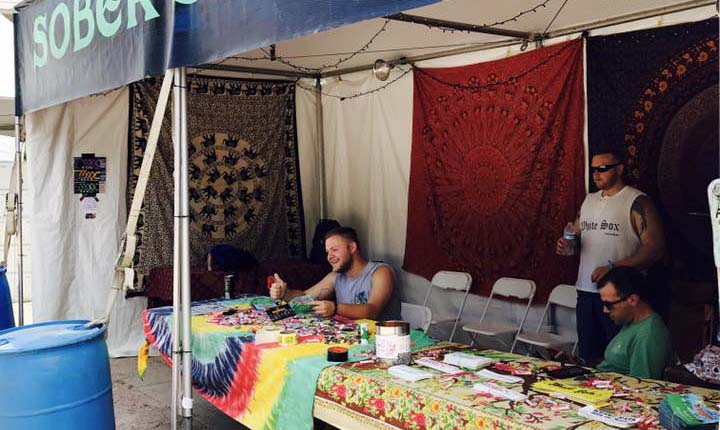 Our coverage this last week has focused extensively on the art and music of Forecastle, so we at LEO decided to explore the festival’s alternative aspects. We caught up with several groups, each unrelated to one another, but that share a desire to create a sense of community within the festival. There are other interesting, non-music parts of the festival not covered here, but with the sort of open-ended event that a music festival is, here are three that we experienced.

The Party Cove is a wild place. It’s loud and hazy, and bodies are everywhere. And if you’re in the pit between DJ sets, you may get caught in one of Strive’s extempore drum circles.

Strive is a local, nonprofit organization for all people of different musical abilities. A cornerstone of Strive’s wellness programs is LifeRhythms, which offers open drum circles at various locations across the city. The organization, founded in 2015 by Nina Rodahaffer and Cheyenne Mize, has hosted drum circles at the Party Cove for the past three years.

“As performing artists and audience members, Cheyenne and I have experienced music from both on and off the stage,” said Rodahaffer. “We feel that the most powerful moments happen when the audience is engaged, and we like to create opportunities for that engagement, musician or not. Forecastle is a natural place for all people to come together and make music.”

The drum circles involve about a dozen hand drums and small percussion including tambourines and cowbells. All that the players must do is follow, build and vamp on the rhythms around them.

“The main change from last year was figuring out how to make the circles bigger and more accessible to the drummers, which meant having drummers stand instead of sit — how hand drums are often played,” Rodahaffer said. “Both years we have received amazing feedback, from participants who thank us for ‘bringing the magic’ and ‘making me feel like part of the festival,’ to people behind the scenes who have told us that our drum circles provide an important element to the festival. Looking around, seeing people of multiple generations making music together, all with smiles on their faces is all the positive feedback we could ask for.”

Strive offers some interesting programs in addition to a monthly collaborative performance, “In the Moment,” that puts artists and audience members in the same seat. Visit www.Strive502.org to learn more about volunteer opportunities and where to find the next circle.

“Who brought their dancin’ shoes?!”

For head Partyguard Mike Foster, it seemed like the best way to end an interview. We exchanged three high fives during this interaction and were definitely interrupted by other groups of party people. We yelled a lot, discussed the captain’s hat-wearing phenomenon, all while Foster filled me in on the squad known as Partyguards.

Saving the party one high five at a time, the group has evolved, moving from a standing ship formerly anchored beside the Ocean Stage at previous Forecastles, to the classic life-guard chair greeting the festival’s main gates. The Partyguards contribute something small but integral to the nautical culture connected to Forecastle.

What qualifies a great Partyguard?

What is the duty of every Partyguard?

“In the front of house, we maintain the life of the party,” said first-year guard John Travisano. “We make sure everyone who comes is feeling loose, feeling ready to go. We work certain shifts, then all of us report back to Party Cove and we dance on the boats and dance with the mermaids. It’s a pretty cool gig.”

Sober Sailing: “One show at a time”

One of the first tents you may overlook after passing through the main gates (located just past the Partyguards) is Sober Sailing. I spent a lot of time in there this weekend. The tent is simply a safe haven for music fans — most of the volunteers there have maintained sobriety for several years. But it doesn’t come easy. A longtime member of the group, Austin Branstetter, had the backstory.

“We’ve all been going to see music for 20-plus years, and a lot of our stories have music involved in it, going to different events. Then, we got in trouble in music. But we still love music, so this is our way of giving back … [Sober Sailing] is a safe environment to spend the weekend and not be influenced by outside issues that can be involved with some festivals, especially with the epidemic we have going on in Louisville right now. It’s bigger than ever that sobriety is an issue. In the past several years we’ve had a voice. We’re here, and there is help available. If you see a yellow sticker or a yellow balloon, you know you’re one of us.”

The sticker, “One show at a time,” is a token of sorts between sober music fans. A tradition passed on from the Wharf Rats (the sober Deadheads), the color yellow is used for its visibility in crowds.

The tent held two recovery meetings each day at 2 p.m and 6 p.m. Most of the volunteers spent their shifts eating candy and telling dad jokes. I was enamored. These people were super friendly and hilarious. Sober Sailing was definitely one of the coolest spots at Forecastle.