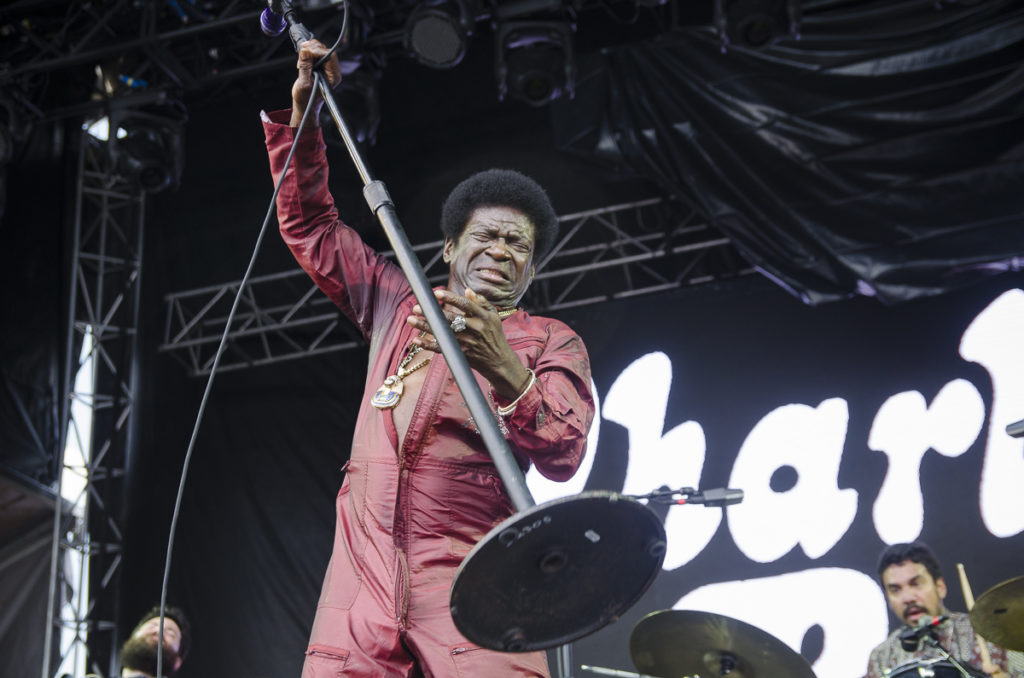 Lara: On the third and final day of Forecastle, I started the day correct by visiting with Charles Bradley & his Extraordinaires at the main stage. A scorching afternoon never felt so cool with that guy and his sassy band on stage — a brief sound blunder easily smoothed over by their slick momentum. Bradley is an inspiring presence. The charismatic frontman has an equally inspiring backstory — he was homeless for several years before starting a career in music, performing as a James Brown impersonator named Black Velvet. He endured further hardships throughout those years, undoubtedly a wealth for material that Bradley expresses in the soul of his songs. Before introducing one of the closing songs, “Changes,” he said, “We will make a difference in the world, to all mankind…” Change begins in the present; Bradley and his talented band certainly steered the course of my day in a loving direction. He held up a bundle of red roses and proceeded to pass them out to the lucky audience, while (literally) embracing them.

Tycho at the Ocean Stage was another favorite set. It takes longevity to succeed as a strictly instrumental band, but the Sacramento-based quartet held it down through sunset. They barely said a word, but most instrumental bands do that anyway. In the thick of it, I somehow felt better after the set — the chillwave was taking effect.

Syd: Take one peek at Charles Bradley and know that he is majestic as fuck. This dude is soul royalty, rocking a jumpsuit that few in their ‘60s can pull off, but to quote Killer Mike, “Homie’s swag is on Kung Fu.” Responding to a shout-out from the crowd, you believe it when Bradley said, “I love you too.” It is the truth from someone who has more than paid his dues and is now following his heart.

Bradley and his. And of badasses are inspirationally boss, kicking out too jams over and over. There is much less glitter in this crowd, an indication that Sunday is that retro feel good meant to get the scene peepaws and grannies (hi there) of Louisville out in full nostalgic force, and Bradley is still showing all these motherfuckers how to do it. Bradley is the coolest man in a sea of cool dudes, an angel from a planet of soulful superheroes here to crush your bad times.

Oh fuck. Bradley had a wardrobe change mid-set and somehow managed to come out even flyer. First, he took a two-song intermission, during which his band cemented their title as The Extraordinaires, because damn these dudes are tight, like a time capsule featuring all of The Wrecking Crew that made Motown (and everything else in the ‘60s), the top shit that it is. So how does Bradley stay the top dog in such a stacked deck? It’s not just his grade-A fashion sense (fuck you if you don’t think his mirrored kicks are some kind of magic), but that voice. Jesus, this dude gets it.

I want to like Weezer so hard. They were my favorite band during the Blue Album years, to the extent that my classmates called me “Weezer Boy” as a derogatory term. Denied seeing them on tour by my teenage, fuck-up parents (for a dollar no less), I stuck with them through Pinkerton, which is like if The Cars recorded a dope ass power-pop record with Albini. After that though, I can think of few bands that flipped harder to my mind.

Scott: PJ Harvey is everything that people say about her: She’s a powerhouse of a human who makes some of the best music out there, carrying that sort of transcendent talent that only a few have. She was the highlight of the day, and it wasn’t even close, but Michael’s been waiting all weekend to write about PJ, so here’s the end of the 24 saga…

3:50:00. It’s here! It’s PJ Harvey day! What a blessed day. And as you may recall from Friday’s recap, I’ve used a running timestamp throughout my recaps to countdown to this momentous occasion, the return of Polly Jean Harvey – an uncompromising artist who sure as h*ck isn’t a road warrior. She’ll do maybe five or seven dates stateside before returning back to Merry ol’ England to write songs about, I dunno, feudalism or whatever allegorical concept she feels like exploring. Her last appearance in Louisville was some time in the ‘90s, and yet she does have an interesting connection to this city.

230,602:10:0. Louisville post-rock band Slint releases what ends up becoming a landmark American record, Spiderland, on Touch and Go Records on March 27, 1991. On the back of the record in the liner notes, a handwritten note reads “interested female vocalists write 1864 Douglas Blvd. Louisville, Ky. 40205.” As I found out in the piece I wrote “The House that Slint Built,” it’s not some spooky compound where the fortune teller lives, but The Highlands home of Brit Walford’s family. The band was serious about this request, and rumor had it that a then-unknown Polly Jean Harvey responded to the call with a letter to the band.

230,602:10:0. The 33 1/3 book series releases it’s installment on Spiderland on November 11, 2010. Author Scott Tennent confirms the existence of the letter from the band, and in an interview told me: “I have not seen the letter, but I was told by the band that it does exist, and that it’s stashed in a box in one of the guys’ garages. I tried to get a copy or a transcript of the letter, but they wouldn’t give it up — they felt like that would be a betrayal of PJ’s trust, which I can appreciate.”

625:1:30. During a happy hour story pitch session, LEO Weekly editor-at-large Scott Recker floats the idea that, hey, maybe I should reach out and see if she’ll talk about the letter to Slint.

608:8:15. “I really only want to ask two or three questions tops… about her writing to Slint. That’s the entire angle,” I wrote to Harvey’s publicist. “Totally understand if she’s not interested, but as Sir Wayne Gretzky once opined, you miss 100 percent of the shots you don’t take.” The publicist responded with a laugh and politely declined the request.

3:30:00. That would’ve made a crazy story, right? A single topic interview right before the festival. Ah, well. Well anyway, hey, Charles Bradley is on right now and he’s simply great. He’s not gonna let being in his ‘60s keep him from running about the stage, peeling your face off with his vocals, handing out roses to the crowd, and whisking thousands of people to another time when Stax reigned supreme and music without soul was simply not an option.

2:45:00. Evidently Foxygen’s been listening to Charles Bradley too. For their return to Forecastle, the baroque pop-meets-slightly psych leaning outfit traded in the vibes for some real glam-tinged soulful rock and roll, brass band included. Jonathan Rado’s full embrace of the idiosyncratic frontman proves he still believes in the idea of rock and roll. He quipped at the crowd, “Who are you checking out next, Franz Ferdinand?” Festivals are inherently funny things, and I enjoy gentle ribbing from artists on that fact.

2:00:00. If Pitchfork has anything to say on the matter, and it turns out they pull a lot of water in this community, Big Thief is about to be a Big Thing. The closest thing to a more art-damage indie rock act, the bands guitar interplay between jangly and ambient married with Adrianne Lenker’s aerodynamic vocals concocted a beautiful mood that was unfortunately stymied by an unforgiving sun. A dusk stage time would’ve been perfect — a happy accident Alvvays enjoyed in 2015 whose sundown set was one of the weekend highlights.

00:45:00. It’s almost PJ Harvey time! I’m about to wild out, and it’s almost like STRFKR (pronounced “strfkr”) knew! Because they were wildin’ out, too. Dancing, crowd-surfing, astronauts! Androgyny! Epileptic fit-inducing LED lights! A real party atmosphere that marries the junky electro-pop of Holy Fuck with the buoyant carnival atmosphere of Of Montreal. 2017 might be the first year that the Ocean Stage has usurped the Port Stage as the HQ for the best undercard sets.

Ha, wouldn’t that have been funny if my entire approach to this article was a countdown to this set, and my only words about it was that it “ruled.” I ain’t gonna do you like that.

00:00:00. Much of PJ Harvey’s new material feels like a funeral march in terms of the rhythm and instrumentation, so it was fitting the band took the stage in formation with bass drums and brass. She’s going to lean heavily on her high-concept new material that’s very dark. Let England Shake is a beautiful and horrifying concept album about WWI and imperialism, a sort of musical take on Ernest Hemingway. “I’ve seen and done things I want to forget / I’ve seen soldiers fall like lumps of meat / Blown and shot out beyond belief / Arms and legs were in the trees,” she sings in “Words That Maketh Murder” from that record, played early into the set. Not exactly make-out-on-your-Mast-Stage blanket material. The Hope Six Demolition Project explores gentrification, war, and poverty. “Hey little children don’t disappear / I heard it was 28,000,” goes the chorus of “The Wheel,” set to lush brass and deep reverberating bass. Mind you, it’s still light outside, we’re at the main stage and Harvey is letting her darkest stuff fly out the PA, casting glances toward the crowd and wearing flowing black garb reminiscent of a sort of gothic Stevie Nicks. She’s probably casting spells on us right now, not uttering a word until she introduces the band right before “Down By the Water.” Of her classic material, “50ft Queenie” and “To Bring You My Love” also made the set, throwing a bone to the ‘90s kids. But her new material is as vital, important, and relevant as anything she’s done before. And boy, did the Forecastle crowd not quite know what to do with it, save for the hardcore fans front and center. Me, I got goosebumps and emotional. I experienced some form of ego death during the trumpet call of “This Glorious Land.”