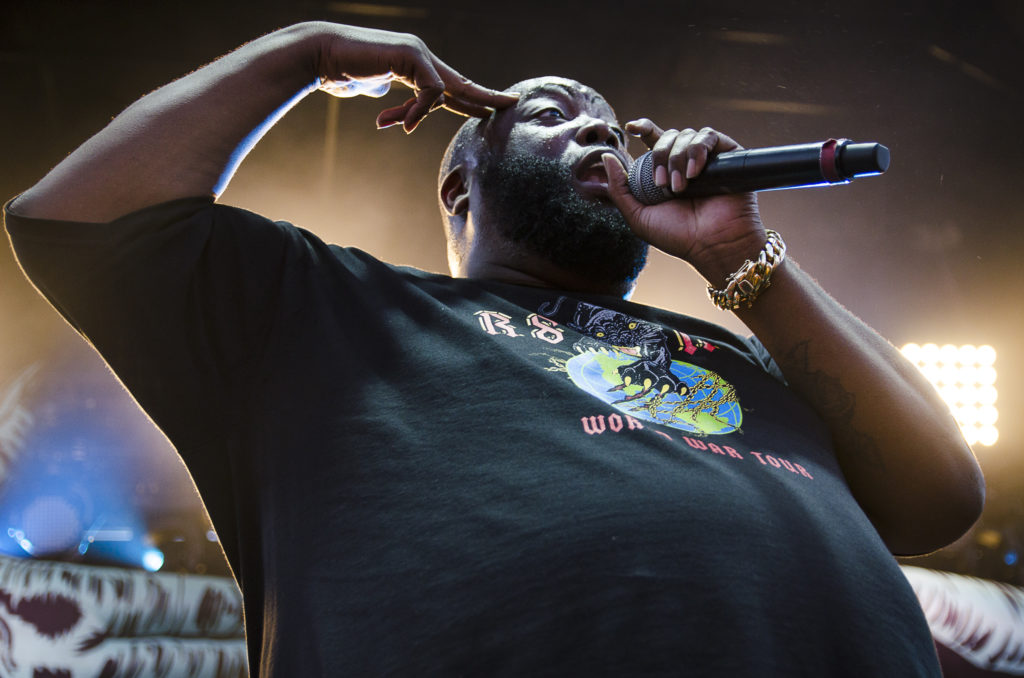 Scott: “These songs are being remixed by the heat of nature,” Mary Liz Bender, drummer/singer of Twin Limb said from the main stage, during their 3 p.m. opening set of Forecastle, talking about the couple of technical difficulties they had at the beginning. But, the thing is, despite the few hiccups, Twin Limb showed how much the band has progressed through the years. They’ve become bigger sounding by becoming more experimental, which is a rare accomplishment, building on the good thing that they started with — a dream-pop, psych folk clever minimalism —and adding a wall of sound full of booming guitar and ambient synth. They don’t sound much different than their early years — they’ve just colored in the lines.

Overall, it was a day of great Louisville bands. For making a genre-jumping record this month, Quiet Hollers sounded like a dialed-in powerhouse, full of punk fury, with a Springsteen sort of urgency, showing that despite all their new angles, they, at their core, are just a straight-up good rock-and-roll band.

Run The Jewels is everything people say about them, but I only could stick around for three songs, because Forecastle booked Teddy Abrams & Friends — the conductor of the Louisville Orchestra and a bunch of other local musicians —at the same time, at 9 p.m. I wish it had been two hours earlier, so I could have caught both, but cutting out of Run The Jewels early ended up actually paying off. Teddy brought up a bunch of Louisville all-stars. Twin Limb played “I’m Afraid Of Americans,” a Bowie cover while the orchestra played a Trent Reznor production. Scott Carney from Wax Fang played Pink Floyd’s “Comfortably Numb.” Cheyenne Mize played an original, which had a Leonard Cohen sort of brilliance to it. White Reaper played “Judy French” which was cool with orchestra parts behind it. Jecorey Arthur and James Lindsey both played a song, and were predictably good. Seeing Teddy Abrams’ set was worth missing Run The Jewels, but I wish I didn’t have to.

Lara: Teddy Abrams added new members, and lost some, but the range of local musicianship put on blast was not missed. It is a vast group, and the result is a live, one-time experimentation. Pee Wee Ellis’s recognizable jazz standard “The Chicken” kicked off their set. It was a fine introduction for just about everyone on stage to have a turn on this fun, energetic tune. The conductor continued announcing performers from his post on piano. Carly Johnson was a crowd-favorite contender. A voice that naturally helped thicken the audience, passing off the first solo to her frequent stage partner, guitarist Craig Wagner. The symphony also debuted a new song composed by Rachel Grimes, titled “Get Ahold of Me.” Cheyenne Mize sang vocals while Grimes watched somewhere from the crowd. James Lindsey followed up with his song “30,000,” bringing Twin Limb back to the stage, for an injection of inspired Louisville hip-hop. But it was Johannes “Brahms / Brahms / Brahms” who induced the first chant of the night. Abrams took on Brahms at rapid pace with “Piano Quartet No. 1 in G minor, Op. 25,” joined by violin, viola and cello players from the Louisville Orchestra.

Syd: The per capita danceablility of Run The Jewels is too high to comfortably comment on, but goddamn they delivered. Having seen them before, I know that they didn’t even need to go as hard as they did, but goddamn did they. This was the spot to be on Friday, regardless of what else was going on, and shame in you for missing it. Did they play the hits? You’re goddamned right they did, although in some cases truncated versions that omitted key verses by the likes of Zack de la Rocha or Danny Brown. Despite that, RTJ absolutely delivered across the board with charismatic bops that were as hook-heavy as memorable. It was an awesome exercise in knowing how the crowd would react and playing to such.

Michael Powell: 51:56:00. You seen that show on the TV, “24”? The one in which Donald Sutherland’s oldest son runs around stopping terrorists from hacking the internet, or whatever, for a day. That’s how I view this year’s Forecastle experience — a ticking clock in the lower third of the screen counting down until, Lord have mercy, PJ Harvey. See, it’s her first time in the area in a very long time, and she’s released two, not just great, but important albums (“Let England Shake” and “The Hope Six Demolition Project”) this decade. So the promotional poster’s large type might have you believe that, ugh, Weezer is the headliner this weekend, but that’s categorically untrue. Polly Jean Harvey on Sunday is going to do some tectonic shifting shit this weekend at Waterfront Park. Believe.

Ah, but we’re not there yet. That’s OK, the festival is kicking off with some real, local royalty and folks I feel lucky to call friends — Twin Limb. I love them for myriad reasons, not least of which because they’re the type of local act that unimaginative writers love to drop in the line “surprisingly from Louisville,” since they don’t sound more like Beach House and Sigur Ros than Bonnie Prince or whoever the fuck. The high, afternoon sun doesn’t do the trio’s majestic cosmic anthems justice unfortunately, but them’s the breaks sometime. Speaking of the breaks, I would’ve really liked to photograph their set for you, dear reader, but I got stuck at the front, a swath of media folks corralled awaiting for paperwork that took a comically long time to arrive.

51:00:00. The perennially wonderful Real Estate soundtracked Friday’s happy hour with a cross-catalog selection, including a surprising amount of material from their practically flawless Atlas, of breezy psych-tinged electric folk. A sort of indie boat rock — not yacht rock.Alex Bleeker came up tough with one of the best stage banter jokes I’ve ever heard, quipping about their late night show at Headliners: “I used to get my haircut there.” Headliners. Fucking solid. Real Estate owns. I found out for that for said afterparty, their drummer got food poisoning and soldiered on without him to pretty good results. That’s the mark of a great band: Showing up in the face of adversity.

51:25:00. I generally avoid the Ocean Stage during the EDM shows because I’m not a fucking teenager, but Giraffage’s version of Drake’s “Hotline Bling,” with actual iPhone ringtones folded into the mix, was actually pretty dope.

48:55:40. It’s pretty cool that Jaye Jayle, one of the darker and more challenging fruits of the Louisville scene, was part of the card of local artists peppering this year’s lineup. They took full advantage of going full weird for their early evening Port Stage set, opening with vintage synth ambiance and live impressionist painting to accompany. The vehicle of Young Windows’ Evan Patterson and members of Phantom Family Halo, Jaye Jayle is a fantastic, sprawling cinematic exploration of dusty isolation and growling arid torch ballads through a Ennio Morricone prism. Probably did tractor beam the EDM kids over, but that’s OK — Friday really showcased the quality and diversity of this city’s music. And while I’ve always respected Evan and friends for their artistic vision, I also respect artists will still take the stage in all black garb and cowboy boots on a balmy July evening.

Speaking of the Ocean Stage… Forecastle, we gotta talk. Last year, Danny Brown commanded the a largest crowd I’ve seen under the I-71 overpass. Friday’s Wakka Flakka Flame set was maybe double that. I couldn’t even attempt to get to the photo pit to grab some shots. It spilled from outside the bridge’s shadows to the outskirts of the beer and food vendors, shoulder to shoulder. Meanwhile, a half empty field in front of the Mast Stage bared witness to NEEDTOBREATHE, which I friend of mine described as “the music Taco Bell used in commercials to hype up the chalupa” or “in the background of those PSAs about how you wouldn’t steal a car, so don’t steal MP3s,” and I described as “RnR for folks who find Cage the Elephant too edgy” and “NEEDTOFART.” The hip-hop density of the Forecastle lineup leaves a little to be desired, and yet, those stages are always packed. This crowd is thirsty for the type of idiosyncratic, personality-driven hip-hop of the likes of Wakka Flakka Flame, and last year’s Danny Brown, and ilovemakonnen the year before. Put ‘em on the big stages. And bring more. The crowd speaks for itself.

45:55:00. That came true yet again for Run the Jewels, commanding a sprawling mass of sweaty tank tops enveloping the very fine Joe’s Crab Shack Stage (that’s what I call the Boom Stage, it’s basically a free ad for Joe’s, now offering a create-your-own steampot with a half pound of snow crab and your choice of seasoning!). Now if I can put on my old guy hat for a second and offer you a Werther’s Original before “Matlock” comes on here in a second, let me tell you young’uns about the time back when Run the Jewels was simply known as “El-P and Killer Mike” and played the Ocean Stage at like 4 p.m. back at Forecastle 2013. You knew then this group was special, and lemme tell you, nothing pleases me more to know that one of the most important, and palpably hype hip-hop acts today are two middle-aged people. They’ve leveled up their stage presence — their signature handsign in a colossal inflatable form towering above — and the banter, which given Killer Mike’s community activist roots comes off more like a sermon, instructing the crowd to both pick up your fallen brethren in the crowd, and stick your selfie stick up your ass. “Close Your Eyes” and the particularly trenchant “Lie, Cheat, Steal” sounded lush and punchy barreling through the park.