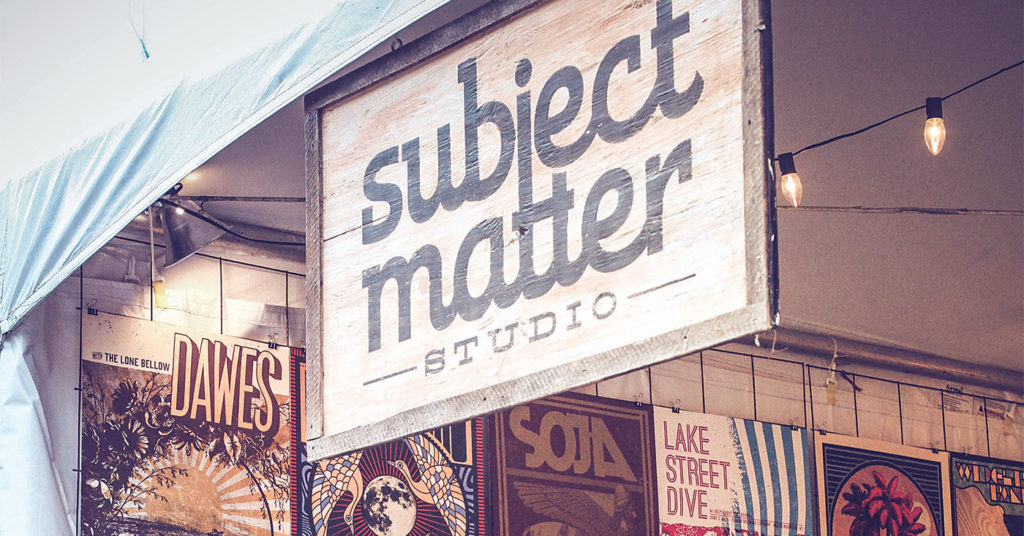 The 15-year-old Forecastle Festival bills itself as a music, art and environmental activism festival. The music, well, I’m sure you know about that. And the Forecastle Foundation is hard at work “protecting the world’s natural awesome,” as it likes to describe the environment. But you may not be as familiar with the art.

The highlight of Forecastle’s art component is the API Poster Show. The American Poster Institute, or API, is a nonprofit organization dedicated to promoting the poster as an art form. Some of the ways it does that is by organizing exhibitions, publicizing artists and providing sales opportunities. One of many promotional locations is the annual Forecastle Festival.

As a result, Forecastle has become one-stop shopping for collectors to come back year after year for the latest music poster, many by Louisville designers, or to find one that is elusive or out of print.

Among those in the show is Louisville native Justin Kamerer, aka Angryblue, who also designed the Forecastle poster for the fourth year.

“Since I’ve started, I’ve just tried to stick to a theme of underwater, Louisville and surrealism. They seem to go well for the audience, so we keep running with them,” Kamerer said. “This year, I decided to bring a big ol’ pirate ship back into it, as I’ve left it out of the past few and thought [about] a Louisville skyline, including a giant Louisville slugger (that’s in our skyline, right?) and the Belle of Louisville.”

As she explained to LEO Weekly (“Meet MissHappyPink,” Feb. 10, 2016), her name came about because, “Well, I’m kind of a jerk and was poking at my partner [now husband Kamerer]. He creates under the name Angryblue and, for years, drew mostly skulls and bones. When he started to branch out and incorporate flowers and other elegant items into his work I started making up silly names for him. One of those was HappyPink and, after I started printing myself, I thought it was too cute not to steal and use as my own. The ‘miss’ got added on after the first year — it just sounded better in my [opinion] so I stuck with it. [As for Brittney Cat], I’ve been going by [it] for 14 years. Simply put, I love cats!”

Holly Weyler McKnight, Forecastle’s “First Mate,” said the show has relocated from the Kentucky Landing to near Party Cove on the east side of the festival. “The majority of the official festival merchandise was designed by members of the API,” she said.