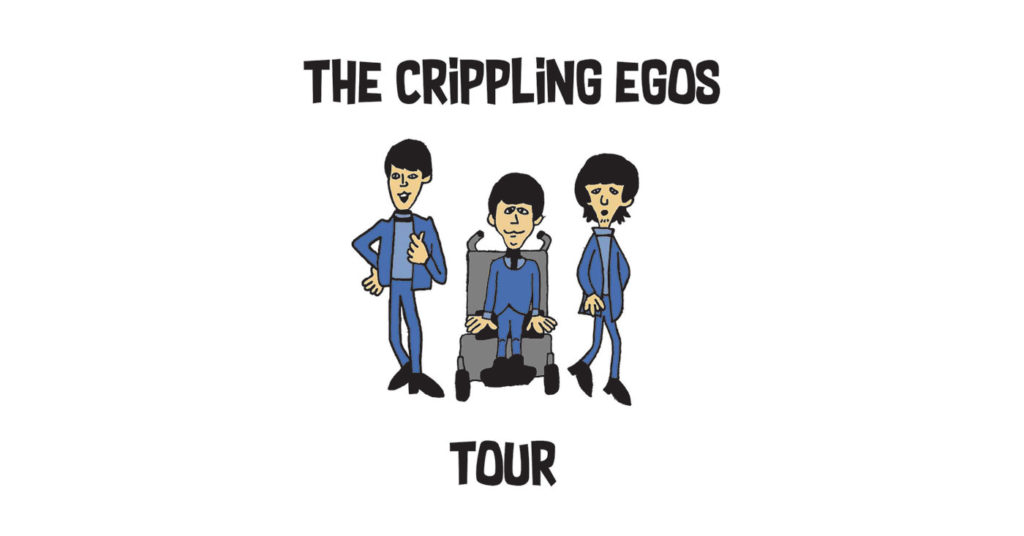 The Crippling Egos Tour highlights three very different comedic voices: Joe Bates is cocky and immature, often coming off like Gordon Gecko, if he were the president of the douche-iest fraternity in Jersey; Lucas Waterfill, who has cerebral palsy and performs from a wheelchair, offers dry, clever commentary on how a disabled man navigates the world; and Trent Mabry radiates a pseudo-hippy, nice-guy vibe. Two from the Indianapolis-based troupe, Bates and Waterfill, took a few minutes to talk to us about comedy and the tour.

LEO: So how did you all get into comedy?
Joe Bates: I was 18, and I saw Dat Phan win ‘Last Comic Standing,’ and I knew I was way funnier than him. So I totally started doing stand up out of spite. I was terrible and didn’t try it again for another seven years.

Lucas Waterfill: I just graduated college and couldn’t really find a job. So I just figured I should give it a try and started doing open-mics. As it turned out I was pretty good at it.

Where did the name Crippling Egos come from?
JB: Well, I have a huge ego. Lucas has cerebral palsy and is in a wheelchair, and he always comments about being crippled. So that’s the Crippling Egos. Trent is an asshole, but we didn’t want to put that on the poster.

Do you really think you have the biggest ego?
JB: The thing is, Lucas does. But he’s also in a wheelchair, so it’s fine. Mine is just portrayed poorly because I’m constantly telling people how great I am.

Were you all funny growing up?
JB: I moved around a lot, so I always had to make new friends. At one point I went to seven schools in seven years. I was running from the law. No, my dad was a chemical engineer, so he got moved around to a lot of different plants all the time. Two different places I lived, independently mind you, deemed the term ‘Joey Jokes,’ when someone told a bad joke. Because I was always telling bad jokes. Neither place knew the other used the same term for that. So yeah, I sound like a great comedian people should come out and see. The other two guys will be way funnier than me, I swear.

LW: Yeah, I had always been a funny kid, who liked to talk in front of people and the center of attention. Because I grew up watching Carlin, Louis C.K., Eddie Murphy and Chris Rock. That became a bucket list thing for me. To have a room full of people laughing at you. To have that much control over their emotions. To make them happy. That’s something I wanted to do.

Those comics are very open and honest on-stage. Did they help you embrace your cerebral palsy in your material?
LW: Sure. Looking at it through that lens helped a lot. It allowed me to be critical of the way people would treat me, but it also allowed me to be critical of my disability. I look at how people treat me and interact with me. And if you watch Carlin or Louis, you see they’re very much talking about how people interact with them, whether it’s politically or in relationships. It’s all kind of the same.

When did you realize your disability was something you could laugh at?
LW: Oh, from a child. My friends and I would use it all of the time to mess with people. It goes back to how people treat people with disabilities. They think you can’t handle yourself, or think you’re stupid — so I would take full advantage of that.

When you’re on the road like this, there has to be a lot of temptation.
JB: Trent and I are both in very committed relationships, so feel free to print that we both love our girlfriends very much. But Lucas? He’s hung like a horse. I’ve seen it — he’ll do fine. And Trent, he looks like a pothead, but he doesn’t do anything. He doesn’t drink. He doesn’t do anything, and he’s not even religious. He’s just a straight-laced son of a gun.

Then who’s the most likely to bomb?
JB: Oh, that’s a rough one. What’s your headline? ‘Comic On Tour Throws Buddies Under the Bus. One is Handicapped?’ It’s a long headline, but it’s a headline.