It’s gotten to where the heat starts to deplete you, and working out in it is pure uninhibited bullshit. You add a mean-muggin’ son with sweat, sawdust and tree sap, and boom — you’re ruined, flattened out, squashed! You spend the rest of your evening feeling like a gloopy, bug-bit mess, and that’s even after a cold shower. My dogs hate it too, the chihuahuas have revolted against us, these prim and proper pups are refusing to place even a dewclaw into mother nature, preferring to spend their time drifting and dreaming away on a fancy pillow before an oscillating air tower beneath a ceiling fan in an air-conditioned house, with their chilled water dish but a mere stretch away. I mean Jesus Please-us, I wish I could lay atop a fancy pillow with my best friend all day, idling away the few moments I had between snack time, toy time, pet time and fart time; completely oblivious to the mental, physical and societal melt down currently cooking out there in the great big wide open.

Meanwhile, I’m over here smoking more because I’m a disgusting human being, and eating less, because food’s a mess, and when I do partake of the daily bread, it’s usually take-out, because the very idea of standing over a hot stove sounds like puke to me, so it’s been wings, beef pho, grinders and nachos — that compacting, get-it-over-quickly food, hogged down and rated using the British Invasion scale, “Clapton for awful and Dave Davies for eh, it’s OK.”

I’m slouching, disinterested, wearing clothes I hate (fuckin’ shorts! Fuckin’ old merch shirts! I hate that fuckin’ shit!), and basically spending every moment I’m not at work hiding behind closed doors, ignoring whatever ignorant shit you’re getting into. Hell we’ve been so busy recuperating and reforming by drinking tea and watching the cool, damp and meticulous crime films of Jean-Pierre Melville, while in our underwear, that I haven’t even been paying attention to the open, salt-covered sore of conflict that is the internet.

I did see where some billion-year-old Neanderthal frontman for a Jimmy Carter-era crap band I had never even heard of before — because I only listen to the juiciest, most bodacious and thumping tracks in the known universe, and I have zero tolerance for ultra-wack, derivative nonsense — has thrown a behemoth temper tantrum on stage, in where he verbally abused a woman who was in attendance to protest the very fact said billion-year-old neanderthal frontman and his band of senior citizens have made a career(?) being verbally abusive, because that’s what being a “real,” or authentic (i.e. ancient), punk rocker is all about.

I mean, when you have punk rock, which is supposed to be protest music at the forefront of the protest, get its ass protested by one of its own, you have to stand up and cheer, and I haven’t actively cheered for anything even remotely punk rock since like 2005, when I saw that footage of Danzig getting punched in his kisser, because… That. Was. Awesome! But I will say this — If you young punks want real change going down inside your church, you can’t stop at a sign, because these punk rock Wilfred Brimleys are not gonna just put down their guitars and shut the fuck up. They think they still got something to say (they don’t), and they’re gonna keep on chugging out their songs (sadly) about wieners and the government and the inner struggles of being an old, white, straight dude “walking alone” through this harsh timeline of glue sniffing and heterosexual fucking from the male perceptive only.

So you kids take heed — you’re gonna have to burn them out, topple, trample and overthrow that decrepit odious lot completely. You’re gonna have to make short work out of a lot of dead useless weight, and good luck to you and your peoples as you cast these tattooed Rodney Dangerfields into the pit of hell. Salute!

And so yeah, that’s about all the American terror I’ve been able to digest now that we’re in the thick of the heat, but fortunately for us, with our blackout curtains, our house is basically a habitable, pet-friendly, gas station beer cave that happens to have a TV constantly showing French crime films from the ‘60s, so do like me and stay cool, stay sane and don’t hurt nobody. Peace. 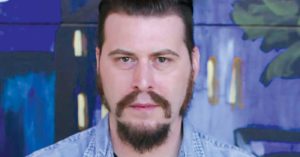