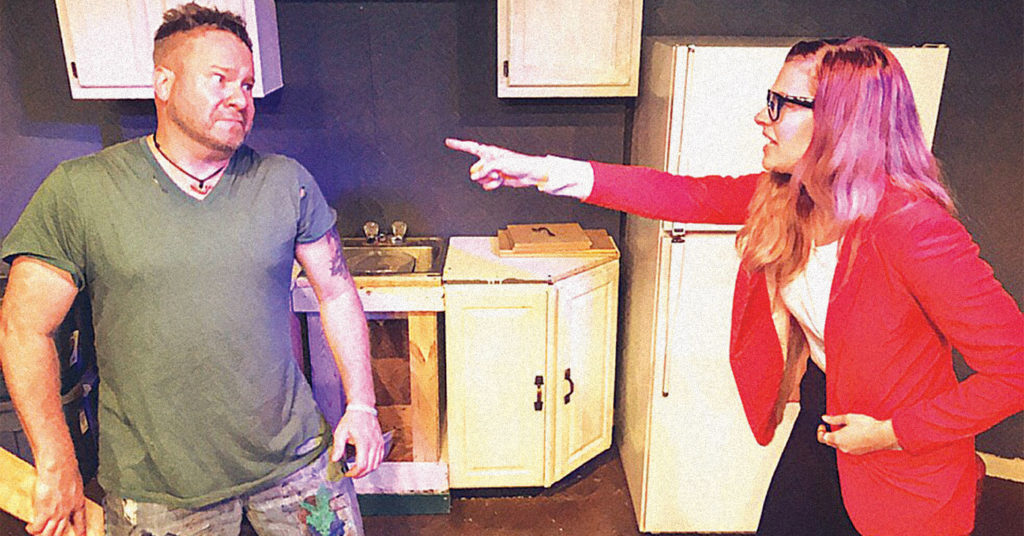 In film and television, the apocalypse usually takes the form of a big bang followed by an epic voyage across a sweeping landscape. It’s Mad Max at the Thunderdome or on the Fury Road. Or it’s Rick Grimes leading his band to CDC headquarters while fighting one of the Walking Dead. Or if you want a bit of gender balance is Melanie Griffith in “Cherry 2000,” driving her hotrod across the desert to help out a yuppie whose broken robotic mistress needs a spare part.

But let’s face it, the world is just as likely to end, as T.S. Eliot put it, “not with a bang, but a whimper.” And the intimate space of a theater stage is the perfect venue for speculating about how that might play out.

Less than a decade ago, an apocalypse played out in cities all across America as the foreclosure crisis led to an epidemic of abandoned homes in cities. In Florida alone, tens of thousands of homes, many of them clustered in booming suburbs, populated by typical families with kids, dogs and bicycles, abruptly went silent as under-water families walked away from their mortgages.

“Bethany,” a scrappy, dark comedy by Kentucky native Laura Marks, is set on one of those whimpering, post-apocalyptic suburbs.

When the play premiered in New York City in 2013 (Marks had just graduated from The Juilliard School, where she studied playwriting), a New York Times critic wrote that the play “reminds us that the distance between self-preservation and pure ruthlessness can be collapsed with alarming ease.”

A new production at The Bard’s Town Theatre (the regional premiere, I believe) certainly lives up to that judgment. Directed by Doug Schutte, this “Bethany” has an almost cold-blooded lack of sentimentality that is, in its way far more chilling than if it asked us to sympathize with the characters.

The main character, Crystal (Katye Heim), is herself a victim of the foreclosure crisis. A single mom, she lost her home — and when the authorities discovered that she was living in a car with Bethany, her 5-year-old daughter, she lost Bethany, too. Crystal doesn’t have much: just one suit (and no money for dry cleaning) and a job selling Saturns on straight commission.

But Crystal has a single-minded focus on doing whatever she needs to in order get her daughter back. She’s resourceful. And she understands the art of the squat. She knows that with so many people walking away from mortgages, the utility bureaucracies can’t keep up. As the action opens, she steals into an abandoned home that still has appliances, running water and electricity. With the house as her base she plans to fool her social worker into thinking she’s stable enough to regain custody of Bethany.

Her fine plan is nearly derailed when she discovers that another squatter — Gary (Kenn Parks), a paranoid with a florid imagination — is already in residence. Gary, it turns out is a quivering mass of fearful bluster — and, though he likes to swing a plank as if it were a club, once Crystal determines that he’s no threat, they settle down as cautious housemates. And when social worker Toni (Carol Dines) comes around on an inspection visit, Gary impersonates a plumber, with sufficient aplomb that Toni inquires whether he could so some work for her.

Meanwhile, Crystal’s plan for recovering her daughter hinges on making one big sale. A motivational speaker named Charlie (Doug Schutte) is interested in a Saturn Red Line — and the commission would dig Crystal out of her hole — if she can close the deal before her dealership goes under and before her hostile boss, Shannon (Kimby Peterson) finds a way to shaft her.

So, as with most post-apocalyptic scenarios, there’s a race against time. But this one plays out in a Saturn show room and an abandoned house. The stakes are high — though we never get a glimpse of Bethany. And when it turns out that Gary’s sleazy prosperity pitch is compounded by the presence of another woman (Patricia, played by Mandy Kramer), the tension ramps up.

At the multiplex, the apocalypses come with winners, losers, heroes, antiheroes (with endearing character flaws), villains and unambiguous endings.

You won’t find any of that in this fast-paced play (with Jake Beamer as fight choreographer and Cheryl Brumley as assistant director). Here, the action culminates neither with a bang nor a whimper — but with the sound of a bone-chilling thud.