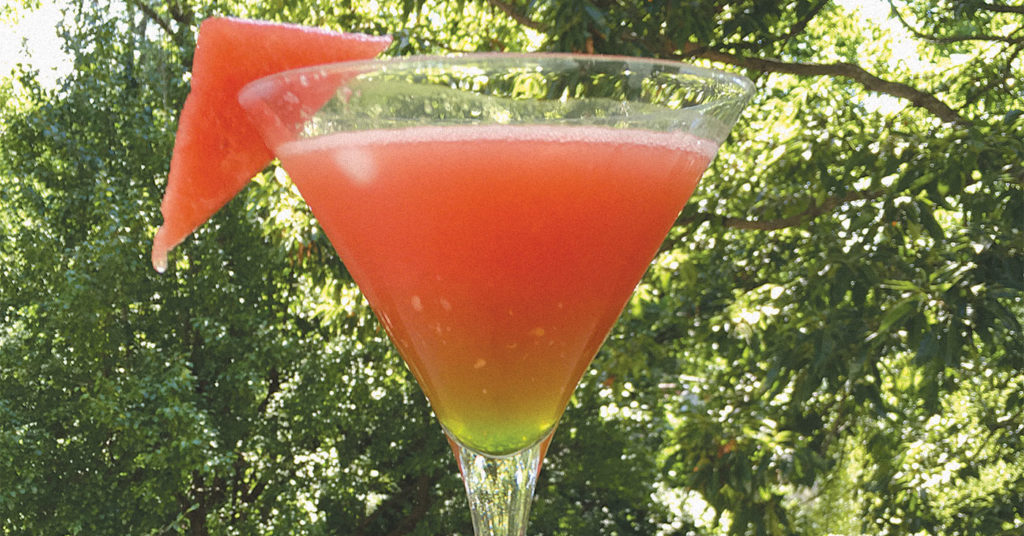 One of my favorite childhood flavor memories of summer is of the crunchy, sugary liquid goodness of watermelon. It was a seasonal treat, since I grew up in the glory days of Birds Eye, and fresh anything appeared in grocery stores only at certain times of the year. It was truly summer, with freedom from school and all day to play outside, when pale green mounds of stacked watermelons appeared outside the automatic doors of Gateway supermarket.

The watermelon ritual in our family involved watching my dad carve it into big chunks, and my mom slicing it into cubes for the bowls. Seeds remained since my younger brother and I had a fierce competition to see who could spit them the farthest. (Obviously, we were allowed to do this only while eating outside.) Naturally, being about 8 and 5 years old, we spit them at each other when our parents were not looking.

One summer, in a fit of self-reliance, we planted some of those seeds in order to harvest our own watermelons. We eagerly watched them sprout, grow into long twisty vines over the grass of our backyard, flower, and then — oh yes — small fruits formed. They grew to the size of tennis balls, turned black, and rotted.

That pretty much sums up all of my subsequent experiences as a gardener. If you love them, please do not ask me to look after your houseplants when you are going out of town. My lack of a green thumb is all the more humiliating because watermelons apparently grow all over the world.

Citrullus lanatus is native to central Africa. The ancient Egyptians grew and ate watermelons as early as 2000 B.C. Since the fruit was a great source of liquid in an arid climate (not to mention disease-free, unlike much available water), watermelon spread to countries around the Mediterranean and eastward to India. The Chinese began cultivating the plant around the 10th century.

Accounts vary as to whether watermelon was introduced to the Western Hemisphere by Brazilian slave traders or by the Spanish conquistadors. In the 18th century, French trappers propagated watermelon in Canada and throughout the Mississippi Valley. Famously, Native Americans taught Europeans to grow corn. So it is certainly fair that many tribes, especially in the South and Midwest, in turn started growing watermelon brought in by the Europeans.

Many cookbooks in Colonial America contained recipes calling for watermelon, including in jams and preserves. Instructions for turning the rind into watermelon pickle (something one of my grandmothers did every summer) were commonly given, too. Ironically, by the 1830s — in an era in which whiskey was considered a cure-all — watermelon, of all foods, was considered harmful. Happily, we got over that.

Now that summer has started, watermelons are showing up in groceries again. A few local chefs may be incorporating the melon into salads and desserts. But the best way to enjoy it is simply to bring home a melon to savor on the back porch. Many markets sell it in plastic-wrapped wedges, which saves the hassle of both figuring out when a melon is ripe and of carving up a 10-pound specimen.

To me, the best beverage to pair with a cold serving of sweet watermelon is a frosty glass of very tart, freshly-made lemonade. It’s the ultimate duo to vanquish summer heat. Do not spoil the moment by using powered lemonade mix. Making the real thing is easy enough, especially if you have a juicer. Here’s a recipe adapted from Shelia Lukins’ classic USA Cookbook:

Strain the juice from 12 lemons (about two cups) into a large glass pitcher. Add four cups of water, ½ cup of sugar and stir until the sugar dissolves. Add some thin lemon slices and fill with ice. Serve.

Also fairly revoltingly wholesome. So to give my summer watermelon a buzz, I consulted the delightfully-titled “Tequila Mockingbird: Cocktails with a Literary Twist” by Tim Federle.

Every recipe name in the book is a pun on a famous classic. Some examples — Rye and Prejudice, The Turn of the Screwdriver and Vermouth the Bell Tolls. All right, the names may be wince-worthy, but I promise the drinks are good. Here’s the introduction and recipe for Brave New Swirled:

“Imagine a world dominated by antidepressants and governmental control over reproductive rights. (Oh. Wait.) Written in the thirties, Brave New World could’ve been copy-and-pasted from today’s headlines. … While [author Aldous] Huxley was an outspoken fan of psychedelic drugs, you can legally freeze your brain with a swirly smoothie featuring …watermelon.

Add the vodka, watermelon, lemon juice, sugar, and a handful of ice to a blender, running until smooth. Pour into a cocktail glass and float the liqueur on top. No matter what your political leanings, one gulp and you’ll be ready to fight The Man.”

Or at the very least, you may be in the mood for a watermelon seed-spitting contest. •