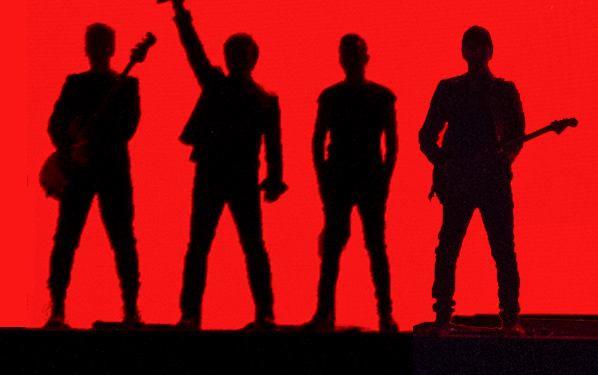 The days leading up to the concert, my Facebook feed was filled with posts of Joshua Tree anticipation, along with photos of original 1987 Joshua Tree tickets, vintage Joshua Tree T-shirts and U2 posters dragged out of storage. Friday night through Saturday, every second or third post was the obligatory “I-was-there” post with photos of concert goers, their middle and high school-aged children in tow.

Of the Millennials who were there, I wonder how many first encountered Bono as a guest character on a “South Park” or “Simpsons” episode.

As one of my Facebook friends, an Irishman who now calls Louisville home, posted, “What’s the difference between Bono and God? God doesn’t run around Dublin pretending he’s Bono.”

That’s the Bono I expected to see Friday night. And I thought that was the Bono who marched onto stage opening the concert with “Sunday Bloody Sunday,” “How long, how long must we sing this song?” Yeah, 30 years later, and Trump’s America feels more repressive and regressive than even Reagan’s 1987. In the midst of his “Make America Great Again” populist triumph, a 30-year anniversary tour, revisiting an album whose core concept was an exploration of America, the myth, vs. the real America, The Joshua Tree 2017 tour had to be an activist event.

Instead, it was a centrist, diplomatic Bono who showed up and reassured the crowd that whether right, left or center, they were all welcome. It was a conciliatory Bono who told Rolling Stone magazine, after the first concert of this tour, that he wanted the people who voted for Donald Trump to feel welcome.

Some Joshua Tree songs, such as “Bullet the Blue Sky,” are inescapably politically charged, and Bono did dedicate “One Tree Hill” to bipartisan victims of gun violence, Rep. Steve Scalise and Rep. Gabby Giffords, who was in the crowd at Papa John’s Cardinal stadium.

However, if Bono is playing God during the Joshua Tree tour, he’s angling as the “invisible hand of God,” thanking the crowd for welcoming him and his Irish bandmates into our country and slipping subversive references to Trump’s Build-That-Wall America into the mesmerizing video that plays in 8k resolution on a 200 x 45-foot cinematic screen behind the band.

Composed by Anton Corbijn, whose photography accompanied the original Joshua Tree album, the series of short films takes a bizarre turn during the song “Exit,” displaying a scene from a 1958 CBS television series “Trackdown” that uncannily features a conman named Trump who visits a small town and tries to convince the people that only he could prevent the end of the world by building a wall around their town.

If anyone feared the reception of this footage in a mining state that voted overwhelmingly for Trump, they’re resting easy now. As it was too oblique, too late in the concert, too tempered by Bono’s pleas for us to all “find common ground by reaching for higher ground,” a statement he told Rolling Stone was “the most important line” he delivers on stage at each performance.

It was a unifying concert for a generation that first heard the music as teens living in mall-culture America — a nostalgic tour for all the children of the ‘80s, even those who grew up to vote for Trump.