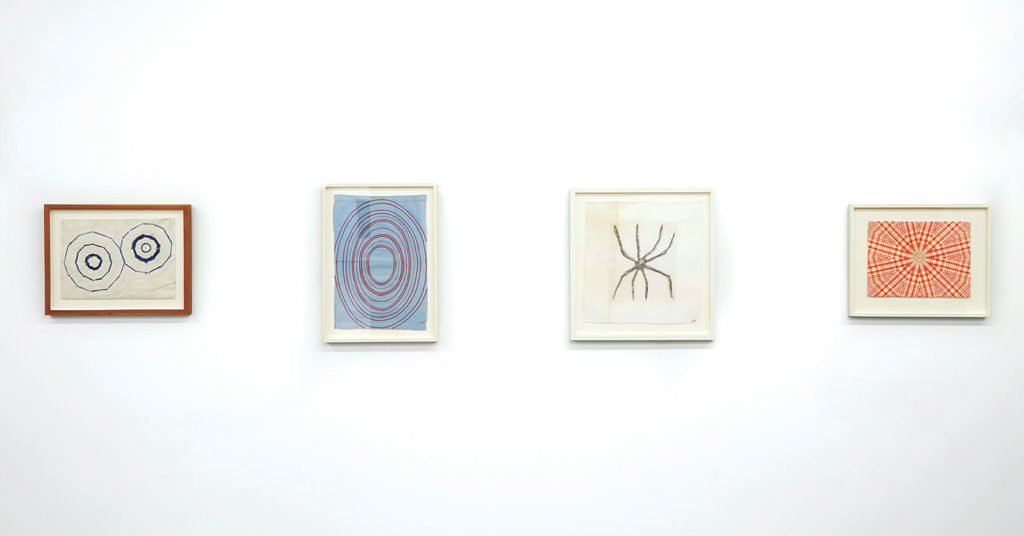 Lines are natural connectors, forcing our eyes to travel from point A to B. Most textile art is composed of lines; after all, thread is a thin fabric line. The current exhibition at the Kentucky Museum of Art and Craft, or KMAC, “Thread Lines,” examines this connection between lines and sewing, knitting and weaving.

The show was curated by Joanna Kleinberg Romanow for The Drawing Center in New York City. That’s where KMAC Curator Joey Yates saw it in 2014.

“‘Thread Lines’ fits firmly within the KMAC mission to promote contemporary practices that bring attention to materials, production and labor,” he said. “Sewing is touching the fabric, it’s tactile. It has a handmade element. [In contrast,] painting uses a tool. It’s made with a tool, a paintbrush.”

There are 15 artists represented with work dated from the mid-1960s to the present. Come for the blockbuster names — Louise Bourgeois, Lenore Tawney — but stay for the lesser-known artists.

My attention lingered over the Monica Bengoa mixed media piece with the long title: “One Hundred and Sixty Three Shades of Yellow, Green, Orange, Red, Purple, Brown, Grey and Blue (so far).” The site-specific work is constructed of drawings, embroidery and photographs. The small hoops enclose the embroidery and photography of fruit while the drawings of additional food connect the hoops. The result is a cornucopia that needs to be seen to be truly appreciated.

“It’s a play on Dutch still life paintings,” said Yates. “It’s not what she well known for. She forced herself to learn embroidery.”

As for the big-name artists (Yates refers to them as the pioneers), the textiles featured give a suggestion of their talent, but is not their best-known projects or the media they usually work in.

Bourgeois is known for her sculptures of spiders, especially “Maman.” Here we see her drawings on linen dinner napkins. It turns out she was once a tapestry restorer and was, well, a hoarder. Her stash of napkins became the support for her untitled drawings, including — of course — a spider.

Yates is an admirer of Bourgeois. “I consider [her in a] small group of artists that think of everything. While they had this, they come up with this.” He even has a way to incorporate her love of spiders into the theme of the exhibition: “Spiders weave, they’re the sewers of nature.”

An influential artist in the expansion of fiber and textile art, Tawney’s “Union of Water and Fire” first saw life as an ink on paper drawing. She then created, 10 years later, the abstract red and white linen piece featured in the show.

The exhibition also includes two videos. Anne Wilson’s “To Cross (Walking New York)” illustrates the process of weaving using the columns in The Drawing Center as a loom. “Thread Routes — Chapter 1” is the first in a series of six films by the artist Kimsooja. It was filmed in Machu Picchu, Peru showing their ancient methods of winding threads on straps and sticks.

The museum shop continues the theme with jewelry by fiber and metal artist Mariko Kusumoto.