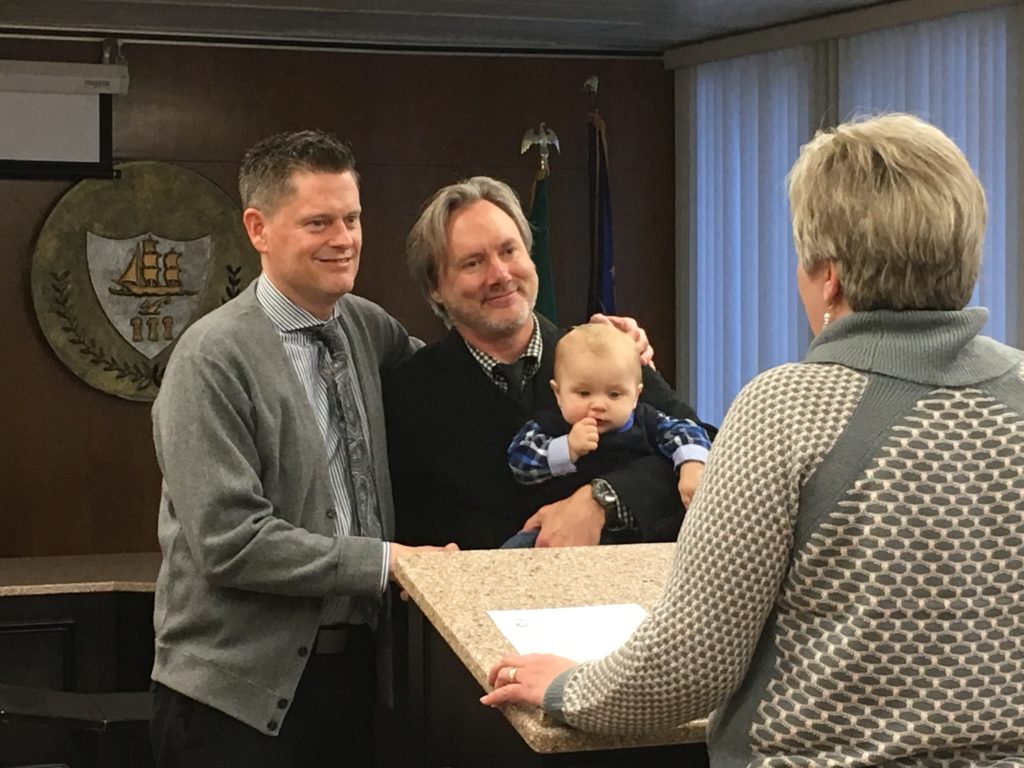 Often when we think of weddings, we think of those like the others in this issue: lovely affairs that have been well-planned and are resplendent with beauty, meaning and true love. However, there are those that aren’t quite as planned but indeed just as meaningful and indicative of true love, if not more so. Speed Art Museum Director of Marketing and Communications Steven Bowling and his husband, Andrew Crocker, share one such story.

They met in May 1997 and have been together ever since. Five years into their relationship, Andrew proposed to Steven, but of course, that was a long way off from national marriage equality. After another five years, with marriage still not legal, they traveled to Cancun, where they committed to each other privately on a beach.

Then, in May 2015, a little boy named Leo entered their lives and changed everything. “We had always talked about kids – being Catholic, both of us grew up around lots of siblings and cousins – but the timing never seemed right,” Steven explains. “I was either traveling for work, Andrew was getting his master’s degree, or adoption just seemed too overwhelming. Plus, we lived in Kentucky at a time when you couldn’t adopt as a same-sex couple, only as a single gay parent.

“When we moved to Indiana, we became friends with a couple who had emergency custody of a precious 3-month-old baby boy. They were looking for a couple to become his parents, love him unconditionally and give him an opportunity to thrive and succeed in life. Without hesitation, we said YES! Weeks before we were approached to adopt him, we had decided that children were just not in the cards for us, and that was okay. It’s funny how the universe works sometimes.”

The couple gave Leo the home he deserved and loved him like their own. Eventually, they began the proceedings to formally adopt Leo. Little did they know, there was one key ceremony that could make the whole process a bit easier. “We met with the adoption attorney on December 30, 2015, and he recommended that we get married,” Steven recounts. “We decided that from a historical viewpoint, it would be nice to get married in the same year that same-sex marriage became legal for millions of couples across the United States. The challenge was timing. Andrew immediately went online and applied for our marriage license and contacted the Floyd County Courthouse while I started calling family.”

And so, with Leo in tow, the couple married on December 31, 2015. Though perhaps not the wedding they always dreamed of, both agree they couldn’t have seen it happening any other way. “I love it,” Steven affirms. “It’s a unique story that’s all ours, and the fact that it was so impromptu helped the ‘planner’ in me to let it go and just live in the moment. We still talk about having a reception with friends and family, but raising a toddler seems to have taken all our time. And planning baptisms and birthday parties suddenly takes priority!”

Though Steven, Andrew and Leo got their happy ending, Steven is well-aware of the fact that many in our country are not as fortunate. He and Andrew know that as they raise Leo, illustrating to him the diversity and disparities in society will be absolutely vital. “As new parents, we want our son to grow up in a world where we embrace each other’s differences, treat all people equally and show kindness to everyone,” Steven emphasizes. “I don’t see these traits in our current administration in Washington and it is truly troubling. It can be hard at times as a gay married couple, but we do understand the privileges we have as white men and know that others are not afforded the same. So it’s all of our responsibilities to bring attention to injustices in our communities.”