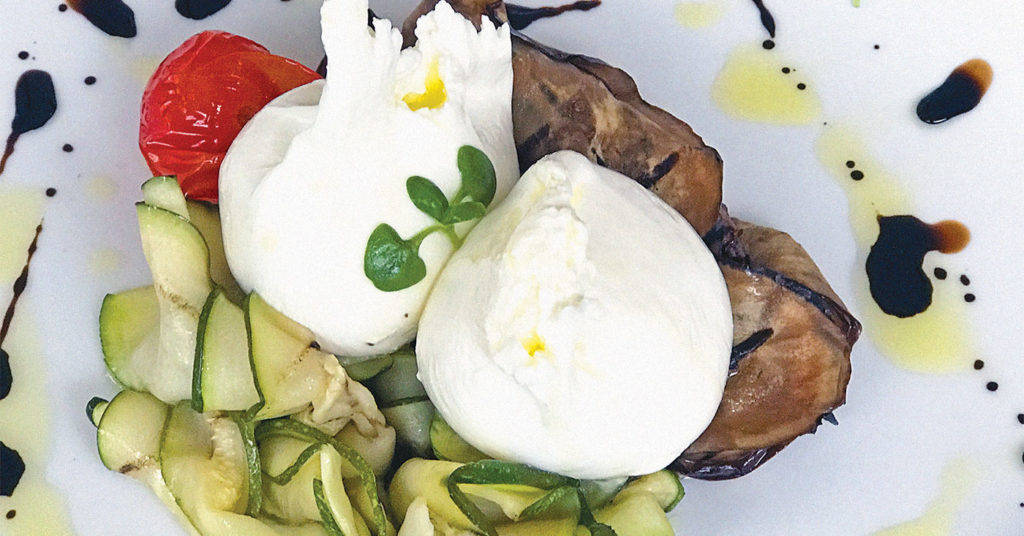 Burrata fresca on a bed of warm, thin sliced veggies at ROCPhoto by Robin Garr

Some of Louisville’s favorite restaurants have their roots in other cities. Consider Selena’s, for instance, which came up from Tampa almost a decade ago. Or Jeff Ruby’s, which added Louisville to its Cincinnati eateries. Or even Vincenzo’s, with its roots in St. Louis.

ROC didn’t leave Gotham without some weeping and gnashing of teeth. The Tribeca Citizen bid the Cadolinis a fond farewell at the end of February, saying, “ROC is one of those restaurants that has always seemed ingrained in this neighborhood.” Until it wasn’t.

Zagat gave it 4.1 out of 5 points for food, saying: “Year after year, this warm TriBeCa standby remains roc-solid for fancy Italian classics courtesy of delightful owners who make you feel at home; a comfortable atmosphere with fantastic outdoor seating distracts from prices that slant expensive.”

That description fits ROC in Louisville well, too. Located in the Highlands Victorian that once housed Butterfly Garden, it has been considerably renovated. Its attractive, spacious off-white rooms are trimmed in blue-gray. A long bar abuts the crowded main floor, which is set with undraped wooden tables and wood-and-metal chairs. A more upscale room is upstairs; we chose the small, glassed-in front porch, which offers a great view of Bardstown Road.

Rocco Cadolini hails from Sorrento — surely you’ve heard the song — and you’ll find a few regional dishes on the menu, such as gnocchi alla sorrentina ($19) with tomato and mozzarella, a caprese salad ($14) and octopus and squid-ink pasta dishes. By and large, though, most dishes reflect the standard Italian canon, such as fettuccine Bolognese ($20) and Tuscany’s classic grilled steak ($38).

A dozen pastas and sandwiches range in price from $14 (for a prosciutto and mozzarella panino) to $30 (for black squid-ink tagliarini with half of a lobster). Just six entrées range from $22 (for chicken breast with porcini) to $38 (for the grilled steak). Eleven salads, soups and appetizers are $7 (for minestrone) to $16 (for grilled octopus with potato cake).

A short, but well chosen, wine list offers a few affordable items and more than a few in the trophy range, while cocktails are $10 to $12.

Our meal began with a generous portion of dense, cakey Italian bread rendered a surprising yellow color by semolina flour, accompanied with a slab of rich European-style butter.

ROC, in contrast with many high-end restaurants, places simple, diner-style salt and pepper shakers on every table, and we made good use of them. While every dish was enjoyable, we were surprised that several dishes needed that extra kick of flavor.

The Stacy salad ($9), for example (named after the co-owner), consisted of a lot of romaine, just two large marinated artichoke hearts and skimpy rations of sliced fennel and cucumber, cherry tomatoes and roasted pepper in a mustard vinaigrette. Extra salt was its friend.

On the other hand, burrata fresca ($15), two succulent little purses of fresh mozzarella filled with shredded mozz’ and heavy cream and placed on paper-thin, marinated warm zucchini and eggplant with a balsamic drizzle, needed no salt at all.

We reached for the shakers again for a mountain of fried calamari ($13), which was all rings, no tentacles, lightly fried and still pale, but grease-free, scattered with chopped herbs but, apparently, not salted at all. The long, slender zucchini strips were fried tempura-style, crisp, delicate and addictive. A decent spicy marinara came in a crock.

A fish entrée, though, Branzino al cartoccio ($30), made us wonder what the chef was thinking. Now, don’t get me wrong: This popular, farmed Mediterranean fish, soft textured and slightly oily, was pleasant enough. It was beautifully presented in a foil wrapper, ceremoniously snipped open at tableside to reveal the large, skin-on fillet topped with julienned carrot, celery, zucchini and onion. But the mild fish lacked flavor. Without salt, pepper, lemon, garlic, butter, oil or something, it was a dish with no flaw, but monk-like abstemiousness.

No salt and pepper was needed for veal scaloppine ($28), two thin, tender boneless pieces pounded flat, but not paper-thin, topped with a blanket of marinara and molten cheese, with garlic-scented spinach on the side.

Dessert, ($9), subtle pistachio panna cotta with a bright magenta pillow of tart raspberry sorbet, might have been the most striking dish of our meal.

ROC is open for dinner daily except Monday. Our dinner for two was $106, plus a $25 tip for our affable server, Bonifacio, aka Flaco.