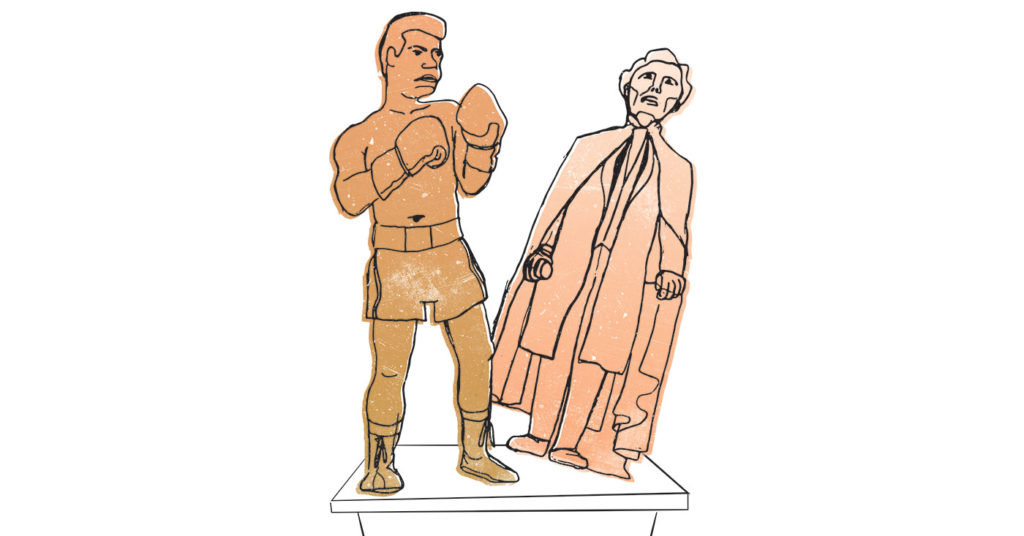 One of the most transcendent joys of my life after politics has been shedding the language of compromised rhetoric and timid talking points. Within a few months of leaving public office, I jumped at the chance to publish progressive pieces with full throated defenses of marriage equality and legalized hemp, both at the time exceedingly unpopular in our Bible Belt Commonwealth.

But none of my post-politics essays have generated so much attention, and provoked so much controversy, than a 2014 Kentucky Sports Radio column in which I called for the removal of Jefferson Davis’ statue from the Capitol Rotunda, and its replacement with a likeness of Muhammad Ali.

To me, it was a no-brainer. Jefferson Davis, the Todd County native who served as president of the Confederate States of America, was a traitor who deserves opprobrium, not exaltation in marble. Davis was a stalwart defender of slavery and the empire-building aspirations of slaveholders; but worse, he has emerged as the very symbol of the most shameful, most disgraceful era in American history. Indeed, that’s precisely why Jim Crow-era politicians enshrined Davis in our state’s version of Statutory Hall. And now, every day, strolling through our Commonwealth’s cathedral, our most important citizens — the officials who set our policies and the schoolchildren who visit — pass by the white statue that continually pours salt into our nation’s deepest wound.

There’s no more appropriate Rotunda replacement for the worst of the 19th century than the Greatest of All Time. Muhammad Ali was a proud product of Louisville. The Champ was a complicated man: In his early career, a time of acrimony and assassination, Ali was a polarizing figure, refusing to serve in Vietnam and asserting his views on race. But the boxer came to represent something much greater than himself, and his long-term positive political and societal impact on the state and the nation is irrefutable. The Supreme Court decision that his draft-dodging prompted served as a milestone affirmation of our nation’s freedoms of religion and speech. By preaching loudly and courageously about the segregation-infected political infrastructure, Ali’s inspiration of young African-Americans, struggling to find a voice in their communities, was unparalleled. As civil rights icon Julian Bond remarked, “It’s hard to imagine that a sports figure could have so much political influence on so many people.”

When my idea was first published, a bilious eruption of online commentary ensued, with hatred directed at me, Ali, and the forces of “political correctness” that dared to bleach out Civil War history. On the positive side, the local media noticed, and hundreds signed a petition directed to state leaders. But it wasn’t until six months later, when tragedy intervened, that the mission gained new energy. In the wake of the Charlestown, South Carolina massacre, in which a Confederate flag-waving murderer united the nation against racism and its emblems, nearly all of Kentucky’s most powerful policy makers — including U.S. Sen. Mitch McConnell, Gov. Matt Bevin, Senate President Robert Stivers and former House Speaker Greg Stumbo — called for the removal of the Davis statue from the Rotunda. A year later, the Champ’s passing prompted another round of honorific speculation (although we learned that Ali’s Muslim faith prohibits his representation in three-dimensional form, so the tribute must come in the firm of a portrait, picture or mural, in lieu of a statue.)

But to date, sadly, there’s been no action. On the question of the Davis removal, the state’s Historic Properties Advisory Commission — which has the legal authority to make these decisions — has refused to budge, and even the Commission’s promises to produce new educational materials to accompany the statute have gone unfulfilled. The loud political clamor post-Charleston has gone radio silent, perhaps in response to a 2015 Bluegrass Poll that revealed 73 percent of Kentuckians preferred Davis to stay where he is.

The intervening two years, however, seem like a political lifetime. Since Election 2016 particularly, a new wave of activism has empowered progressive movements to prod their elected officials to help bend the moral arc of the universe toward justice. Just recently, New Orleans Mayor Mitch Landrieu emerged as a national hero, and even prompted 2020 presidential speculation, for his courageous leadership (and powerful oratory) concomitant with the removal of a Jefferson Davis statue in the heart of Dixie.

So in the end, it’s up to you. Sign this petition at therecoveringpolitician.com/ali. Call your state legislator. Lead a march on the Rotunda. Make your voice heard.

This is much greater than mere symbols in stone. The messages our Capitol sends to the world are a reflection of our public morality. Help our leaders remove a painful embarrassment and replace it with a joyful source of pride. •

Jonathan Miller, the former State Treasurer and Finance Secretary, is the Member in Charge of Frost Brown Todd’s Lexington office.