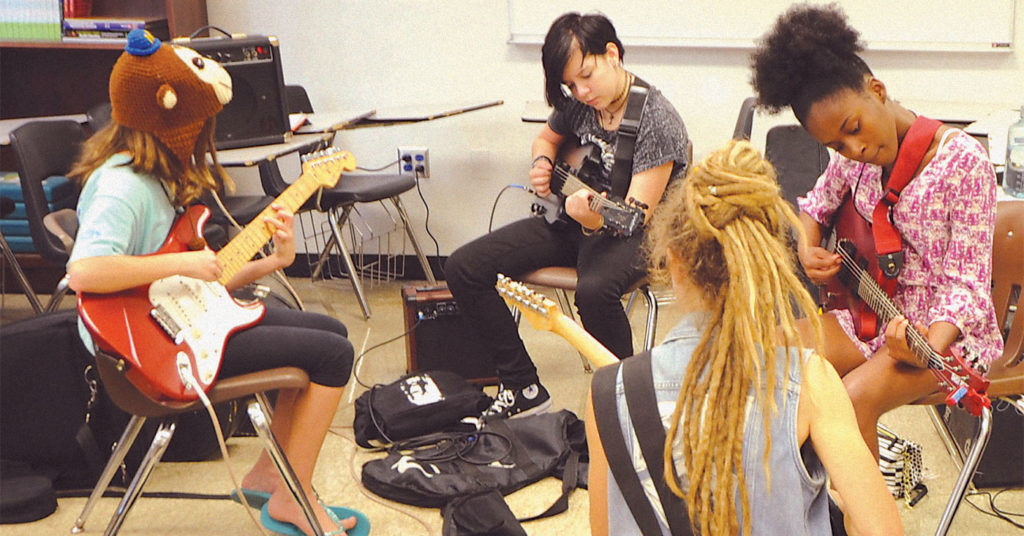 Girls Rock Louisville, which “aims to empower girls and gender non-conforming youth from all backgrounds by exploring music creation in a supportive, inclusive environment,” started as a two-day camp in 2014. It has evolved into a week-long camp that, this year, ends with a concert on Friday, June 16 at Headliners Music Hall, followed by recording time at La La Land studio the next day. We caught up with some of the campers, parents, volunteers and organizers who have been impacted by the camp, to talk about their stories and the effects they have seen Girls Rock Louisville have on their friends, family and themselves.

Deana Nelson
GRL parent
Like most adolescent girls, when my younger daughter Emma hit double digits, her confidence appeared to take a nosedive. The girl who never met a stranger was suddenly shy, sullen and stuck in her room. Too old for traditional summer camps and too young to get a job, she was in that sweet spot that makes preteens bounce off their bedroom walls and makes parents gnash their teeth in frustration. A friend and coworker suggested Girls Rock Louisville, and I immediately signed her up. It seemed like a good fit — Emma has always been musical. She’s been picking apart songs on the radio since she was a toddler (“Is that the guitar or the bass?” “What makes the piano sound so sad?”), and she has taken voice and piano lessons in the past. She currently plays cello for the J. Graham Brown School and the Louisville Youth Orchestra. She decided she wanted to learn to play drums. Not shocking — it’s the instrument in the back. She could participate without calling attention to herself. I dropped her off the first day, hopeful. Emma learned the basics of drumming. She designed her band’s T-shirt. She fell in love with her coaches/teachers/advisers and her bandmates. She learned how to silkscreen. She heard the stories of women who raised hell for a living. She met gender nonconforming teens who were happy in their own skin (or at least seemed to be). She quietly absorbed the experiences of risk taking and brainstorming with a keyboard player named Socks. She learned the fine art of a perfectly-timed drum solo. And she loved every minute of it.

The week ended with a concert and a recording session — each band writes a song, performs it live, then records it in an actual recording studio. When it was all finished, I remember her sliding into the front seat of my car, looking like she was lit from within. “I can’t wait to do that again next year,” she said. Is she still stuck in her room? You bet. Nothing will cure that except time. But she’s in there drawing, writing, playing music and hopefully plotting some serious hell-raising. She has signed up again for this year’s camp. She has signed up for drums again. Yes, she is still in the back. But she’ll be the one on stage making the loudest noise.

Iris Gillespie, 13
GRL camper
When I went to Girls Rock Camp last year, I had a lot of fun. I made new friends and learned new things. One of my favorite times was when one of our band managers made us bracelets. Another great thing about Girls Rock Camp was when I got to write kind words to fellow campers. It was really fun to leave notes of encouragement to my friends, and it made me really happy when people left me notes as well. My favorite class at camp was screen printing. It was so exciting to be able to print my own T-shirt. We learned the whole process, from designing our logo to printing shirts for the concert. Everyday we had band practice. Our band managers taught us about working together and how to write a song. That night, everyone went home and brought back song ideas. I was excited to write the guitar parts. Some days our band would split up, guitars working with drums and everyone else working on song lyrics. I was so proud when our song came together and we got to perform. I even got to write and play my own solo! The day after our concert we got to go to La La Land recording studio, where we took band photos and recorded our song. I couldn’t believe I got to record at an actual studio. It was an experience I will never forget. I am grateful to be a part of Girls Rock Camp again this year and I wish every girl could have the opportunity to be a part of the community that is Girls Rock Camp.

Mary Ralph
GRL organizer
I started playing guitar when I was 14 years old. Like many LGBTQ youth, I struggled a lot throughout my adolescence — with depression, substance abuse and other self-destructive behavior. I was coming out to myself during this time, and I was in Catholic school, trying desperately to force a square peg into a round hole. Music is what got me through this time. I simply cannot imagine the impact Girls Rock Camp would have had on me. My life revolved around playing music and touring, until my band was in a near-fatal van accident in 2009. In the days, months and years of physical and emotional recovery from that, music took a backseat and I started to think of myself as someone who used to play in bands. Organizing and cofounding Girls Rock Louisville has changed my life. It made me a musician again. I have made the most radical, supportive friends. It has given me a way to merge my passion for justice with my love of music. It has helped me realize my skills and find ways to share those with the international community of rock camps at GRCA. It has grounded me in love and trust so that my response to the heartbreaking political climate is to organize with like-minded people and get out of my comfort zone. Most importantly, GRL is a place where I am 100-percent loved, accepted and affirmed, a place where my teenage experience makes me completely, uniquely qualified to support girls and gender non-conforming youth in finding their creative selves and feel whole. It may seem like much has changed, but young women and LGBTQ youth are still disproportionately suffering and they need a place to feel 100-percent loved, accepted, and affirmed.

Bree Cameron
GRL volunteer
Girls Rock Louisville to me has been like finally finding out about the women of the past who started scraping and deconstructing the road for us. Then, becoming a part of a community of women who are working to keep paving it, and all at once, showing the girls stepping onto the road that it’s theirs to own and mold however they want. GRL harnesses the energy from all of these women to make positive change in our world. Campers come not knowing the appropriate way to interact with the volunteers — they see someone older and think rule enforcer. There are no rules at rock camp, and no one is “in charge.” The adults simply facilitate, and there are people of all ages in instructional positions. Campers have complete freedom in how they want to interpret and influence the week, as we know we have much to learn from them too. Along with prejudice of all types, ageism is not present. Camp is a completely safe space. Society teaches girls to be catty, to be in a constant power and attention struggle with each other. Girls Rock Camp challenges that norm by creating a collaborative environment where all have a voice and a support system behind it. We know the route to change is found by listening to each other. This is not just a music summer camp. It is a loud and malleable space that holds love, creation, empowerment, peace and community at the forefront. Camp doesn’t end when the week does. Every time I’m around these women I get the reminder I need that I can take on the world. This is not an exclusive club — the community keeps growing, showing me that this is a space that is needed. Come be a part of the revolution.

Joni Tamalonis
GRL volunteer and parent
The Girls Rock Louisville camp experience is a remarkable experience for both volunteers and campers. While the most evident outcome for the youth is the formation of bands that work cooperatively and play in front of an audience in a very short amount of time, the deeper and perhaps more meaningful outcome is a sense of empowerment and community. The camp experience is both communal and person-centered and really emphasizes how strong, unique and valuable each camper is. It’s easy to see that the girls absorb that message. The participants gain confidence and a stronger positive sense of self and that’s pretty inspiring.

Jordan Martin
GRL volunteer and organizer
The point of Girls Rock Louisville is to create a space where campers don’t have to be defined by the world’s idea of what it means to be a girl. What comes to mind when you think of “girl”? Pink dresses, makeup, kittens or maybe shyness. While all of these things are wonderful, to call them the rule is limiting to the scope of what it means to be human. There is no one way to be. When I was 19, I went to a male friend of mine for advice: “I feel like if I’m too girly, no one will take me seriously. But if I’m not girly enough, people won’t like me.” He didn’t understand, and I realized that this contradiction was core to my youth, and I’d never been able to put a finger on it. To be a girl is dangerous, but to abandon girlhood when others expect it of you is also dangerous. At Girls Rock Louisville, the aim is to invite campers into a space where they can be free of such limitations. They are encouraged to explore past the ‘rules’ of girlhood, and define it for themselves. They can be loud or quiet — their voices count either way. They can mess up. The goal is for campers to start understanding the facets of their identities that influence their definitions of self and the music that they produce, while understanding and respecting that others have different facets that inform their lives and creativity.

October 2014: Carrie Neumayer and Stephanie Gary founded the Louisville Outskirts Festival’s Rockshops for Girls. 40 campers and 20 volunteers participated and a showcase concert was held at Dreamland.

July 2016: 39 campers participated in an six-day program held at Central High School that included workshops geared towards building self-esteem, self-expression and social justice. 39 campers formed seven bands and wrote songs that they performed at a concert showcase, and then recorded their original songs at La La Land recording studio.

Winter of 2016: 250 CDs comprised of the songs recorded at La La Land were released. A release party was held at Guestroom Records in December of 2016. Girls Rock Louisville incorporated as a 501 nonprofit organization and developed a strategic plan, working toward building year-long programming, multiple weeks of camps, an adult music program, and establishing a goal of eventually owning their own space.

Spring 2017: 10 students at Western Middle School participated in daily after-school instrument instruction sessions in guitar, bass, drums, keyboards, or vocals based on interest and skill level. The students formed two bands and wrote original songs that they performed at a concert showcase.

June 2017: 42 total campers, from 25 zip codes, between the ages of 10-18, and 84 volunteers, will participate in the 2017 Girls Rock Louisville Camp, which ends with a Camper Showcase & Afterparty at Headliners on Friday, June 16.