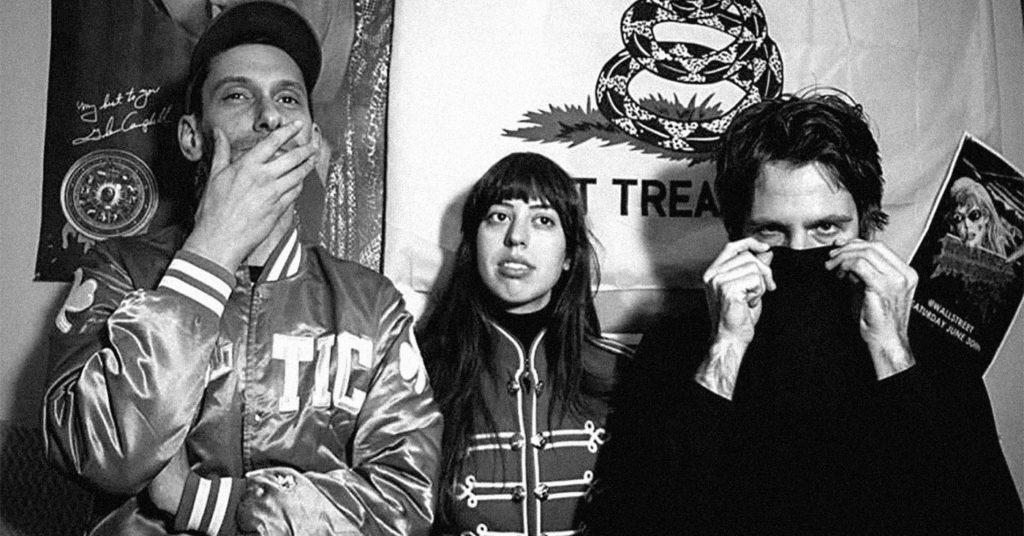 After growing up on a farm, the child of German immigrants, Mom and Dad guitarist Zach Prosser gravitated toward the punk and hardcore community, spending his formative teen years crashing couches and playing basement gigs, picking up on the ideological conceits of DIY culture along the way.

“As a young kid, I’ll never forget seeing some of the first shows that I was playing — there was a sense of community and free expression, and just energy,” he said. “People have so much energy in them that gets kind of squelched. But your energy can be used in good ways — a good way to do that is acceptance-based community shows.”

In college, he met drummer Shane Toombs — who also is a poet — and bassist/vocalist Leah Miller — who also is a playwright — and the trio of creatives were off and running as Mom and Dad, a band that balances a variety of sonic elements in a cohesive manner. You might pick up notes of Burger Records-style garage rock, power pop or even elements of ambient music, but it all makes sense in the end.

“If I was talking to someone like my very awesome Catholic grandmother, who is a saint, I would say that we are an art band who plays energetic punk shows,” Prosser said. “It’s more of an art-based thing than a music business thing. We are obsessed with music and we push ourselves to be better musicians. I feel lucky to be in a very fluid artistic environment.”

He’s found good fortune living in Nashville, a city with a burgeoning indie scene catering to a range of music, from garage rock to industrial and many other points on the genre map. While the city’s musical infrastructure was built on a foundation largely of country, variety is part and parcel to the culture of contemporary Nashville. Mom and Dad’s newest record, I Am Therefore, I Is, is guitar-centric with prog and punk elements balanced in. It’s bouncy and bold, a fun romp with earnest themes, unflinchingly catchy through and through. Although it was just released this past March, Prosser and crew are already onto the next record.

“I Am Therefore, I Is is really a very specific kind of record for me,” Prosser said. “It’s a very heavy guitar album. A lot of our music goes into avant-garde noise and the guitar is just a texture. The EP that came before, which is called Which??, is more of a kraut rock record, and our first record, Cave Art, is like Motorhead playing The Kinks. I Am Therefore, I Is is a very tender record. The next record is very dark. We were all very affected by the election and culture dismay and malaise. It’s going to be really representative of that. There is a lot of stuff going on with cultural militancy and isolation and it’s funneling in our brains, and it’ll really come out on the next record. It’s going to be an organic response to our positions on modern culture.”

Mom and Dad want you to feel at home, and Prosser makes no bones about it. He wants his art to touch on the traditions of family and community that he came up with both on the farm and in the punk scene. He wants that to shine through on their records, and at their concerts.

“There’s been a lot of push back against PC culture,” Prosser said. “I don’t want to say we’re a PC band, but I’m going to do whatever it takes to treat you with respect and kindness. Growing up in the punk mindset, there is a lot of machismo, but there is a lot of disdain for homophobia, et cetera. We don’t want to be associated with anything sexist, transphobic or anything else.”