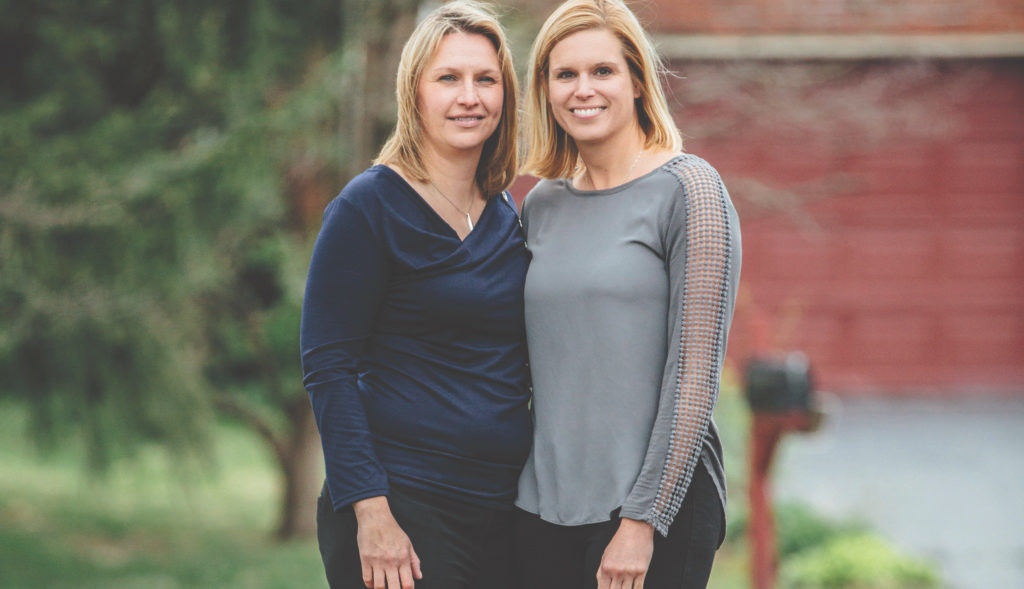 Sometimes, planning a wedding can feel exhausting – but that’s not the case for Angie Merrick and Rachel Miles. Their May wedding will be boldly simple and classy, nuanced by a few elegant details to fit the couple’s personalities.

Their story is short and sweet. “We actually met online,” says Miles. “We had a lot in common; we both had college degrees, we both had kids, we liked good food. And we were looking for the same thing.” As to when they met in person for the first time, “I was feeling pretty good about it, and then I saw her and I started to get really nervous,” recalls Miles with a laugh. “I thought, ‘Wow, this could really go someplace.’”

“Everything just seemed right,” Merrick agrees. “We met to make sure, and it fell into place.” It turned out that they’d in fact crossed paths in the past – even played softball together years ago.

When the subject of marriage came up, they didn’t feel the need for a huge proposal. In a conversation they describe as mutual, the pair decided to take the next step. “It wasn’t so formal. We knew we were in love with each other really quickly,” Merrick explains. “We said, ‘Why are we waiting so long when we know how we feel?’”

The wedding will take place on May 22, 2017, in Lyndon’s Romero Park. “There’s a gazebo,” Miles details, “and we’ll have a judge, each of our two best friends, our two kids and a dog. We’re just keeping it simple.” For colors, they chose light blue and a silvery gray, which will be represented on the brides. “We’re both in dresses,” Miles says. “I’m wearing light blue and Angie is in light gray, in the same style but different colors. It’s a simple, classy dress we both like.”

“We discussed it – we both wanted it to be very simple, not a lot of frills, not about all the traditional stuff,” Merrick says.

“We’re not real traditional, if you haven’t noticed,” Miles adds playfully. “We kind of go with what we like.”

However, they’ve spent some extra time on two important details. “The rings are probably my favorite part of all this. Ashley [Davis] was very helpful,” Miles says, referring to the couple’s rings from Davis Jewelers. The two will be wearing platinum rings, custom-designed in a process led by Ashley Davis herself.

Merrick remembers going into Davis Jewelers to look for rings. “We were looking at images online; we had a very helpful gentlemen assisting us,” she says. “Meanwhile, Ashley was sitting at her computer, designing as she was listening.” In just a few minutes, Davis had a design concept that both Merrick and Miles loved. “It was perfect,” Merrick says. “We have identical rings, but one is platinum with a sand blasted finish and one is a high polish platinum.”

“I wanted a plain band, but Angie wanted a diamond,” Miles recounts. In the end, they chose a sleek silver design with a stone set low into the band. “The rings are identical but with different finishes – we’re the exact same size, so it made sense to make the finish different. We’ll know whose is whose,” Miles explains. “Ashley is wonderful. We didn’t have to make any adjustments; they were perfect when they arrived.”

As both an artist and vice president of Davis Jewelers, Ashley Davis was the ideal person to consult. “Jewelry, as a whole, is a sentimental item – every piece has a story,” Davis says. “When you custom-make that piece, it adds to the story. I feel that sometimes people are nervous about walking into a jewelry store because they don’t know where to begin. We really try to help aid in that discovery. I want it to be fun. I love when they get that big smile on their face when they enjoy it.”

She knows that the ability to design rings in an affordable way is a process in which many couples will be interested. “A jeweler used to have to carve a design from scratch,” Davis relates. ‘The new way is to make it on the computer – it’s more cost-effective. The industry calls it a CAD program, for computer-aided design. It’s just like interior design, but jewelry-specific.”

With a background in studio art, Davis relishes the opportunity to help couples create the perfect piece. “It was so easy to make their dream a reality with literally the click of a button,” Davis emphasizes.

“Tailoring something for the LGBTQ community is unique and special,” she continues. “Love is love. It may look different to other people, but it’s all the same to me. We want to be part of it, no matter what the capacity.”

Merrick and Miles, meanwhile, are immensely satisfied with their beautiful custom rings and looking forward to their summer wedding. With modest elements accented with chic details – and lots of love – they’re sure to have the perfect happily ever after.