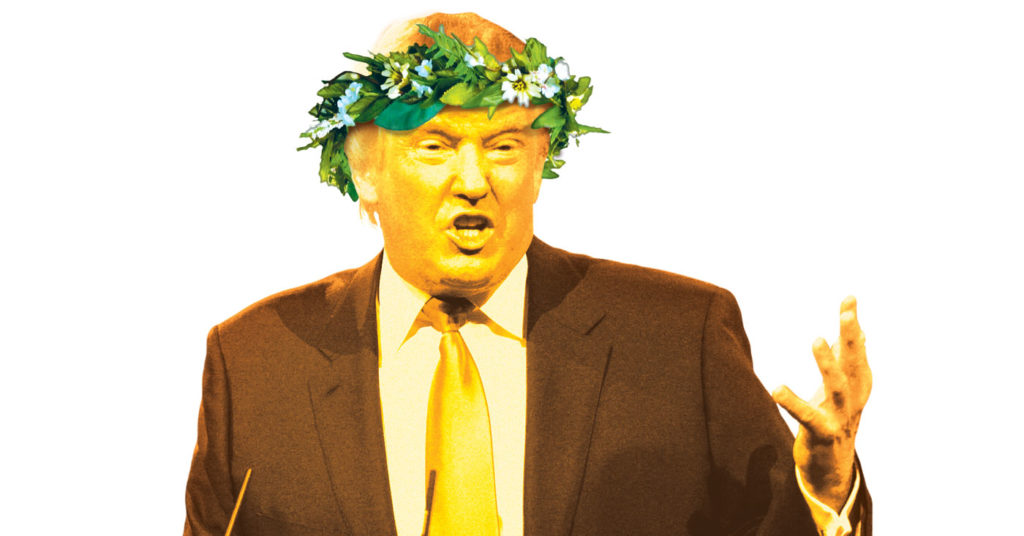 In the fall of 1937, Orson Welles selected Shakespeare’s “Julius Caesar” as the first production at this newly-founded Mercury Theater. He subtitled the production, “Death of a Dictator,” and dressed his cast the clothes and uniforms of Fascist Italy.

New York Times theater critic Brooks Atkinson noted that the manner and appearance of the Caesar in the production was almost an exact match for Italian leader Benito Mussolini. But then, Atkinson went on to note that the obvious political intent of the production was thwarted by the logic of Shakespeare’s script: “Caesar is assassinated because he is personally ambitious; that much seems reasonable,” he wrote. “But presently it appears that Caesar is a benevolent dictator and that his assassins have done the state a grievous wrong.” Atkinson then went on — whimsically, I think — to suggest that, “perhaps Shakespeare was a fascist without knowing it.”

The lapse in logic did not deter audiences. Spurred by the politics of the time, the production was an enormous success.

The following spring, shortly after Nazi Germany took over Austria, a Viennese “Caesar” met a different fate. Joseph Goebbels, Hitler’s minister of propaganda, attended on opening night — and it seems the production was shuttered forthwith.

Since the ‘30s, productions have portrayed Caesar as an African or South American dictator. During the Obama administration, at least once Caesar was played by a lanky African-American man — and in another production the role was played by a woman wearing a pants suit.

Two weeks ago, New York City’s Public Theater opened a “Caesar” under the direction of Oskar Eustis. Here, Caesar’s look and manner resemble those of President Trump (to reinforce the point, his wife speaks with a Slovenian accent — and his bathing fixtures include a golden tub).

This production incited a furious response on social media and cable news. Two major funders (Bank of America and Delta Airlines) pulled their support. Another, American Express, distanced itself. The National Endowment for the Arts quickly announced that none of its funding had supported production. Multiple performances have been disrupted by protesters rushing the stage. And the Boston Globe reports that a few other Shakespeare-related companies around the country have received abusive phone calls and emails apparently as collateral responses.

This summer’s Kentucky Shakespeare Festival in Central Park features “Julius Caesar” as its third production of the season, opening June 29, and is in the second week of Shakespeare’s “Richard the Second,” another play that has a history of controversy and involves a revolt against an unpopular ruler.

I asked three artistic leaders at Kentucky Shakespeare for their thoughts on the recent events.

Matt Wallace, the company’s producing artistic director, has been involved with three different productions of “Caesar” over the past year. He directed a Shakespeare Behind Bars production at Luther Luckett Correctional Complex. He directed an educational outreach production that performed this spring at more than 50 schools and 23 parks during the spring. And he’s directing the Central Park production.

Wallace said that Kentucky Shakespeare’s production had been planned years ago, as part of a four-year cycle that matches up with area school curricula and cycles through “Hamlet,” “Macbeth” and “Romeo and Juliet.” The school production, he noted, featured African-American actors in the roles of Caesar and Brutus. Staged in modern dress, it depicted the assassination scene at a press conference.

For the school audience, said Wallace, “We wanted to make not a political statement, but to create familiar contemporary connections that would help students explore questions of human nature.”

For the summer production, he’s using classic Roman garb. “There hasn’t been a traditional dress production at the Park in many years,” Wallace said. “I’ve never seen one, and I thought it would be interesting. From a dramatic standpoint, the historical distance frees audiences to make their own contemporary connections. And my goal as a director is always to present it so that we and our audience together can discover the truth that it’s in it. This is a tragedy where everyone’s faults are exposed and there are no real heroes. So what we try to do is make it possible for the audience to meet the story halfway on their own terms.”

Greg Maupin is dramaturg for this summer’s productions. He also plays multiple roles during the seasons (including one of the assassins in “Caesar”). Noting that Caesar dies early in Act 3, he observed that from then on, “Nothing goes well for any of the conspirators. In fact, things go badly for them, for Rome, and for pretty much everyone. It’s hard to interpret the play as endorsing the assassins.”

When I asked whether it was possible that the play had — in my word — “pandered” to the audience, Maupin pointed out that it would be unreasonable for him to judge, since he hadn’t seen the play. But in general, he commented, “Audiences love to do the math. There’s nothing worse than spoon-feeding people. But if you put the bowl and the spoon on the table, a wonderful thing happens. The audience eventually will pick up the spoon and go, ‘Ah! This is just like something I’ve experienced in the world!’ They’ll make their own judgment about what’s happening, and those are the most exciting moments in theater.”

Amy Attaway, the company’s associate artistic director and director of “Richard the Second,” also declined to judge a production she hadn’t seen. But as an artistic judgment, she said, “I think didactic theater that claims, ‘my opinion is right, and I will tell you what to think,’ is self-aggrandizing. I don’t think it’s effective. If I were to try to make ‘Richard’ an anti-Obama or anti-Trump play, it wouldn’t work. You don’t change minds that way. You change minds by opening people to different possibilities, by giving people a chance to think about their experience or the world or politics perhaps in a way they hadn’t before. Maybe it surprises them and shifts their thinking.”

Maupin reinforced that idea. In Shakespeare, he said, “you’re hard-pressed to find a true villain for whom you can at no moment have any sympathy. You don’t get this feeling of evil characters twirling their mustaches and trying to do evil. I suppose there are parts you can play with an elbow nudge and a wink-wink. But Shakespeare gives people the benefit of the doubt. There’s almost always a reason why people are doing what they’re doing. They believe in the principles of their country, or family loyalty, or land or whatever, and Shakespeare doesn’t make it easy to avoid seeing that. To me, that feels like a useful injection into modern political discourse. If we could come to believe good-heartedly that the other side believes the things they say and the ways they want to achieve things, maybe we could start to talk about where do we go from here.”