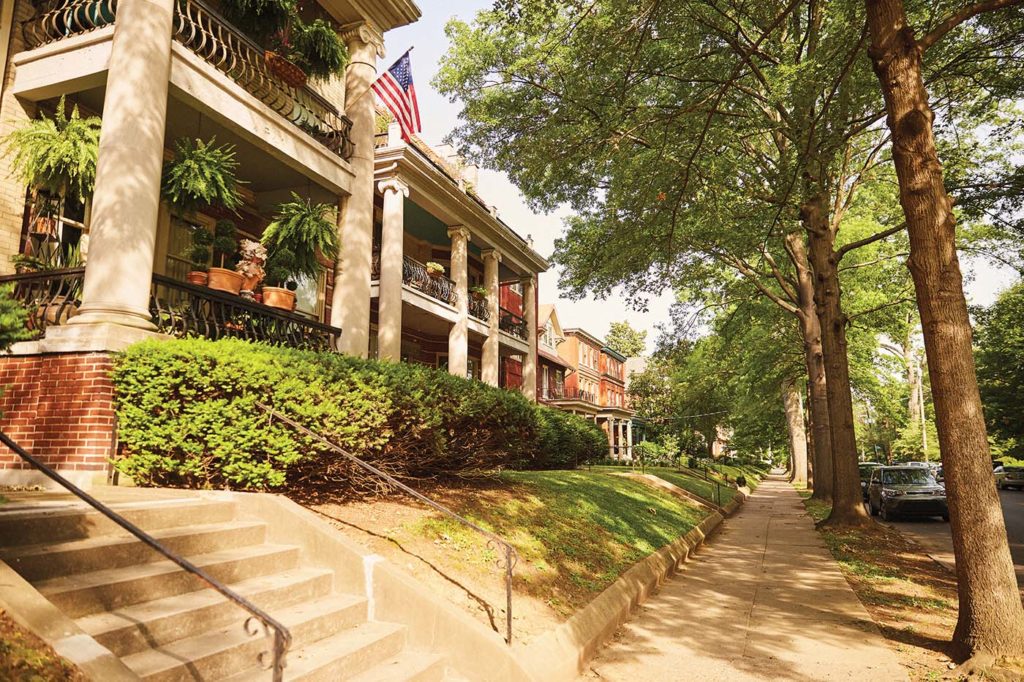 Like many major metropolises, Louisville is an outlier on the broader landscape. An enigma on the Ohio River, its unique crossroad of Northern, Southern and Midwestern sensibilities nurtures a county-shaped speckle of liberal majority in the red Bluegrass State. Arranged like puzzle pieces within are the numerous neighborhoods we all know, each with its own reputation, willful or otherwise. To an outsider, a select handful of these neighborhoods are learned first – the most well known, the most visited. Enter, the Highlands.

So named as it rests above the south and middle forks of Beargrass Creek, the Highlands has developed over nearly 200 years to the reputation it keeps today: an open-minded community and a crown jewel of hospitality. Very few other parts of the city beckon visitors quite like this three-mile stretch of road and its residential tributaries. The density of dining options, eclectic nightlife and distinctive businesses are a draw, to be certain, but there’s something less definable to the allure as well. The Highlands is a feeling, a haven, a utopia despite the aged buildings and jagged sidewalks.

As this neighborhood is so deeply rooted in the uniqueness of the human experience, it’s evolved over the years to become an unofficial epicenter for Louisville’s LGBTQ community. What might be less welcomed, (and perhaps less out) in the concentric circles radiating toward the city limits is instead supported, encouraged, displayed. For those lucky enough to call the Highlands their home, the benefits of residing in an area where they can live and play are innumerable.

Indeed, entertainment abounds. Visitors can choose from not only multiple LGBTQ-centric establishments but also an unparalleled selection of bars in general, as well as live music venues, an indie movie theater and a strong rotation of yearly festivals. Bryan notes his (ironically) small but booming bar enjoyed overnight success in this competitive arena.

“I thought there was a lot of demand for an LGBTQ establishment in the Highlands,” he contends. “It just made sense. That first year, we were so busy. It felt like throwing a party every night – stressful but awesome at the same time.”

It seems indicative of the neighborhood that Big Bar continues to prosper after five years in such close proximity to like-minded establishments, including Chill Bar and Nowhere Bar only a block or so away and PLAY Louisville not far outside the Highlands limits. Then again, why wouldn’t it? Few instincts are as universal as the desire to gather and interact. More options means we feel more comfortable in our selection, and Louisvillians from throughout the city are willing to migrate to Bardstown Road.

“I’ve thought about what it would be like to open other places in other parts of town,” Bryan says, “and I think it would be more of a challenge business-wise. We benefit from a great neighborhood where a lot of people want to live.”

Paula Head and Deb Wallace settled in the Highlands about 30 years ago. Each having purchased homes there in the late 1980s and early ’90s, they found a love for the area even before they found one another. Though they’ve been together nearly two decades now, they’ve never once considered abandoning this idyllic part of town, opting instead to puddle-jump between houses and fix them up along the way.

“I moved to the Highlands in 1988 and bought my first house in 1992,” Head recounts. “Deb bought her first house on Rosewood in 1985, so it’s been a long time. We’ve been together almost 20 years and in that time, we’ve lived on Speed Avenue, Boulevard Napoleon, Rutherford Wynd, and now we’re over on Windsor Place, so we’ve stayed in a several-mile radius.”

After the Highlands Commerce Guild was created in 1977 to address concerns of decline in the quality of the area, the Bardstown Road corridor rebounded commercially in the ’80s as local businesses filled the vacant storefronts adjacent to elegant residential streets. Young professionals began filling those avenues, drawn to amenities like Cherokee Park and a flurry of dining options. Wallace, a staff member at the University of Louisville Dental School, was no exception, and she elaborates on the undertow of LGBTQ inclusiveness even then.

“When I bought my first house, I hadn’t been out for very long,” she says. “They were just beginning the gentrification of the Highlands; people were buying houses and fixing them up. Even at that time, most of the gay people that I met were living in the Highlands or Crescent Hill or Clifton. I was just drawn to what I perceived as a more welcoming community. It’s a great area to live in, for obvious reasons. You have the bars, the restaurants, the parks. … Even at that time in the mid-80s, there was a pretty significant [LGBTQ] community affiliation. There were three gay couples on the street I moved to.”

Both Wallace and Head stress the significance of their supportive neighbors, citing instant welcome after moving between homes. “I will say for me, in the early years of coming out as a gay person, you’re always concerned if your neighbors will be ‘okay’ with it or if you have to worry,” Head says. “I know since Deb and I have been together, our neighbors have all been fantastic and very supportive.”

With such a high population density, Highlands residency almost demands a certain level of empathy. Neighbors are often much closer together than they might be in suburban alternatives, fostering tolerance if not friendship.

“No one’s ever even blinked an eye,” she continues. “A lot of those issues are internal with us, or were internal back in the day. You don’t have to worry here that your house is going to be egged or damaged or vandalized. I’ve had friends in other suburban areas where one person’s garage was spray-painted with a derogatory word. Another couple that we’ve known for a long time got a letter in the mail that told them they needed to get the hell out of the neighborhood. These things still happen now.”

Despite the current political climate revealing just how much bigotry seeps from the woodwork of the American interior, Head happily reports that the Highlands’ being largely free of discrimination means couples can feel free to be affectionate both in their homes and in public spaces. “Deb and I have talked about it – that’s not something that people of our generation would have been comfortable doing. You would have feared for your own safety. It just wouldn’t have been smart. But now I see young gay and lesbian couples up and down the road, holding hands.”

In nearly 30 years, Head has suffered one case of prejudice in the Highlands: an isolated incident in which several teenagers shouted a slur to her from an open car window long ago. She and Wallace believe that such intolerances are not representative of area residents but rather the behavior of the odd visitor.

“It’s not typical of people who live in this area,” Wallace insists. “I think in this neighborhood at least, and probably in Crescent Hill and Clifton, we’re somewhat insulated. You just don’t hear about those hateful things happening very often. Or maybe we’ve just been lucky.”

Though the Highlands is something of a city sanctuary, it’s still only a modest harbor for anyone outside popular society’s standard formula. When considering generally LGBTQ-friendly cities, one likely defers to the big names: New York, Chicago, San Francisco. The Kentucky LGBTQ Heritage Project, a statewide historical narrative principally authored by UofL Associate Professor Dr. Catherine Fosl, remarks that even the most urban sections of Kentucky’s largest cities pale in comparison to the bigger fish:

“Kentucky has been and remains a rural state, and even its urban centers of Louisville and Lexington have more rural elements than many residents would like to admit, especially if New York, Los Angeles, or even Atlanta are the standards. Both Louisville and Lexington often demonstrate a clear sense of LGBTQ (and wider) identity formed, in part, by strong assertions of not being like the rest of Kentucky (i.e., rural) and by not being like…each other.”

Given the need for much more than a single allied corridor, the Highlands looms in a peculiar state of deserving celebration, for certain, but also criticism. Is it enough to have one great neighborhood for the LGBTQ community? Surely not, especially when it’s not an easy part of town to break into. The average listing price for a Highlands residence, according to Trulia, currently averages around $290,000, with prices topping out in Cherokee Gardens not far below $1 million and hitting their lowest in bordering Irish Hill at approximately $151,000. Because of property ages, an inexpensive home will likely require updates or extensive maintenance, driving up costs well beyond selling price.

As millennials famously struggle to reconcile college debt, underemployment and lack of credit, a manageable family home slips further out of reach for much of this younger generation. Bryan, once a Highlands resident, moved to the Germantown border nearby when he needed more space.

“I lived on the third floor of a walk-up condo building on Cherokee Road and it just became too small. Two years ago, I bought a small shotgun house on the border of Germantown and the Highlands, so I’m in Paristown Pointe. I loved living [in the Highlands], and I miss it.”

Any number of current or former Highlands-dwellers are likely to tout its charms, but the struggle of purchasing and maintaining a long-term residence is challenging at best. For Head and Wallace, the increase in property values has been beneficial to them as they’ve purchased, renovated and sold several homes over the years, but they too understand the need for more affordable housing if the lifestyle diversity they cherish is to survive.

“It’s been wonderful that property values have gone up and up, but that also limits younger folks moving into the area because they simply can’t afford to buy anything,” Wallace contends. “It’s a catch-22 that kind of limits the diversity of the area when you have to be at a certain level socioeconomically before you can buy a house here.”

To address the issue, she and Head attend neighborhood association meetings to advocate for a better range of cost. “One of the discussions was about prioritizing things for the Tyler Park neighborhood,” Head says. “We voted on which of the priority issues we wanted to be looked at closer, and one of them was affordable housing. We want it to be multileveled with young people and elderly people on a fixed income. You want to keep it economically diverse in addition to the different types of people. It’s important to get a voice and input in shaping what we want to maintain and mold differently.”

Head and Wallace’s involvement speaks to the remarkability of the Highlands’ consistent pursuit of further inclusiveness. The best parts remain the same, while efforts at change strive toward making it a place more people can enjoy. “It goes beyond being gay and lesbian in this neighborhood,” Head affirms. “It’s welcoming to mostly anyone. I think people who are different, in whatever way you define ‘different,’ feel comfortable here.”

And so the Highlands keeps its trademark reputation of old world beauty with modern attitude, like a carefully-planned tattoo on the cityscape, there to stay.