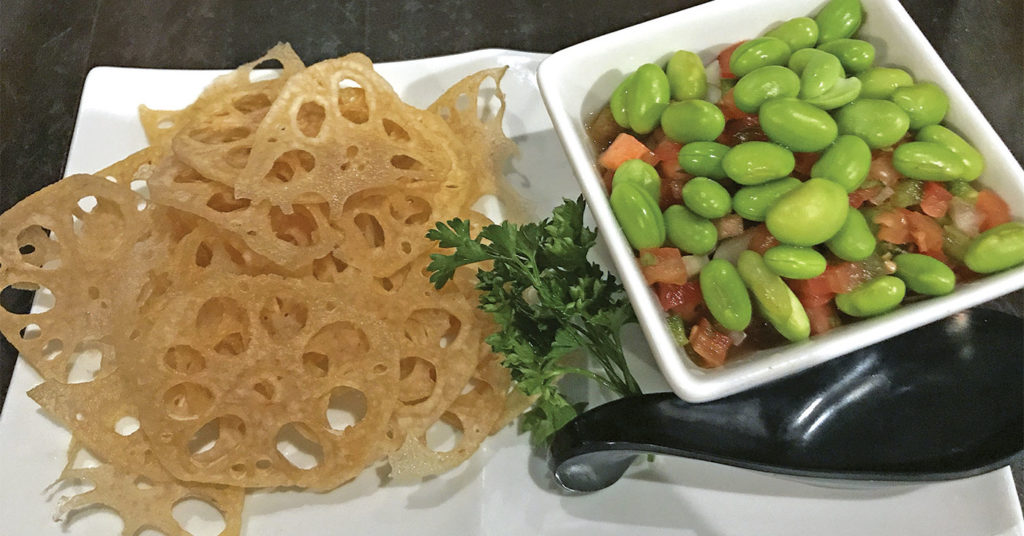 Lotus chips and edamame salsa, a fun starter at hiko-A-monPhoto by Robin Garr

When I go to a Japanese restaurant, I generally love to pull right up to the sushi bar. I can hardly imagine a more immersive entry into the world of Japanese cuisine than sitting right across the table from the sushi chefs, with the striking colors of beautiful, fresh fish and other edible delights lined up in perfect rows before you.

You can ponder the options and point to your favorites, or invite the chef to offer a suggestion, or clue you in to whatever is freshest and best on this day. Or, if you’re bold, utter the magic word “omekase” (which is pronounced “oh-meh-kah-say” and means, basically, “feed me, chef”), and sit back and wait for the surprises to emerge. This does require a touch of bravery, though, because if you didn’t disclose preferences, or even food taboos, you may wish you hadn’t said that word as you gaze down on a jiggly wad of monkfish liver or whatnot.

Anyway, that’s what I usually do.

But when we found our way to hiko-A-mon in Westport Village the other night, I embarked on a different journey. Sure, hiko-A-mon has splendid sushi, featuring a couple of dozen bite-size nigiri sushi on rice balls, and maybe four dozen fancy maki rolls. Named after its Kyoto-born Chef Hiko, it’s widely regarded as one of the city’s finest sushi joints, perhaps No. 1 on any given day.

But I’ve been there and done that. So this time, we elected a different approach. Just as we had often done on a memorable visit to Japan some years back, we would graze through the menu, enjoying an array of apps, small plates and noodle dishes, and enjoying all the diversity of a sushi dinner while venturing into a different culinary range.

We took our seats at one of the black-topped tables in the attractive, dimly-lighted room with a slightly unnerving display of live fish — not, I hope, sushi-to-be — undulating gently in a large tank off to one side. Walls are painted bold, solid colors, vermilion behind the sushi bar, gray-green along the side of the room, with odd but attractive decor that surprisingly resembled metal bundt pans and muffin tins. (hiko-A-mon also has a downtown location: 416 W. Muhammad Ali Blvd., ​625-3090.)

Beyond the extensive sushi lists, the dinner menu takes some time to peruse with its five pages of tightly-packed, small print in English and Japanese. About two dozen entrées are limited to the back pages, and they’re not budget fare, ranging from a couple of $14.95 vegetarian entrées up to $35 (for rack of lamb) or market price that may reach $45 for a fillet and lobster tail surf and turf.

We promptly turned back to the first three menu pages and found to our delight that they offer an intriguing array of some 60 options, many of them new to our jaded palates, most priced in the lower teens or even single digits, but still generously portioned.

hiko-A-mon’s full bar offers well-chosen selections of sake and wine, with a liquor list including some 30 bourbons. I ventured into the mysterious (to me) world of Japanese sake to enjoy a small bottle of milky-white Chochikubai “Nigori” unfiltered sake ($13). Served cold in small shot glasses, it’s worth the discovery.

Lotus chips with edamame salsa ($5.95) make a tongue-in-cheek spin on chips and salsa, and just as appetizing, paper-thin, crisp rounds of fried lotus root and a spicy tomato salsa filled with edamame beans.

Gyoza ($4.95) are the Japanese equivalent of potstickers. Six wonton-style half-moons were chock-full of ground pork and chopped napa cabbage, pan-fried crunchy and brown on one side. A tangy soy-based dipping sauce was delicious.

Seaweed salad ($3.95) was chopped and served on romaine leaves. It left no doubt of its origin with a distinct scent of the sea. A scattering of white sesame seeds added crunch.

Oshinko ($3.95), four kinds of Japanese pickles, were tangy and crisp: Fresh pickled ginger, tiny cucumber pickles and two others that might have been mushrooms, but eluded my efforts at getting a translation.

Buta-Kakuni ($7.95) means pork belly, and it was a generous portion, more than a half-pound of large cubes of boneless Berkshire pork rippled with veins of pure fat. They were served in a rich, brown marinade that infused the meat and fat with sweet soy flavor. It was garnished with two halves of a hard-boiled egg, and plenty of sliced green onion.

Mackerel pike (sanma, $4.95), chosen from a short list of grilled-fish appetizers, was a long, skinny whole fish with many needle-thin bones. It was perfectly fresh; oily and strong, just as expected.

Zaru-soba ($13.95) is a cold noodle dish, traditionally served in summer. A generous portion of brown, squarish buckwheat noodles is served on a wooden mat perched over a small bowl. Stir in chopped scallions, nori seaweed and wasabi and pour cold, tangy ponzu sauce over the deliciously-earthy noodles and enjoy.