It’s a gorgeous Saturday here in Oakdale, and I’m sitting on my porch with some coffee. The Jehovah’s Witnesses are out this morning. It’s a pleasant day for testifying, and they’re making the most of it. I find their presence calming. The ladies’ perfume on the breeze, their good intentions and just the sight of folks walking through the neighborhood puts me in a peaceful mood. I don’t agree with a lick of what they believe theologically, but I’m thankful they’re here.

I myself am a Quaker. Quaker spirituality is difficult to summarize, but most Quakers center worship on the practice of gathering together and silently waiting to receive a divine message. I’d put my personal response rate around 15 percent. About one in seven times I receive a message that feels spiritually meaningful. The rest of the time, it’s chicken recipes or earworms that do nothing to guide me in better living, one of the central tenets of Quakerism — that we are called to “walk cheerfully over the Earth, answering that of God in everyone.”

Answering that of god in everyone is an impossible task I will spend my entire life failing at, so I’ve been focusing more on the walking cheerfully over the Earth part, starting with my neighborhood.

Oakdale sits just south of Churchill Downs and just north of the more bourgie Beechmont. It’s where Derby-revelers pay to park and then wander around drunk with large amounts of cash. Ours is one of the neighborhoods Gov. Matt Bevin included in his violence prevention plan. A plan, which was, in essence: walk through your neighborhoods and pray.

Prayer isn’t really my thing, but I do regularly walk through my neighborhood, paying it some attention and affection, and looking for ways I can positively contribute. I notice the broken sidewalks and sometimes dispose of a needle or two. (Note to Matt Bevin: It is not advisable to kneel on street corners.) I say hello to everyone I meet with a sincere friendliness and reverence I believe we’re all due. And sometimes I am called, by god or self-preservation, to prevent some violence.

It’s about a week after the Jehovah’s Witnesses were out spreading their good vibes, and I’m walking to a friend’s house for some evening porch sitting. There’s a woman on the opposite side of the street tracking me, and I can tell she’s going to start some shit. She’s known around here, and her behavior has been escalating. The latest incident involved her holding a live rat by the tail and waving it at some little kids who had wandered away from a party. Maybe she was threatening them; maybe she was looking out and doing what she could to encourage them to return to their parents. Lord knows.

I walk past her and involuntarily jerk when I hear her run across the street. I look back. She’s following me, so I turn around to address her.

“You startled me! You doing all right?”

She tells me she’s homicidal, and I notice that she’s carrying a T-handle socket wrench. Huh, I think. I’m about to be the victim of a random act of violence. I say the first thing that pops into my head.

She rushes toward me a little more, and I note that homegirl does not look well. She’s gaunt and sunburned and seems afraid of her own actions. I have no doubt I could take her in a fight, but I don’t want to get hit or spattered with any sort of bodily fluid, and I really don’t want to start hitting and not be able to stop.

I jump back and square up. “You better not be,” I say and the adrenaline makes it sound convincing, “or this is gonna be a real bad day.”

She looks me up and down, in my cutoffs and dippy shoes and stained T-shirt with no bra. “Are you a cop?”

And now I’m just pissed. “You need to keep moving!”

She scurries off, yelling that she’s sorry. She thought I was a cop, and she’s having a bad life, and, oh, if I snitch — I’m dead. There’s no point in snitching. I watch to make sure she doesn’t accost anyone else on her way down the block, and then I make my way to my friend’s porch to enjoy some peach crumble.

I don’t know if that was the right way to handle it. That no one got wrenched indicates something went right, and I did later reach out to folks who might be more effective than the police at getting her services. I doubt that was the kind of prayer walk Gov. Bevin was envisioning, but I think I did my best to answer to that of god in my neighbor, as well as the socket wrench she was carrying. 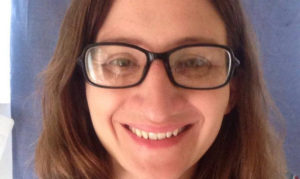