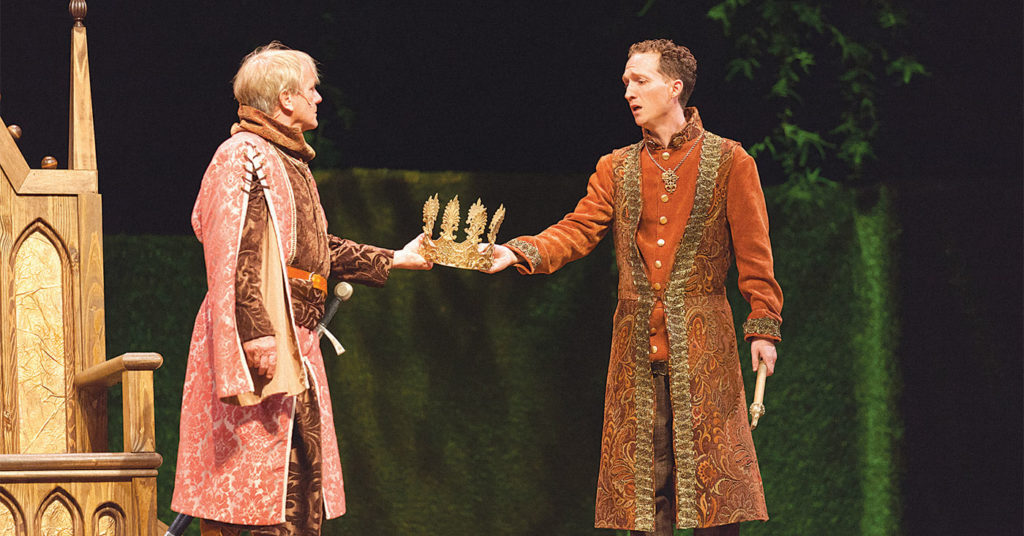 In 'The Tragedy of King Richard the Second,' Tome Luce (l) as henry Bolinbroke, and Neill Robertson as King Richard

Those words passed through my mind during the wrenching climax of Kentucky Shakespeare’s “Richard II,” which just finished a two-week run and returns to the Central Park stage for another run starting in two weeks.

Here’s the situation: The embattled Richard has lost the struggle to hold onto his throne. Except for his Queen and a few loyalists, all of his allies have either abandoned him or been put to death by his adversary Henry Bolinbroke.

Richard has already agreed to surrender his crown to Henry. But Henry’s political and personal needs demand more before he can securely ascend to his new throne. So he summons Richard to Parliament with the intent of staging a public humiliation for the fallen king.

But in an enthralling piece of drama, Richard turns the tables on Henry. To this point, Richard has been a posturing paragon of juvenile self-indulgence. But in this moment of truth he suddenly takes on an aura of majesty — and, even as he yields his crown, he turns Henry into the figurative equivalent of an obsequious manservant whose major contribution to what follows is asking someone to fetch Richard a looking glass.

The intellectual clarity and emotional resonance of the writing makes this one of the finest passages in all of Shakespeare. It is after, the playwright’s treatment of a moment in history that, for an English person of the time, would have been as powerful as, say, the assassination of a president.

And Neill Robertson owns this scene. Nimble and slight of build, he looks more like a court lutenist than a medieval king, and Tom Luce, who plays Henry, has the sturdy look of a battle-hardened warrior.

Director Amy Attaway has cunningly staged this passage — which starts well into one of the longest scenes in the play. When Richard arrives, Henry is prominently high in the set (set design by Paul Owen). Richard rises up as he makes his case. By the time he hands over the crown, Richard is standing taller than the upstart — and, when he descends the stage, he takes all his royal power with him.

Critics — including me — often casually refer to plays as “productions.” It’s a convenient, though sterile, word. And it can give the false sense that a play represents a single viewpoint.

That’s seldom true. And in the case of Kentucky Shakespeare’s “Richard II,” it’s conspicuously untrue. The genius of this “Richard II” is that it feels as if the stage is populated by contending factions fighting tooth and nail for their version of the truth. In its way, “Richard II” is a case study in how patriotism works — and everyone in this story seems to be at heart a true patriot. That includes not only nobles like John of Gaunt (Monte Priddy), who assails Richard for the damage he’s wreaking on England, but a Gardener (also played by Priddy), whose sadness for his country is filtered through homespun metaphors.

The factional divides are complex, readily followed thanks to a useful contextual prologue, finely-hewn performances, and costumes by Donna Lawrence-Downs.

The play is the first in a cycle of four history plays often referred to as the “Henriad” (“Richard II, Henry IV” Parts One and Two and “Henry V”) that Kentucky Shakespeare will present over the next few years under the apt billing, “Game of Kings.” All of these plays have sprawling casts — and we can expect to see actors playing recurring roles throughout. Given that the performances in “Richard II” are outstanding across the board, that’s a good reason to see this play before it closes.

Here are some performances to watch for. Note that, as Shakespeare put it, “a man [or woman] in his time plays many parts,” and many performers are cast in multiple roles.

The fate of Richard’s Queen is, of course, somewhat tied to the King’s — but in a few powerful scenes, Alisha Espinosa reveals the Queen’s own fears and powers. (In an emotionally-laden late scene, Espinosa returns to the stage in another role — as the former King’s loyal Groom.)

Among Richard’s followers, Bushie (Jon Becraft), Bagot (James Stringer, Jr.) and Greene (Gregory Maupin) are quintessential enablers of their King’s peccadilloes. And, eventually, Henry will have the heads of Bushie and Green. (Greg Maupin also plays the Bishop of Carlisle, the lone brave voice who speaks against Henry at a pivotal moment — uttering a dark prophecy that will play out over the rest of the Henriad.)

Earlier this season, Abigail Maupin played a wonderful Beatrice in the comedy “Much Ado About Nothing” — a play that finds her exhorting her new suitor Benedick to kill Claudio, who has slandered her friend. Here, in a far more dire circumstance, Maupin plays a vengeful Duchess of Gloucester, bitterly raging against John of Gaunt when he fails to exact revenge for the recent murder of her husband.

The action of the play begins when Henry (Luce) comes before Richard to accuse another courtier, Mowbray (Crystian Wiltshire) of treason. Their charges and counter-charges — complete with the throwing down of gages (gloves), as they challenge one another to a duel, get the play off to a bristling start.

That scene establishes some of Richard’s essential weaknesses. But when a similar duel-happy frenzy arises among Henry’s loyalists, Shakespeare gives us a comic parallel scene where we learn that even this new King cannot thwart well-established chivalric practice. But the frenzy of flying gloves give free rein for laugh-out-loud comic antics from Chloe Bell, Dathan Hooper, Jon Patrick O’Brien and Shaleen Cholera. Chief among Henry’s loyalists, though, is the grim Earl of Northumberland, played by Jon Huffman with the just the right touch of cold-blooded passion.

As the Duke of York, J. Barrett Cooper does a fine job of playing an English loyalist vexed and torn by the tumultuous forces affecting his nation. But when his own son Aumerle (played by Chloe Bell) is implicated in a treasonous plot, the ensuing fireworks between him and his Duchess (Jen Pennington) are milled into a fine grist of comedy and pathos. •