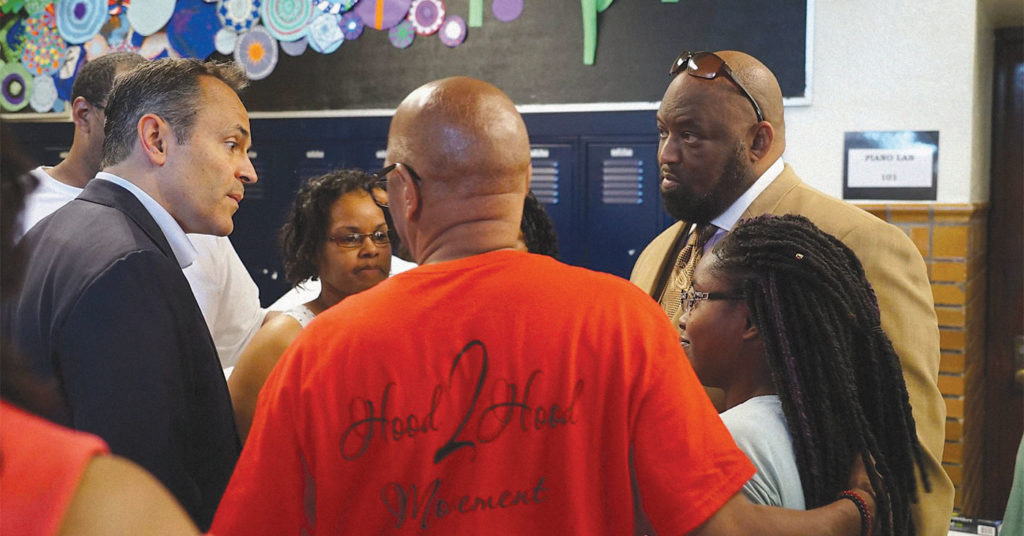 Many years ago, I began closing my LEO columns with, “Until next time, stay strong, have no fear, stand on truth and do justice. Most importantly, do not leave the people in the hands of fools.”

Kentucky Gov. Matt Bevin clearly did not read or heed this charge.

Recently, many citizens waited with bated breath as Mr. Bevin prepared to offer comments on how to address the violence problem plaguing Louisville’s West End, which included the terrible shooting of 7-year-old Dequante Hobbs Jr.

It was a chance for Mr. Bevin to be the visionary statesman so desperately needed at this vertigo moment statewide and nationally. He could have contextualized the historic issues that created communities such as The West End. He could have delivered an intelligent examination of the racism, redlining, educational strangulation, economic exploitation and political neglect that brought us to this moment. He could have been sober in reminding us that the causes of violence in the area are multivariate and will not be solved overnight, but we will bond together, try and be serious in our long-term efforts.

He could have set a course on which The West End would no longer be regarded as a barbaric, atrophied appendage of Kentucky’s greatest city, but a place to be respected and rejuvenated. He could have proposed a “21st Century Global Citizens Educational Initiative” that would include curriculum reform accurately engaging the most racially and ethnically diverse student populations America and Kentucky have ever seen. He could have worked to close the achievement gap by infusing a more progressive talent pool into the K-12 system. Wouldn’t it make sense to intentionally nationally recruit and reward more black male teachers, considering research proves black male students (a lagging population) respond better to black male instructors?

He could have explored growing the state’s black-educated and professional class by allowing residents to attend state universities free of charge for a time in an effort to address historic and contemporary educational and employment disparities. He could have injected more revenue into educational programs that target minority children at all levels. He could have sought counsel from the UofL’s Department of Pan-African Studies that houses more black PhDs than any other department in the state (and maybe the country) to help him construct innovative approaches to everything from education to social psychology to politics to law to religion.

He could have launched a strong community reinvigoration initiative that would construct new, desirable dwellings without pushing long-standing, law abiding residents out in the way normal, racially-charged gentrification plans often do. He could have conceptualized, or at least endorsed, fascinating capital projects, such as Louisville Urban League President Sadiqa Reynolds’ idea for a world-class track and field complex in The West End that would include accompanying businesses. Such a facility would bring travelers, tournaments and vibrancy at a level not seen in the area in years.

He could have reached out to Louisville’s mayor and pushed for a thoughtful exploration of expanding the city’s airport into the nation’s newest major hub, much the way Atlanta did in the 1970s. This is logical given Louisville’s ideal geographic location. He could have demanded that local minority contractors play a prominent role in this expansion. He could have leveraged this in such a way that hundreds of potential local workers (from The West End and beyond) be trained to work in multiple capacities. He could have broken Republican ranks, defied the NRA, and pushed for significant gun-control.

Gov. Bevin could have said and done much and more.

He could have been a leader. He was not.

To be sure, many of us expected little from him. We got even less. Instead of anything rooted in reflection and vision, he stood before the people and told them to pray. That was pretty much it… pray. He advised them to choose blocks, form teams, walk and pray. Seriously, that was it. He told the most religious, God-fearing, prayerful people in the country to… pray!

So, I close as I began. Stay strong, have no fear, stand on truth and do justice. Most importantly, do not leave the people in the hands of fools. We must take this seriously, for Gov. Bevin has once again shown he is not strong, he preys on fear, like many of his Republican friends around the country — he has no respect for the truth, and he has a warped sense of justice. Finally and sadly, I think it safe to say that the Commonwealth of Kentucky is, indeed, in the hands of a fool. •

Dr. Ricky L. Jones is chair of Pan-African Studies at the UofL. Read more at rickyljones.com.