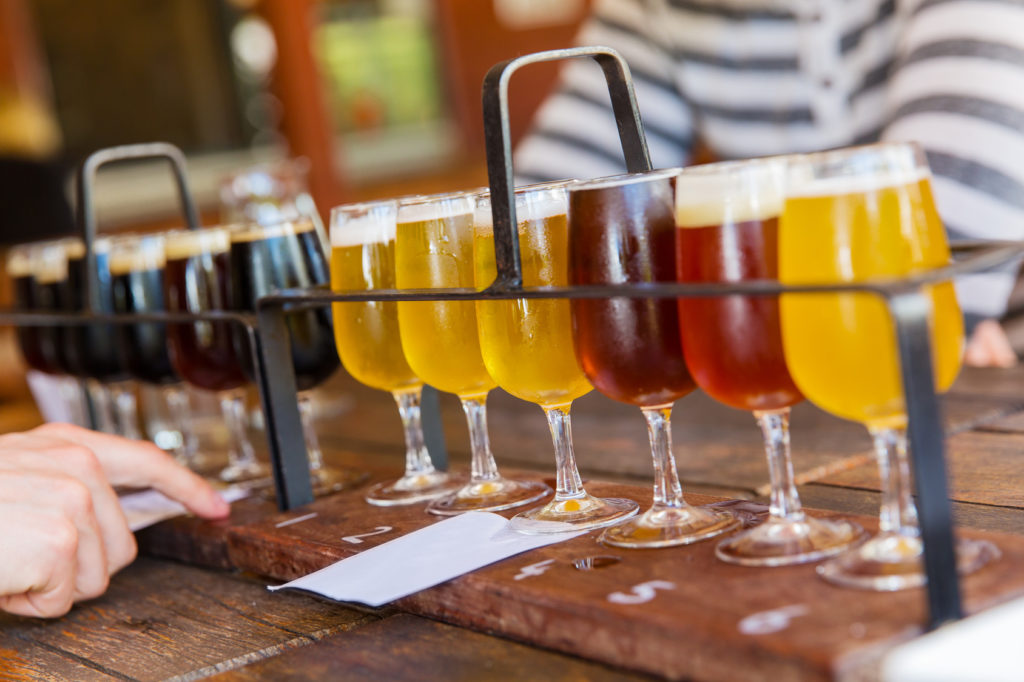 3rd Turn Brewery — Pale Ale
Cut cleanly by a hoppy bitterness at the front end, and followed by a pleasing aftertaste, this pale ale is inviting, with a burnt, golden body and light-foam head. The flavors are rich but subtle, not cloying, with soft floral notes that do not overpower. At 6.1 percent ABV, tread carefully — it catches up with you.

Against the Grain — Brettie Page
The Brettie Page is a bretted saison, made with a wild yeast strain that lends itself to the farmhouse ale style of a saison. This is a mild drink, with a dull-gold body and a low viscosity. Maybe it’s the yeast or the dry hops, but the Brettie Page seems almost flat, with very little sparkle or pop at any point in the flavor palate. A sweetness greets you on the front end, with a smooth finish afforded to a 23.3 IBU, cut ably by a high ABV coming in at 7.8 percent.

Akasha — Goaty McBockface
You may be most familiar with bocks as a fall classic, a dark beer ideal for cooler weather. The folks at Akasha have brewed a delightfully refreshing variety of the style, a mild and wheaty beer that balances a strong burnt malt presence with an easy drinkability. At 7.4 percent ABV, this is a good sipping beer, perfect the porch at night, the lights dim and the company warm.

Apocalypse — Bourbon Barrel St. Christopher
The Bourbon Barrel St. Christopher is truly superlative, one that narrowly edges out a host of excellent summertime options. Featuring a deep golden body, and a creamy head, this is a heavy beer. Despite a 10-percent ABV and an IBU of 56, this is well-balanced, with the booziness of the alcohol content and the strong malt component never becoming overwhelming. Cut softly by light bourbon notes, this is aged four years, forming an incredibly rich palate of flavors.

Bluegrass Brewing Company — LD
The obliquely-dubbed LD is named for the hop variety, El Dorado, which defines this surprisingly crisp and refreshing summertime American IPA. A very hop-forward beer, the LD has a sweet upfront flavor and a dry, but pleasing aftertaste. At 6 percent ABV, this is an easy-to-drink IPA.

Cumberland — Cream Ale
For anyone in The Highlands, the Cumberland Cream Ale is a summertime staple, a crisp, golden-bodied beer that pops on the front end and goes down smooth. There is a sweetness to the beer that is not saccharine, a warm weather treat to keep the sweat at bay.

Donum Dei — Bud’s Pale Ale
By the brewers’ own admission, the Bud’s Pale Ale at Donum Dei is a starter ale, the kind of beer that you use to slowly introduce a customer, perhaps otherwise unaware, to the joys of craft brewing. As such, this is an easy-to-drink light beer with the general look and feel of a domestic, but with the richness of a craft beer. At 4.9-percent ABV, this is a reward-for-mowing-the-grass beer.

Falls City — FC Calliope
A hoppy and refreshing pilsner made even more so by fruit-forward notes, this is easygoing and unassuming, the kind of thing that you drink over a conversation without realizing it. A nice session beer with a beautiful golden body and a taste that just pops, this is highly recommended to take the edge off of a day in the sun.

Flat 12 — Dan Patch
A Belgian Wit that is sweet, but not overwhelming,  it offers mild notes of banana and orange, matched by a subtle coriander and chamomile presence in the mix. The savory elements are an interesting touch to an otherwise straight forward wit style, complementing the sweeter side. This is a charming beer with a low ABV at just 4.7 percent, making it attractive for sessions on the Flat 12 porch, looking out over the Ohio on a sunny day near the bridge.

Floyd County Brewing — Cloud 11 IPA
The Cloud 11 IPA is so clear that light gets through and you can see a little on the other side, although the beer is not especially thin in flavor. A fruited IPA, this is both refreshing and rich in flavor — heavy with citrus notes balancing bitter hop agents. This is certainly on the heavier side at 7.4 percent ABV, but does not come off as especially boozy, so proceed with caution.

Goodwood — Brandy Barrel Honey Ale
A classic Goodwood ale brewed in brandy casks, the Brandy Barrel Honey Ale clocks in at 8.6 percent ABV — a mighty beer, dark bodied but still an inviting summer drink. The balance between the honey and brandy manages to showcase the strengths of both without the weaknesses of either.

Great Flood — Beer-X-Tacy Vol. 2
So named for the bygone and beloved record shop, the Beer-X-Tacy Vol. 2 is the second iteration of Great Flood’s citra-hopped saison. Light in body like a pilsner, but just a little cloudier, this is a hearty beer not unlike a Bells Two Hearted, but with less floral notes. All told that makes for a smoother finish, crisp and on the lower end of alcohol content at 6.5 percent.

Mile Wide Beer Co. — Nomah
Mile Wide’s Nomah, a Northeast Scavenger, is especially mild and smooth going down. Never have I experienced an IPA that is as thirst-quenching as this, made more so by fruity notes. You catch that slight hoppy bitterness on the back end, which plays well with the sweet aftertaste for an astonishingly original flavor combination.

Monnik Beer Co. — Voorjaar
A spiced saison unlike almost anything you’ll find on the market, local or otherwise, the Voorjaar has spicy notes of ginger and cardamom that dance on your tongue, ending in a little sourness for a tangy aftertaste. This is a bright beer that pops at the front and ends with a strong and distinct flavor. The alcohol content is moderate at 6.4 percent ABV.

New Albanian Brewing Company — Hacksaw Jim Dunkel
A dunkel-style beer similar to an Aventinus, this German-inspired dark ale has spiced notes that make for a rich, but measured balance of sweet and savory. Unlike other dunkels, this carries a low, 5.5-percent ABV and 18 IBU that makes it easy to sip and enjoy without going too hard.

Old Louisville Brewery — Belgravia Blonde w/peaches
This a perfect example of a clever summer beer — sweet, but not sugary. Backed by a 5.7 percent ABV, this is ideal accompaniment for a long afternoon retreating into the shade and kicking back.

Red Yeti — Red Foot Raspberry Wheat
Like the Belgravia Blone, the Red Yeti Red Foot Raspberry Wheat is a hearty wheat ale cut with fruit. The raspberry notes are sweet, but mingle well with the wheat body for something flavorful, but not staggeringly so.  A lighter beer, with a sweet aftertaste, this clocks in at a low ABV of 5.6 percent.

Holsopple Brewing — Hefe American Wheat
A sweet American wheat hefeweizen with a cloudy, golden body, the HAW is the perfect patio beer. Clocking in at 5.4 percent ABV, this is easy to drink, so you can slowly sip and savor it to quench your thirst. With a pleasing aftertaste that features notes of coriander and is  haunted by vague citrus elements, this is wonderful on a hot summer day.