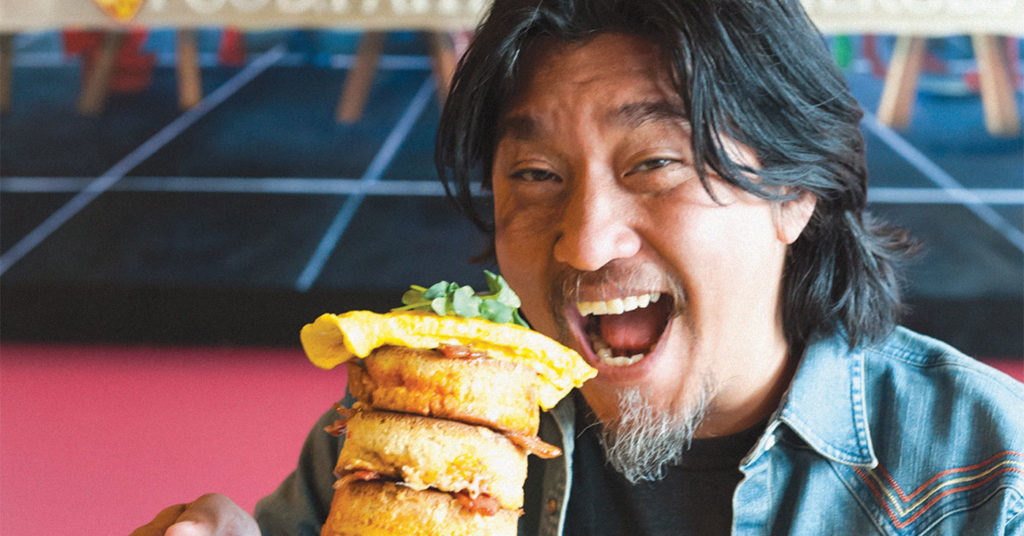 Come on, admit it. You tell time with your stomach. You plan your day, nay — your week — by deciding what you will eat next — and when. So for the 2017 Dining Issue, we decided we would offer you eight possibilities of what to eat for breakfast, lunch, dinner and late-night in Louisville. Four local chefs and four people (who, like you, know what they like to eat) told us how they set their comestible clocks. One takeaway — the wide range in choices showcased the city’s diverse food scene. Also, don’t miss LEO writer Michael C. Powell’s tasteful critique of out-of-town food writers.

After they had the tragic fire at the original location, it was unclear if Chef Darnell Ferguson would be able to bounce back. Luckily for all of Louisville, he did, and it’s better than ever. His menu is fun and over the top, but with serious technique involved. I always get the soufflé pancakes — they are completely unique and delicious. Red Velvet is a favorite. Also the Granola Crusted French Toast is a winner, and don’t forget the red pepper grits. If you are in need of a lot of calories, get the SuperChefs’ Omelet, and you won’t have to eat for the rest of the day. My daughter loves the superhero-themed restaurant, and it is so refreshing to go to a place that is fun, and the service is gracious ,while, at the same time, serving food that is done right. This place is super for many reasons, but mostly because everyone there seems to really care about giving you a great experience, and I have a feeling that comes straight from the super powers of Chef Ferguson himself.

Fresh is the first word that comes to my mind when describing the food at my current favorite breakfast spot in Louisville. I took the opportunity of this writeup to introduce Con Huevos to two people who had never been there, including my mother. Granted, it was a gorgeous day, but the sunny, airy feel usually belies the tiny space Con Huevos occupies in the heart of Crescent Hill. Regardless of the wait, I’ve always found the staff to be pleasant and, more importantly, efficient in their handling of the inevitable crowds (Note: you must order and pay at the counter). This includes their handling of online carry-out orders for customers who don’t feel like waiting in line. On to the food: We shared a plate of Mexican Sopes — deliciously-fried masa cakes topped with refried black beans, chicken or pork — and a plate of the Chipotle Poached Huevos — perfectly poached eggs on biscuits topped with chipotle gravy, fresh avocado slices and chorizo. The black bean sopes were an instant hit, and my mother, who typically doesn’t eat meat, made an exception for the chorizo, and was not disappointed. We didn’t get to try some other highlights on the menu, like tres leches pancakes or the tamale with mole sauce, but it’s a safe bet we’ll be back. To someone who has witnessed Louisville’s Mexican food scene go from basically Taco Bell and Chi-Chi’s to some seriously authentic eats over the years, I’m glad to see Con Huevos is making standout Mexican food in this cozy, bright neighborhood space.

Since I moved here from California over 20 years ago, I have been going to what I know as Karem Deebs (but is now Morris’). There is just something to be said for a simple sandwich made the right way and done that way for years. The smoked turkey on toasted ciabatta with lettuce, tomato, onion and their house habanero pickles is so simple yet packed with flavor. That’s not the only thing though. Pimento cheese, shaved country ham, house-made soups, smoked tuna salad… I’m getting hungry just talking about it. I think when you do what I do every day, it’s the simple things that you crave. My management team and I order lunch from them at least once a week! The people at Morris’ do serious volume from that little counter and there’s a reason why! They just do it right.

I keep kosher. Since there are no supervised kosher restaurants in Louisville, when I want to go out to eat, I stick with vegetarian options and fish with fins and scales. One of my favorite places is Roots. It’s vegetarian. I can eat anything on the menu, unlike at most restaurants where I’m lucky to find four or five options. Sometimes I spend more time perusing the menu to find something I’ve never had than I spend eating (I eat fast). Only once I made the mistake of ordering a large soup plus an entrée, and I couldn’t finish them. The Pho, Vietnam’s classic noodle soup, is one of my favorites because of the forbidden fruit quotient in the fake ham (I keep kosher, remember?), and the Butternut Squash soup is so sweet it may as well be on the dessert menu. I always love a mozzarella-tomato-basil Caprese and at Roots it transcends with smoky tea-infused vinegar. The Ginger Poached Pear and Red Grapefruit salads sometimes leave room for the Crispy Potato Nest or Vietnamese Crepe (see ham comment above) or Pan Seared Ravioli. I always try a different tea. I had to have a Yerba Mate after seeing “Mozart in the Jungle.” But where’s the straw?

When I’m looking for a good place to eat/drink, I find myself more times than not ending up at The Post pizzeria. Whether it’s for a late-night bite, beer after work, watching sports or taking the family out for dinner, we always find it to be consistent, affordable, and, of course, delicious! Since its arrival to the Germantown neighborhood, I have established myself as a pretty current regular and gotten to know the wonderful staff and owners quite well. (I can walk there in five minutes.)

If I’m alone, I always go for a single, giant slice of either the pepperoni or one of the unique slices of the day and one of the great 16 rotating beers on draft. (If The Post is doing the Reuben slice, always get it.) For the whole pie, I really enjoy “The Army Brat.” If I find myself getting pizza’d out, I’ll opt for the Italian sub or the pesto bread as great alternatives. On Tuesday’s, make sure to take advantage of the $5 pitchers and sit on the patio so you can enjoy people watching the extremely diverse residents walking around Goss. It’s a hoot!

I don’t go out to eat often. I’m a nutritionist — and maybe a bit of a food snob — and know I can make healthier, cheaper versions of restaurant food at home. But sometimes you have to indulge, especially in a city with so many great options. If I’m going to drop some dough on a meal, I usually head to one of the 10 incredible restaurants in a three block strip of East Market Street. Take Wiltshire on Market. It uses the same ingredients I use at home — local, seasonal and organic produce and meats. When I cook them, I feel like I’m eating like an old world peasant in from a day in the fields. But At Wiltshire, those same simple foods make me feel like royalty. Maybe it’s the restaurant’s intimacy. Or Chef Rory O’Connell’s perfect use of herbs, citrus and cream to lift up earthy meats and vegetables. The menu changes weekly, and this week I feasted on a kale caesar salad (Ashbourne Farms kale), French onion soup made with Boone Creek Gruyère, sauteed broccoli, roasted acorn squash, red cabbage (veggies from Ashbourne Farms) and a tahini vinaigrette. And because I am a healthy hedonist, I also got down on the 3-D Valley Hanger Steak with Bourbon Barrel Soy glazed turnips and togarashi butter. The meal was like it always is — perfect. And because the dishes favor vegetables and meat, I leave feeling satisfied yet energized. This is one of my favorite places in Louisville to eat like an old world peasant — but feel like a queen.

I don’t mean that in a negative way, though the implied connotation isn’t lost on me. Smashburgers, noodle soup, chicken livers, Swiss cake rolls… sounds like a four-course meal. After a long day at work, 14 hours on my feet, the last thing I want is to sit down for a well-rounded meal. Luckily for me, I live less than a mile from, and squarely in delivery range of, the little Preston Highway-Fat-Kid-Oasis known as New Wave Burritos. My first foray into the menu became my last foray into the menu, as it revealed a dish known as “The Garbage Burrito.” Say no more. Decadence replaces elegance as you dive into a massive tortilla wrapped around ground beef, refried beans, queso, jalapeños, sour cream and rice. Though massive, the ratios are always on a point, and, for $11, plus tip (if you’re a good person), they’ll deliver it directly to your door at 3 a.m. Extra hot sauce is free, and, though I’ll probably die before 50, I find solace in New Wave likely being around to see me out.

Indi’s is a childhood staple for me and others in Louisville. It’s one of the classic soul-food restaurants in town and never really gets old. While we’re on the subject, Chicken King is a great soul-food spot as well, but Indi’s is usually closer to some of the venues where I perform. My go-to meal is the two piece snack box. It’s something that was introduced to me by my father at an early age and is a meal that can fill you up for cheap. Sometimes, I switch it up and go for the peg leg pieces. The only side I get is the wedges, but some occasions I will try greens. Most meals come with a roll, and the pink lemonade is a must. Definitely get the pink lemonade. Indi’s is one of those places that will never get old and will forever be ingrained in the fabric of Louisville.