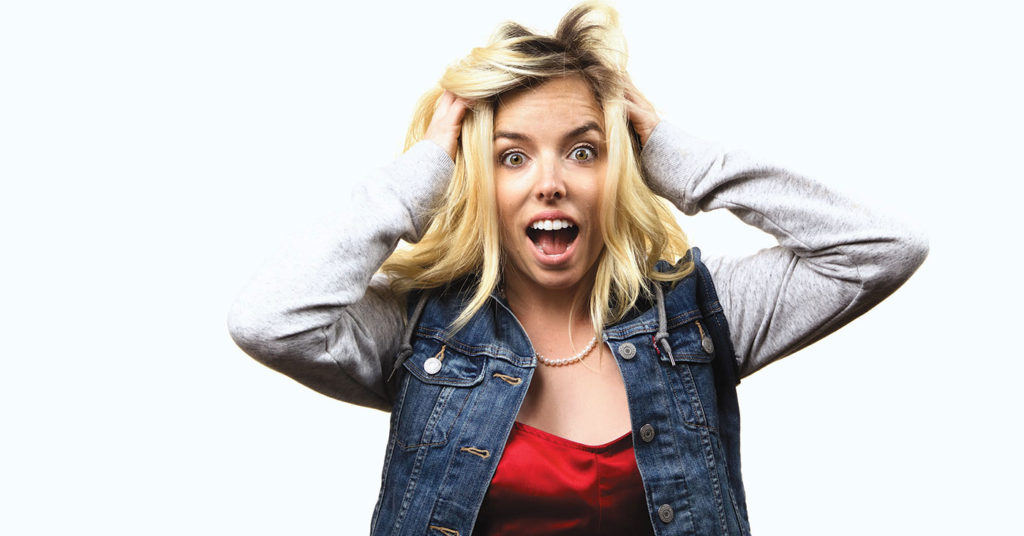 Humor can sometimes be found in the darkest of places. Such as an 8-year-old girl abandoned by her father in a Waffle House. Ask comedian Jessica Michelle Singleton. Her stream-of-consciousness brand of comedy led Los Angeles’ legendary club The Comedy Store to offer her the coveted honor of being a “Paid Regular.” Recently, Singleton released her debut album Please. Don’t. Leave. Me., which hit No. 1 on the iTunes comedy chart. She also hosts a podcast called “Ignorance is #Blessed.” This week, she makes her Louisville debut at The Bard’s Town. Connor McSpadden will also be on the show.

LEO: What was your family life like?
Jessica Michelle Singleton: It was a pretty chaotic family life. I was more or less raised by a single mother. My father abandoned me in a Waffle House when I was 8 years old. We were living in southern Mississippi at the time, so my mother packed us up and moved us to Alaska. That’s the extent of mental stability we’re dealing with.

You talk about sex a lot. You talk about your father abandoning you. Is there anything too personal for you to take to the stage?
Nothing is off limits as long as it’s funny, which means there’s a lot of stuff that I want to talk about that I haven’t, but only because I haven’t found a way to make it funny. I would love to do something about depression. I suffer with a form of it, and I know a lot of other people who do, as well. It’s a common thing that no one talks about. I also have a weird number of friends who have been murdered. I haven’t found a way to make that funny, or comfortably talk about that on stage. But I aspire to eventually get there. Also, you have to be pretty healed with something before you can be comfortable talking about it, so an audience can be comfortable hearing about it. I talk about my father abandoning me in a Waffle House, I’m over that. I’ve healed. But for people in the audience, I sometimes forget it’s their first time hearing that, and they immediately get lost thinking how awful that must be. It’s almost an art to itself, keeping the audience from getting hung up on the sad stuff, and getting them to laugh at the funny parts.

Where did the idea for the ‘Ignorance is #Blessed’ podcast originate?
I came from a bit of a Republican background. Catholicism. I just kind of did what everyone around me was doing. As I got older, moved around, met other people from other cultures. It sort of opened me up and changed my perspective a little bit. The show itself isn’t political. It’s that we’re living in this culture where people are afraid to ask questions. Everyone’s afraid of looking stupid. I wanted to create a safe space for people to ask questions. You can ask about Black Lives Matter and not be a racist. You can ask about the divinity of Jesus and not be anti-Christian. So I think of it as me taking the bullet for people who are afraid to ask the dumb questions.

You just did a tour of Africa. How does your material translate to such a different culture?
I was mostly in South Africa, and because of apartheid, there have been huge racial tensions there for years. And comedy is relatively new there. So all the comedy I heard was race-based. Of course, because it’s such a huge part of their lives. That’s what they know. That’s what’s in their daily lives, so that’s what they’re going to talk about. When I came in and was just not talking about that, people said it was refreshing. I even had a few women come up to me and say: ‘I didn’t even know you were allowed to say that.’