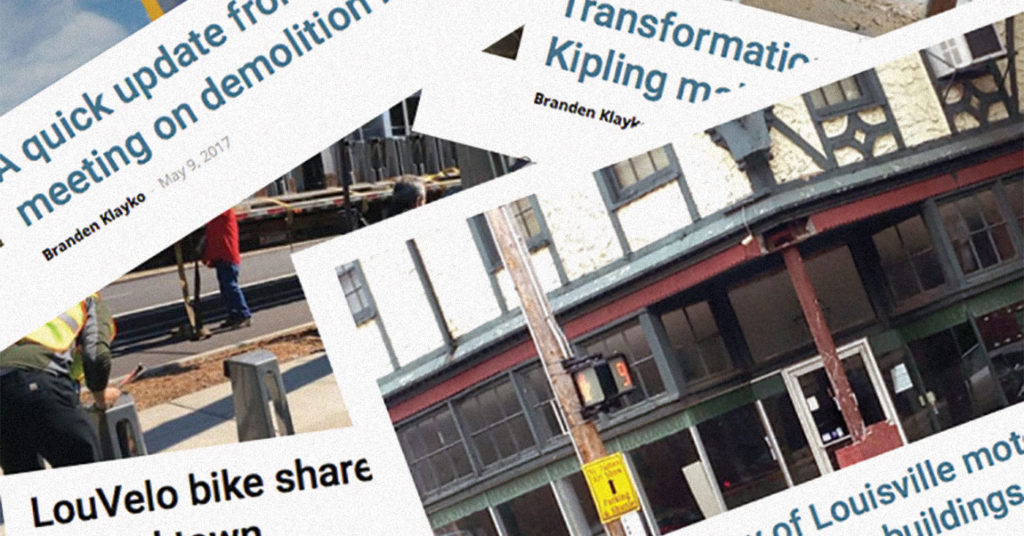 “I like cities. And architecture. And urbanism, design, and history. Find me @brokensidewalk”

That is how Branden Klayko’s profile on Twitter reads.

What is missing is that he also loved Louisville and showed it by working to make it a better place through his must-read blog Broken Sidewalk.

Klayko has died at 33 after a battle with leukemia. It is a profound loss for the city. We will miss his authoritative, clear, witty voice on development, design, architecture, urban planning and many related topics. On the website, he described himself and contributors as part of “a community interested in the future of Louisville. We are young professionals, small business owners, independent musicians, medical researchers, architects, students, teachers, and neighbors. In short, we are Louisville and we are compelled to know what’s affecting our neighborhoods and our lives.”

Klayko started Broken Sidewalk in 2008 while practicing architecture in Louisville, and continued it while living in New York City, returning to Louisville in 2016. He wrote: “There’s something about Louisville that always draws you back. It’s got a certain magnetism — the boomerang effect — that feeds a hunger for more. The community here is stronger than in many other cities. It’s the type of community that knows itself and its peculiarities — and celebrates them — despite being in the center of colliding milieus — is the city Southern or Midwestern, urban, suburban, or rural, among others. It’s that uncertain context that gives the city its distinct flavor. And we here at Broken Sidewalk hope to be part of the discussion that might shape the community for the better once again.”

He was a graduate of the College of Architecture at Washington University in St. Louis, and had covered architecture, design and urbanism for The Architect’s Newspaper, Designers & Books, Inhabitat and the American Institute of Architects.

His funeral will be at noon Friday at Pearson’s Funeral Home. Visitation there is from 4-7 p.m. Thursday. Donations may be made to the Louisville Historical League.

Here is just a tiny sample of how he is being remembered:

“I’m so sad and heartbroken to hear of Branden Klayko’s passing …When I was revamping the concepts for my artwork about seven or eight years ago we had many long, in-depth, humorous and hopeful conversations about a changing Louisville and about the growth of cities in general. His progressive ideas and dedication to Louisville and urban thought were a huge influence on me as well as him helping me turn a corner in my work … Much love BK, a legend for Louisville.”—Ashley Brossart

“Branden was an inspiration and urbanist comrade. Our times spent discussing and exploring the city we love will forever be special to me. Given his gift for identifying and uncovering the stories of our built environment, and his particular interest in the hidden side of the city, I’d like to see one of our great unnamed alleys named after him.” —Patrick Piuma

“Branden’s return to Louisville felt like a renaissance … Through Branden’s work, I realized how things like zoning, urban planning, mixed-use development and preservation were essential to the fabric of a community. Branden had such a measured, intricate, expansive and yet infinitely interesting way of presenting problems as challenges. I always thought Broken Sidewalk seemed like a misnomer, seeing how his optimism shone through the brokenness. I realize it was his well-balanced ideas and deep faith in this community that will continue to set an example on how to fall in love again and again with a place …”—Mary Beth Brown

“Branden was a thoughtful, intelligent writer who challenged us to make the city better. He loved his hometown but saw ways it could be improved, and his writing went beyond criticism to offering specific ideas for improvement. His voice, his ideas and his vision will live beyond the short time he was with us.” —Mayor Greg Fischer