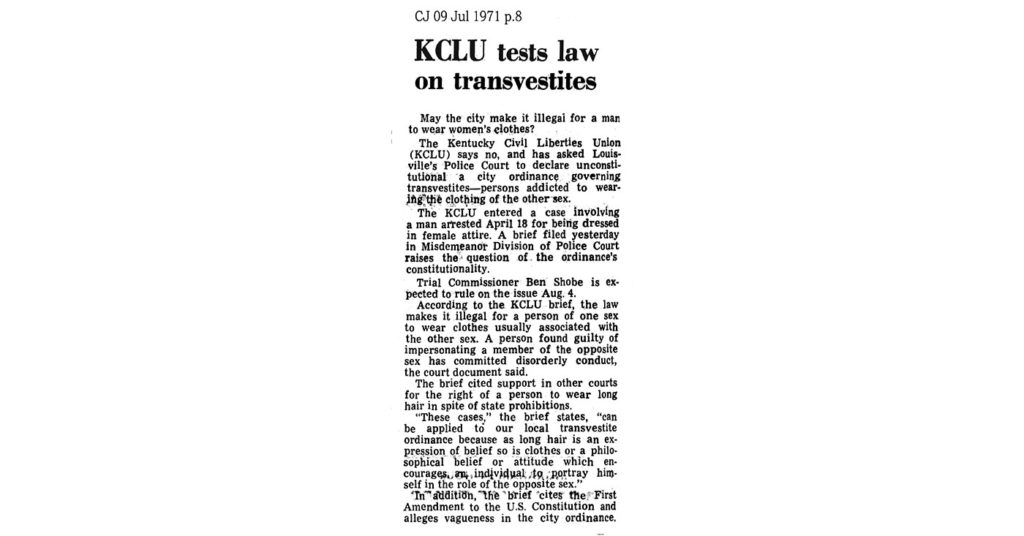 While researching the Courier-Journal archive for something entirely else, I encountered a brief article from 1971 headlined “KCLU tests law on transvestites.” I was intrigued. I never heard of the case. I realized that I’d never thought much about the legal machinery of routine and dehumanizing harassment of LGBTQ Louisvillians in the all-too recent past.

In July 1971, the story said, the Kentucky Civil Liberties Union, or KCLU, had asked Louisville’s Police Court to declare a city ordinance unconstitutional because it defined as disorderly conduct “appear[ing] in public in the dress, guise, or apparel of a member of the opposite sex with intent to counterfeit the opposite sex.” The KCLU claimed it violated the defendant’s First Amendment right to free expression and it also challenged “vagueness in the city ordinance,” the specific ground the U.S. Supreme Court had used to strike down nearby Cincinnati’s unlawful assembly ordinance a month earlier.

The case involved a man arrested “for being dressed in female attire.” It is hard to translate the term “transvestite” as it existed in the parlance of an early 1970s police-beat reporter into modern terminology. The defendant could have been a person who fits the modern definition of transgender, a drag performer, or merely a gay or lesbian person whose dress didn’t conform to the arresting officer’s own personal concept of gender norms.

According to the reporter, the KCLU brief (which I have been unable to find) cited “support in other courts” for the existence of a “right of a person to wear long hair in spite of state prohibitions.” “These cases,” the brief argued, “can be applied to our local transvestite ordinance because as long hair is an expression of belief so is clothes” reflecting “a philosophical belief or attitude which encourages an individual to portray himself in the role of the opposite sex.” The KCLU probably cited Breen v. Kahl, a 1969 federal case where the court struck down a hair-length requirement at a high school. From similar cases involving cross-dressing laws in other states, I’d surmise the KCLU also argued that the ordinance was void for vagueness under the due process clauses, because the fashion for long-hair and unisex blue-jeans had made determining the “dress, guise, or apparel” of the “opposite sex” impossible.

Ben Shobe (a pioneer African-American jurist in his first year as a judge) was “expected to rule on the issue” on Aug. 4, 1971, but there was no follow-up story. A quick Westlaw search indicates no published appeal. I wanted to find out what happened to the case, but as a law librarian and historian I knew that there were many reasons a story would be reported once and never be heard from again. Cases get dismissed and reporters move on to other stories. The Courier-Journal’s restraint in not naming the defendant made it impossible to pull the case at the state archives.

Nonetheless, I thought it worth at least trying to establish the story’s historical context because the early 1970s are such an important period in the history of LGBTQ rights in Louisville — highlighted recently by Catherine Fosl’s 2012 Ohio Valley History article on the Louisville Gay Liberation Front and the amazing story of members Marjorie Jones and Tracy Knight’s 1970 fight to get a marriage license. The counterculture of the 1960s and early 1970s had awakened the political consciousness of the city’s disenfranchised communities. Progressive institutions, such as Louisville’s first alternative newspaper, The Free Press, were open to the struggle by the LGBTQ community for its rights. These forgotten stories are coming to light because of researchers like Fosl and the dogged work of collecting by gay rights publisher and archivist, David Williams, whose archives at UofL help document the era.

The ordinance in question defined as disorderly conduct the “appearance in public” of any adult “in the dress, guise, or apparel of the opposite sex with intent to counterfeit the opposite sex.” This relatively vague language — the word “counterfeit” being more appropriate for commercial fraud — was not old. In 1967, a one-sentence disorderly conduct ordinance was replaced with a sprawling  monstrosity with 32 separate sub-sections that criminalized just about everything from throwing snowballs to public profanity involving the “reproductive methods of males and females,” as well as the usual loitering, panhandling and public sleeping provisions long used by urban police to harass African-Americans and homeless people.

Louisville wasn’t the only place with a cross-dressing ordinance; many cities gave police this tool in order to prevent any public display that transgressed heterosexual norms. These laws were well known to Louisville’s LGBTQ community as a potent instrument of police harassment. In a 2015 coming of age memoir in William’s Community Letter, Richard Coomer recalls being 18 and gay in Louisville in 1970. “We could be arrested at any time” at places where gays and lesbians met (he mentions Cherokee and Central Parks, or the main branch of the library on 4th and York). At his first visit to the Downtowner (a private club that was then Louisville’s only gay bar) an employee sat him down and “explained the rules.” No drugs or weapons and “if there was any cross-dressing I would need to have three items of male clothing on or the police could arrest me.” The idea there was a “three-items” rule was widespread; it comes up in many histories of the LGBTQ experience in America. It was a powerful symbol of the boundaries of personal expression for gay Louisvillians.

The cross-dressing statute was still on the books until 1997 when Louisville completely rewrote its disorderly conduct ordinance, but by then it was a dead letter.

Six years after the KCLU case, a similar case came before Jefferson Circuit Court Judge George H. Kunzman. There, a 21-year-old man was arrested wearing “blue denim clothes and makeup” in public. Kunzman ruled the ordinance unconstitutionally “vague and overbroad.” Coomer recalls how the mayoralty of Dr. Harvey Sloane saw an easing of heavy handed harassment of the gay community. When the city council revised its disorderly conduct ordinances in 1997 they erased a sad relic of the darker days for human rights in Louisville. •

Metzmeier is the associate law librarian at the UofL Brandeis School of Law. He is the author of “Writing the Legal Record: Law Reporters in Nineteenth-Century Kentucky” (University Press of Kentucky, 2016).