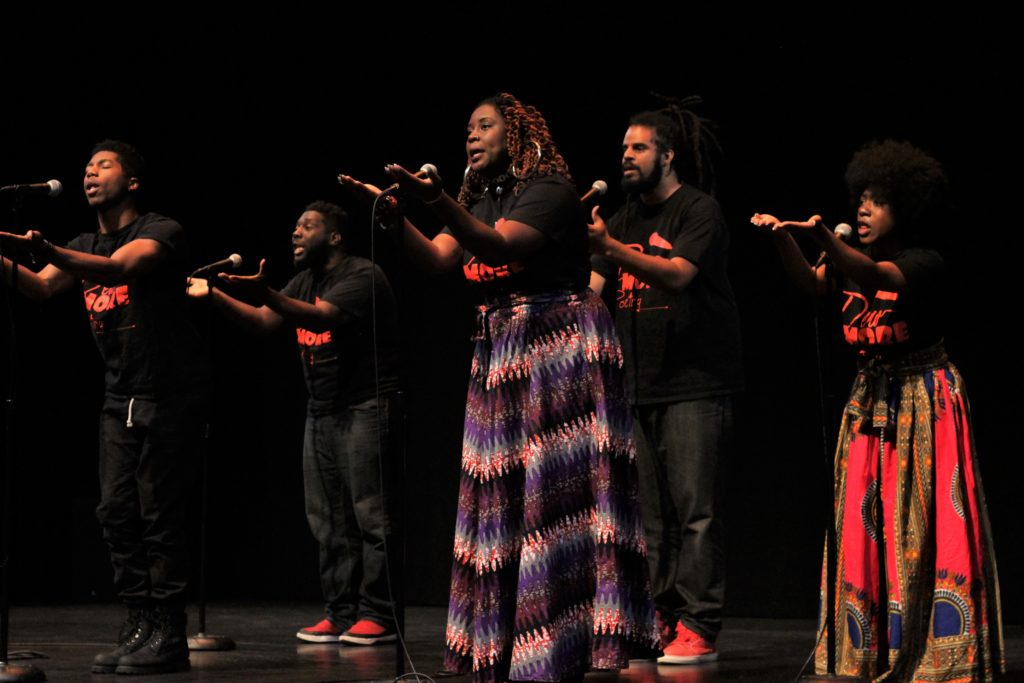 Last week, one of the nation’s biggest poetry festivals, Southern Fried, came to Louisville for the first time. For four straight days, The Kentucky Center for the Arts and KMAC Museum turned into the epicenter of America’s slam poetry scene.

Slam poetry is a competitive form of spoken word, during which poets perform and are scored, narrowing the field until a winner is crowned. Depending on the kind of slam it is, winners often compete for cash prizes. At big festivals, poets compete separately and in teams, and, while all the poetry is amazing, it’s hard to beat the sheer power of five poets onstage performing a group piece.

Southern Fried Poetry began 25 years ago, with a small festival in Asheville, North Carolina. The first year it had no prize money to give winners, so it offered poets bragging rights, RC Cola and moon pies. There’s more money on the line now, but winners still get those moon pies.

Last Wednesday, when I arrived at The Kentucky Center for the first day of preliminary competition, the air felt like summer camp. Eager poets were arriving, excited and giddy to see friends they’d been missing.

I spotted Anthony Trotter, the coach of our home team, Loohavul Lip. He stopped to give me a quick word about the competition.

“Definitely excited, ready to get started. We’re actually starting here in a few minutes,” he said, as he hurried off to Mary Todd hall.

The KCA was set up with four rooms for competition, so at any point there were four competitions, which are called “bouts,” going on with dozens of poets competing in each room. Ready to root for the home team, I followed Trotter.

Through no fault or planning of my own, I ended up judging three slams. In the first, the slam’s host, JG Juggernaut, described how harsh a good judge needs to be, informing us that with a scale of one to 10, we should never award a poet a 10.

“There’s no 11 to give,” Juggernaut said. “Tens are as rare as unicorns who fly to your home with a puppy in their mouth.”

The comedy here is that, while hosts often instruct judges to be harsh, they also instruct the audience to boo the judge who gives the lowest score.

I got booed a lot. Given the charge of being strict but fair, I tried to be consistent. I was consistently the lowest-scoring judge —perhaps, because my day job as a critic and journalist had prepared me.

For the poets, the competitive element isn’t quite as important as the personal expression, the development of everyone’s art, or the inspiration poems offer to those working to make changes in their communities.

But it is still important, and contests often come down to a tenth of a point.

As an added bonus for the winners of each slam, there were custom-made Louisville sluggers, emblazoned with the name of the competition, and the Southern Fried logo.

All the poets that I saw win carried around their bats for the rest of the competition. Like every other family, there is still sibling rivalry, and bragging rights matter.

I’ve been following and covering the local slam scene for several years now, but the first bout I attended at Southern Fried was the greatest two hours of poetry I had ever heard. And I’ve been to some incredible local slams.

Like our local slams, Southern Fried is predominantly African-American. Poems frequently address systemic racism, Black Lives Matter and the deaths of people of color at the hands of authority. Unlike most local slams, Southern Fried also brings a good number of Asian and Latino poets. It broadens the social-justice conversation to include new Americans, legal and illegal immigrants and second generations who still face discrimination.

Each bout consist of four rounds, and in this first bout, I found an immediate favorite, a group out of Baltimore called Slammageddon. It’s actually a combination of two Baltimore teams, both of which are comprised of poets who are nurtured by the nonprofit Dew More Baltimore, which offers programs to youth and adults.

Most poets have stage names, and Slammageddon is no exception. Their group includes Black Chakra, Slangston Hughes, Meccamorphosis, Lady Brion and Grim Jackson.

They exhibit a razor-sharp ability to combine specific ideas, or personal experiences, with larger themes, while simultaneously using sound and rhythm, and switching back and forth between humor and gut-wrenching observations about the inequalities of the world.

Without particularly planning it, I saw one of the Slammageddon poets perform in several of the slams I attended, a guy named Slangston Hughes.

Hughes is a Philadelphia native, and he’s lived in Baltimore since college. His affection for rhyme goes back much further.

“When I was 8 years old, I followed my cousin around and did everything he did. He entered a rap contest so I did too,” said Hughes. “I got up there, was like, ‘Wait, I don’t know how to rap.’ Just stared at everybody for 30 seconds, then just started freestyling and won $15.”

He has formidable presence as a solo poet and in Slamaggedon’s group pieces. But in those group pieces, he frequently stands in the back, taking few solo moments, allowing younger members such as Grim Jackson and Meccamorphosis to take the spotlight. Hughes wants to give that back. It’s pretty common to find poets who work with the youth, sharing poetry with the next generation. It leads to an interesting array of ages among the poets. Nowhere is the age better displayed than at The Slam Master’s Slam. This is a slam known for attracting the “old heads,” a term used to described poets who’ve been in the scene for decades. The Slam Masters are also the ruling council of Southern Fried, making decisions about host cities, and judging any problems or questions of procedure that come up in the four days of competition.

So the competitors are all older poets, while the audience is mostly the younger poets.

The Slam Master’s Slam — which was held early on the second day of the festival — raised the level of poetry even higher. While most of the slam masters aren’t in the main competition, they stepped up to the stage — in the mayor’s gallery at City Hall— and proved their bona fides with ease. They are masters.

Hughes performs, and his second piece is a stirring call to arms. He remind poets that their work needs to be “less diagnosis and more treatment.” The piece ends with a fierce charge laid upon the audience, to go out and bravely love in the face of tragedy and hate.

It’s the first poem that makes me cry, but not the last.

Side Slams and Parallel Universes

The main competitions for individuals and teams have the largest cash prizes, but the four days of Southern Fried are just as much about the workshops, open mics and side slams.

Workshops cover topics like the fundamentals of business and the art of self care — nuts and bolts stuff to keep you creating. They also include workshops aimed at getting you writing.

On Thursday, I in participated in a get-you-writing workshop called “Multiverse Theory,” led by a poet named El’Ja.

El’Ja used a passionate description of the DC Comics parallel universe story arc “Flashpoint” to explain a writing prompt he wants the 20 attendees to participate in.

The next day, El’Ja hosted the nerd slam, a combination of a trivia contest and poetry competition.

Their poem examined white privilege and white supremacy, using Superman as an extended metaphor, comparing him to Goku, a character from Dragon Ball Z. Like many of the poems at Southern Fried, it is a poem about the struggle to find and own one’s identity, as well as the struggle to survive.

“I feel like nerd culture has definitely helped me find people who feels similar levels of estrangement or ostracization from mainstream culture,” said Shi.

Directly following the nerd-slam is the LGBT slam. The intersection of identities are explored again when an Asian bisexual poet describes how white straight girls tell him they never date Asian men, while a white gay man told him that he dates only Asian men. By the end of the poem you just wanna hug the guy and tell him it doesn’t matter what his sexuality is — he’s worthy of love.

I didn’t have to judge the final team event. Thank goodness, because, once again, the poets raised the bar.

To consistently see the levels of excellence ratchet higher and higher shows another reason poets attend Southern Fried. As local poet B Shatter is fond of saying “You are only as good as your competition.”  These poets, from cities all over the country, push each other to ever loftier summits of lyrical greatness.

Slammageddon made it to the finals. They were joined by teams from Boulder, Colorado; Newark, New Jersey; and Greensville, South Carolina.

All the teams are great, but I unabashedly rooted for my team. I actually understood, for perhaps the first time in my life, what sports fans feel during big games.

There were an insane number of high scores, tens all over the place. The technical prowess on display was second only to the bravery.

Another poet, a big man, asserted his self-worth in a blistering refutation of the show “Biggest Loser.”

Slammagedon’s last piece was a solo from Black Chakra.

“I never prayed until I became a teacher,” he said, before launching into a story of love and loss so personal and profound I can’t quite bring myself to talk about it in print. It’s his story to tell.

By the end, when his voice was hoarse from yelling, and he was physically shaking from the exertion of performing, he exited, missing the stairs when he stepped off stage. He sort of caught himself in the act, attempting to turn the misstep into a jump, but he’s unsteady on his legs.

But his team was there, at the edge of the stage, ready to catch him.

It comes down to a few tenths of a point, but Slammageddon took the bat, the prize money and all the moon pies and RC cola they could carry.

In one last demonstration that this competition, no matter how fierce, is about community and love, Slammageddon and all the final teams came onstage to throw those moon pies into the audience. It’s a Southern Fried tradition.

People were jumping, hollering and stretching to catch the sugary snacks, and it was like summer camp again.

For four days, the poets shared every emotion possible. Now, as they prepare to walk back out into the real world — a world with racism, homophobia, discrimination against immigrants and the children of immigrants, a world that would in many cases kill them just for who they are — these poets filled the air with fierce, defiant, exhilarating joy.