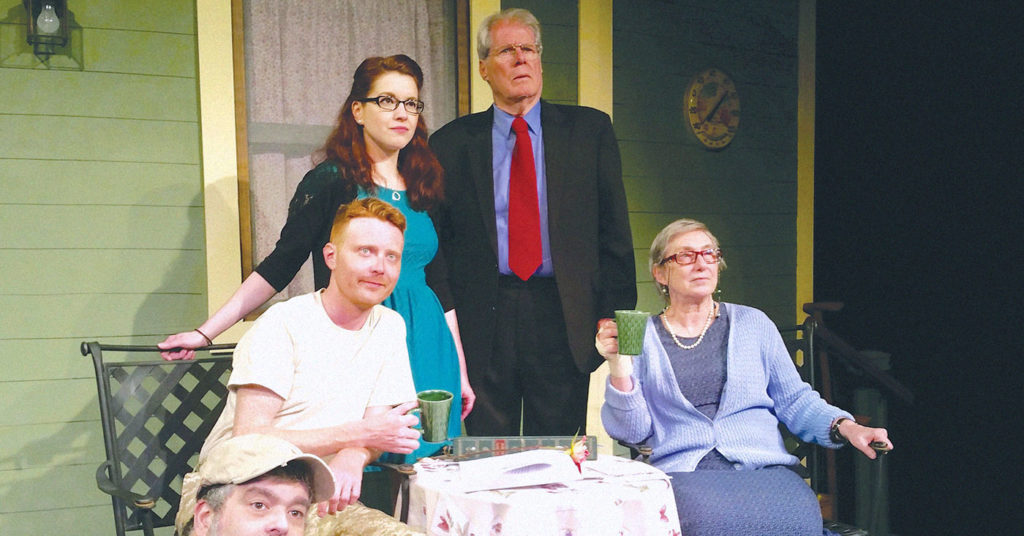 The lock on Edith Jones’ front door has been broken for years — and that’s just fine with her.

Edith (Laurene Scalf), the central character in “Stages of Bloom” by playwright Liz Fentress, isn’t afraid of anything that’s likely to come down her country road and step onto her front porch. She’s in her early 90s, but so irrepressibly full of courage and curiosity that the idea of locking anything out of her life is inconceivable. She’s suspicious of only one thing: certainty.

Her brother-in-law Harold (Rick O’Daniel-Munger), is all about certainty — but all of his certainties are grounded in doubts and suspicions. He’s suspicious about Edith’s homeless handyman Bing (Ben Goldman), a cheery, frequently-befuddled vet with a metal plate in his head. That plate is the legacy of a combat injury suffered in the Middle East. He’s suspicious about Chelsea (Jennifer Riddle), a young college student whose deep friendship with Edith started a couple of years ago when Chelsea was volunteering in a faith-based service program. He’s especially suspicious of Chelsea’s new beau, Nick (Francis Whitaker), a disenchanted soldier and college student. And given half a chance and a Phillips screwdriver, you can rest assured that Harold will repair Edith’s lock.

For Harold, anything he can’t control is scary — and it turns out he can’t control much. As the play opens, his mission is to have Edith sign a document leaving her house to the church where both of them worship. But just a few days ago, a poorly designed church activity went awry in a way that crystallized Edith’s long-standing doubts about her faith — and suddenly her plans for the house are in flux.

Meanwhile, Edith is preparing for an upcoming flower show. She’s a grower of championship roses with an enormous collection of championship blue ribbons from prestigious competitions — and since she’s planning to move into senior citizen housing, this will be her last competition. She wants to retire a winner — and what’s more, she wants to retire a winner in the highly demanding “Stages of Bloom” category, which requires exhibiting roses on three stems — one still in the bud stage, one in full exhibition bloom, and one fully open flower.

In a world where irony and its rhetorical accomplices — sarcasm and the like — are ubiquitous in storytelling, Fentress gives her characters a rare gift: the opportunity to reveal their truths without filters. That she accomplishes that with only a few traces of sentimentality is a tribute both to the quality of the writing and the exquisitely crafted performances Director Matt Orme has drawn from this cast. And all the action plays out in a fine setting, Edith’s front porch (tech direction and scenic design are by Bob Bush; lighting by Gerald Kean; costumes by Hannah Greene).

In terms of individual performances, Scalf imbues Edith with a fiery grace that is delightful to watch — and seems very like some healthy and engaged nonagenerians I’ve met. Bing’s starts and stutters are finely calibrated in Goldman’s portrayal — and if his eager-to-please geniality is a bit too magical, it’s a fine magic. The most emotionally complex character here is Harold — and at a key moment O’Daniel-Munger reveals his story in a finely-played scene.

But it’s really in the depictions of relationships that this play shines. And though Riddle and Scalf develop some fine moments as the pair gets ready for the rose competition, it’s the unlikely chemistry that develops between Scalf’s Edith and Whitaker’s Nick that yields some of play’s finest rewards. These characters, separated in age by some 70 years, are both grappling with new uncertainties. Edith has doubts about her faith. Nick, traumatized by events in a war zone, confronts doubts about his role as soldier.

As they reveal their stories to one another, a bond emerges, and through helping one another they each discover a new and freeing solace.

In the end, even Harold blooms — and not because of a screwdriver. All through the play Harold is petrified by the prospect of reading the lesson at Sunday’s church service. The scheduled text comes from Isaiah 55:12 — “You will go out in joy and be led forth in peace; the mountains and hills will burst into song before you, and all the trees of the field will clap their hands.”

It’s a text that surfaces more than once during the play, tapping into themes of nature, celebration and hope that infuse this quietly moving play. And in the end, something that was thought lost does burst into song. A clapping of hands is definitely called for.