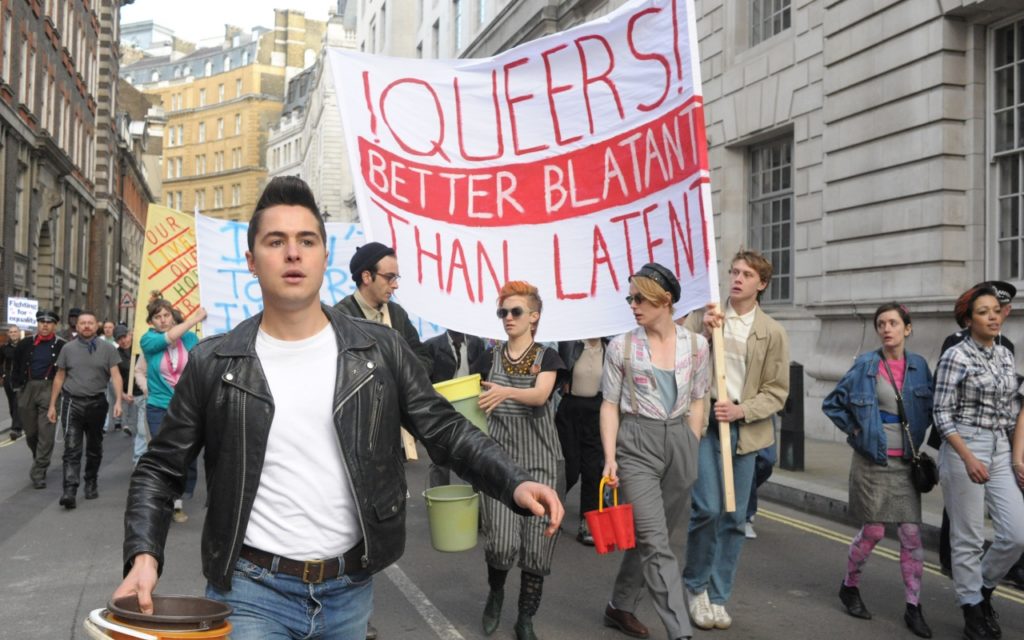 Still from the film "Pride."

Louisville Socialists Movie Night: ‘Pride’
Kaiju
Free  |  8:30-10:30 p.m.
Join Louisville Socialists for a special screening of “Pride.” The film is based on true events in Britain under Prime Minister Margaret Thatcher, as an unlikely alliance is formed between gay activists and coal miners on strike. The film “demonstrates solidarity in the pursuit of common struggle,” the event’s organizers said. The screening should, at the very least, lead to some interesting conversations.

The Story Avenue Butchertown Mural Celebration
1200 Story Ave.
Free  |  1-10 p.m.
Celebrate the creation of an “epic 5,000 square foot mural celebrating both historical and contemporary aspects of the Butchertown Neighborhood.” At this party you can see the “city’s largest, most colorfully detailed mural,” up close and personal, talk to the artists working on the project (Aron Conaway and Tara Remington) and enjoy delicious, free pizza courtesy of Butchertown Pizza Hall. The celebration will start at the mural and move to Butchertown Pizza Hall at 3 p.m. for the free pizza party/grand opening of this new pizzeria. The mural was commissioned by JBS Swift Co. in association with the Louisville Visual Art and the Center for Neighborhoods’ P.A.I.N.T. Program.

KRM World Refugee Day Celebration
Tyler Park
Free  |  11 a.m.-1 p.m.
On World Refugee Day, the UN Refugee Agency asks that everyone “commemorates the strength, courage and resilience of millions of refugees.” And you can do just that by joining the Kentucky Refugee Ministries as it celebrates the “students, staff, co-sponsors, volunteers, and community partners,” dedicated to KRM’s mission of “serving the world’s displaced people.” There will be food (feel free to bring a potluck dish), live music and soccer, dancing lessons and face painting for the kids.

We Are Louisville — Community Event
Zanzabar
Donations  |  6-10 p.m.
Join Define American, a nonprofit that “uses the power of story” to “shift the conversation about immigrants, identity, and citizenship in a changing America,” as it hosts this community event in an effort to welcome immigrants and refugees. There will be food and drink, and all money raised will go toward the “collective efforts of local immigrant and refugee organizations.”

Scientific Proofs: Space. Pizza.
Mellow Mushroom (Shelbyville Road)
Free  |  6:30-7:30 p.m.
Scientific Proofs is a monthly “gathering for grownups who like to geek out on science,” and, in preparation for the coming total solar eclipse, this week’s topic of discussion is outerspace. Get a crash course in eclipse-science from SpaceTango representative Twyman Clements, who will go in-depth on current topics of the space industry.

Twilight Thursdays
Churchill Downs
$3  |  5-8 p.m.
Win some big bucks (if you’re lucky) at the track with live, nighttime thoroughbred racing. There will also be live music, local food trucks, betting tips from resident handicappers and, best of all, $1 beers! The first race is scheduled to go off at 5 p.m., with the last race at 8:23 p.m.

Early Screening of ‘From The Ashes’
First Unitarian Church
Free (RSVP encouraged)  |  7-9 p.m.
Attend an advanced screening of “From the Ashes,” a documentary that “goes beyond the rhetoric of the ‘war on coal’” and “takes a compelling and often heartbreaking look at what’s at stake for our economy, health, and climate.”