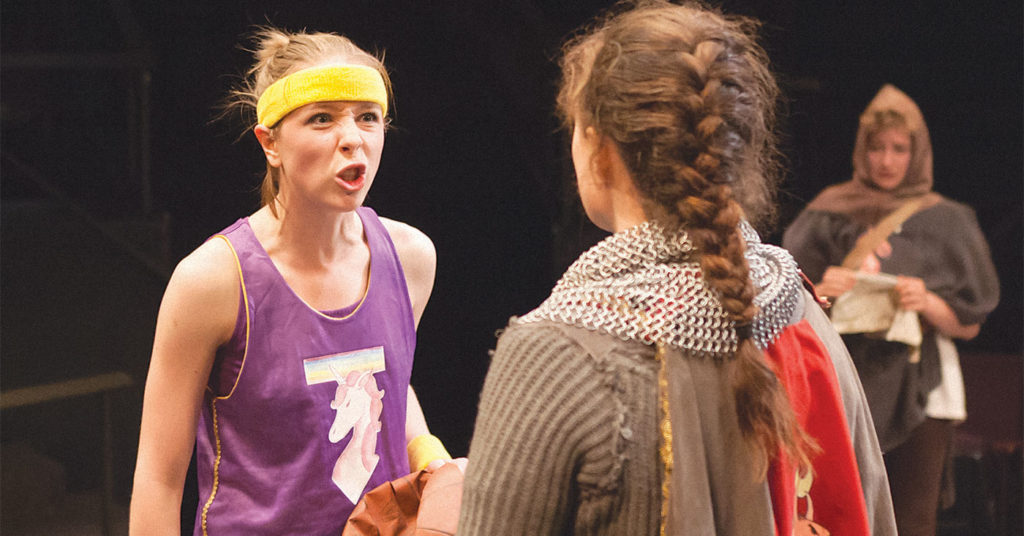 Regan Moro, Grace Palmer and Jenn Geiger in 'The Fateful Fall of the Art or the Sport of Jousting.'Photo by Bill Brymer

For over a decade, Actors Theatre of Louisville has produced the New Voices Young Playwrights Festival. Each fall, submissions are invited from students in grades six through 12 who live in Kentucky or Indiana’s 812 area code. The plays go through a blind review process: No information about the identity, age, gender or school is included. Only one submission per playwright accepted.

The number of submissions is staggering: This year’s call elicited almost 900 scripts.

That number alone — the fact that there are 900 young folks in this region who have applied their imaginations to crafting plays, and then had the courage and pluck to go through the rigmarole of submitting them for review — is cause for celebration.

Likewise, the community should take pride in the fact that dozens of theater professionals — both from the ATL staff, the region’s arts and education community, and the ATL Professional Training Company — come together to bring the plays to the stage with impressive production values, strong casts and committed performances. The play selection process must be formidable. ATL’s Lexy Leuszler is listed as the Festival’s literary manager, and this year’s program lists some three dozen folks on the New Voices Play Selection Committee (and perhaps twice as many on the Festival’s Teacher Advisory Committee).

“No Hablo Espanol,” by Betsy Anne Huggins (Fairdale High School), directed by Betsy Anne Huggins, takes an acerbic look at the politics of cultural identity (and cultural appropriation) in the classroom context. Carmen (Kathiamarice Lopez), a U.S.-born Latina who knows not a shred of Spanish, faces an assignment that requires her to deliver a presentation in the language of her parents. Based on her lived experience, she knows that she is as much a Latina as anyone in her class — but a gang of classic bullies, led by Mariana (Alisha Espinosa), thinks differently — and they’re prepared to police their cultural boundaries with all the tools at their disposal. But then another classmate, Rabia (Laakan McHardy), comes to Carmen’s rescue, and a surprise plot twist flips the narrative, and the script closes with a burst of reconciliation and hope.

In “Not Another Cliché,” by Jordan Maloyed (Bullitt East High School), directed by Victoria Masteller, a novelist named Adam (Andrew Cutler) finds himself with a creative crisis. He has already established his protagonist, Sara (Laakan McHardy), as a fiercely independent warrior — but his publisher thinks the novels will be more successful if Sara finds a male love interest. Sara is having none of it — and when Adam writes a gorgeously-handsome knight (Jacob Sabinsky) into the story, the entire enterprise seems destined to fail — until a fresh new option emerges in the form of a cutely-repulsive Beast (Jenn Geiger).

“Friday,” by Hannah Schmidt (Fern Creek High School), directed by Jane B. Jones, traces the emotional trajectory of a brief high school romance from first blush through climactic fireworks, all the way to the bitter end (and beyond). Schmidt cleverly squeezes all the emotional highs and lows into a narrative that plays out through text messages — and those texts (and related information) delivered through an ancient theatrical device: a modern-day version of a classical Greek chorus.

“(bar)ri(e)rs,” by Carson Hardee (Lafayette High School in Lexington), and directed by Sammy Zeisel, is a poignant look at impediments of various kinds. Two young men, Tyler (Daniel Arthur Johnson) and Mark (Kevin Kantor), now on the cusp of graduating from high school, were once the closest of friends. Then one day, years ago, the relationship abruptly ended. Tyler — who became deaf around the time Mark abandoned him — thinks his deafness was the cause. But as we learn over the course of the play, Mark had his own disabling demons — including a love for Tyler that he feared to express.

In “The Fateful Fall of the Art or the Sport of Jousting,” playwright Parker Henderson (Youth Performing Arts School) and director Katie Foggiano find a rich vein of humor in a disruptive tale of alternative history. As the story opens, Sir George (Grace Palmer) and Squire (Jenn Geiger) are impatiently waiting for the arrival of Sir William (Regan Moro), who is late for the morning joust. When Sir William arrives, he brings with him an odd, spherical object that bounces when thrown the floor. This object, it turns out, is a basKET ball (accent on the KET), and as far as Sir William is concerned, bouncing said ball and finding ways to insert it through a hoop offers far better sport than an old-fashioned joust. The script and action give the performers plenty of room for comic antics — and they take full advantage in this fun sketch.

The Festival concluded with a comic apocalypse by Aiden Phillips (New Albany High School). “Prehistoric Problems,” directed by Lila Rachel Becker, is the tale of a young T-Rex named Trevorsaurus (Alice Wu), whose parents are a pair of Stegosauri named Stevosaurus (Elijah Jones) and Adamasaurus (Carter Caldwell). When Trevorsaurus comes under the Stegophobic influence of Geraldacyte (Sam Kotansky) and the seemingly crazy Lindosaurus (Regan Moro) starts running around proclaiming that an incoming meteor is about to end all life on Earth, things get pretty crazy — right up until the end.