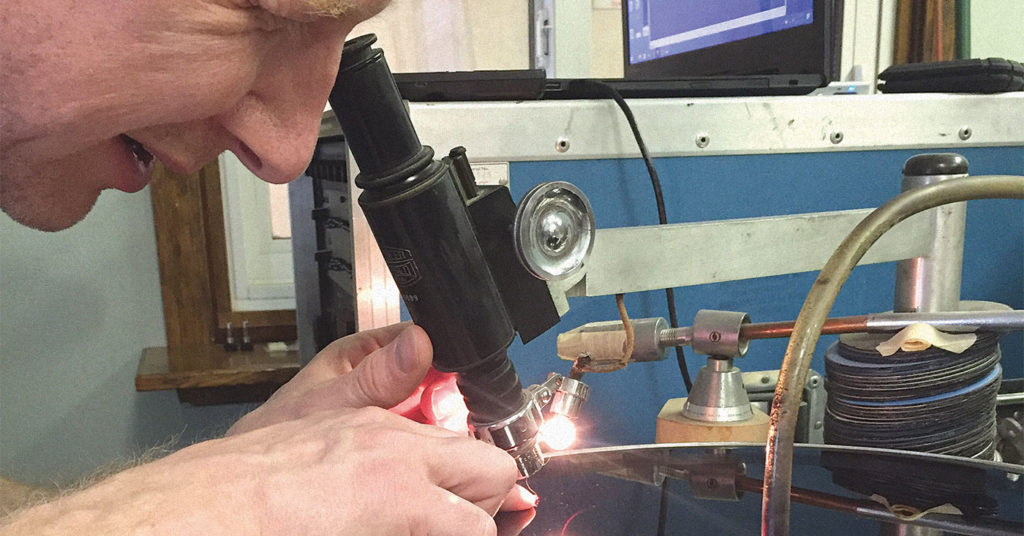 When Jeremy Perry, frontman of the The Deloreans, wasn’t happy with the sound quality on his band’s vinyl that was pressed at Palomino Records in 2010, he stopped by the small plant in Shepherdsville, just south of Louisville. There was something off with the recording, so he decided to reach out to owner Tom Dillander — and was surprised to leave with a job.

“Tom was a cool-ass guy,” said Perry, who has been mastering engineer at Palomino for seven years. “He probably slept two or three hours a night trying to make all these indie band guys happy by staying up as long as he could and pressing records until he would just drop.”

Palomino, which has pressed records for Louisville bands such as Wax Fang and Black Birds of Paradise, has a rich and tragic history. It opened in 1992 as a record distributor for square dance albums, before the company purchased a vinyl press to make more of the same in 2003. When the digital music boom hit, Palomino was squeezed out of the square-dance market. But then, new interest in vinyl records took Palomino in another direction — pressing indie rock albums. Tragedy struck in 2013: Dillander died during a freak accident involving a boiler, but Palomino has continued to be deeply important to the local music scene.

Tom and his wife, owner Pam Dillander, were part of square-dancing culture, a dance style that requires instrumental versions of popular tracks, for a caller —  an emcee — who provides dancers with cues for dance steps. After college, Tom Dillander had landed a mid-level corporate job, but he found it lacking. So, Dillander left to start a career working with square dancing. Getting those instrumental tracks for callers wasn’t always easy. Prior to the arrival of affordable software and file sharing, someone had to cut the track in a studio, a time-consuming and expensive process that Dillander hoped to tap into.

“He tried various ways to make money, and eventually he found another way to hustle, going back to square-dance music,” said Perry. “In 1980-something, the midi version, or karaoke version, wasn’t just out there to download on the internet, so someone had to create and, obviously, that didn’t happen very fast. He started going down to Nashville trying to gather musicians to record songs. And he’d own the recording. That was a way for him to make money.”

In 2003, Dillander happened upon Rocky Mountain Vinyl, a single-press operation looking to offload its gear. For Dillander, pressing his own records was an opportunity to not only own the recordings for his square-dance tracks, but to cut out any middleman involved in the process. Unfortunately, his timing coincided with the burgeoning MP3 and peer-to-peer file sharing systems made popular by Napster.

“People in square dancing — even though they traditionally danced to records — basically were starting to see that they could save some money with MP3s,” Perry said. “I think if that exact recipe had happened in the early-90s, he would have made a killing.”

But, his fortune changed once again when vinyl became popular with a new generation, and soon, Palomino turned in another direction. A mid-scale pressing plant in Cleveland, Gotta Groove Records had more business than they could handle because of the vinyl revival, and heard talk that there was a press in Louisville that wasn’t currently operating.

Palomino stepped in to help with Gotta Groove’s overflow, before branching out to the local DIY community and beyond. From that point on, business was booming.

Which is how Perry got involved.

“I didn’t know anything about vinyl mastering at the time, but I’d produced all the Deloreans records and produced some friends’ bands, so I knew enough about mixing and frequencies and shit like this,” Perry said.

The lathe at Palomino Records is from the ‘50s, as is the majority of his engineering gear. The press is about the same age. It was a malfunctioning boiler that ended in tragedy for Dillander in 2013.

“There are giant cavities called hand holds,” said Perry. “It’s the only spot on the boiler where you can get inside of it to explore it, and one of those spots blew. Steam filled the room and it was probably like the surface of Mercury. He went to the ER immediately and lived for like a day. It was really shocking.”

The future of Palomino

Palomino has endured, continuing its day-to-day operations with Perry, Pam and her son Travis Dillander, and Dashiell Moss, who is the bassist for Black Birds of Paradise.

Perry has updated some of the equipment, focusing on programs and tools designed to flatten out the sound. The mastering process is arduous and specific to the medium — if the grooves are too close together, which might occur for long records, the sound is impacted.

“I think of it as thousands and thousands of turnstiles just to get into a concert,” Perry said. “With a mix, when it’s well balanced, you’ve got all these millions of people, going in smoothly. But when you’ve got too many people going in this side or that side, that’s when you get a bottleneck. You’ve got to know, as an audio engineer, how to equal all that out.”

Once Perry has used the Scully Lathe, a manual machine for cutting vinyl, the master is sent off to a company in New Jersey, which creates an electro-formed plate, a negative mold to press the records off of. Once that is returned, Moss physically presses the vinyl, a process not unlike a large and very hot waffle iron.

From there, the records are sent out sleeveless, save for the label on the record itself. Since opening, Palomino has worked with local labels such as Sophomore Lounge and Noise Pollution, and with national acts including Daughn Gibson. Pointing to a map, Perry said Palomino has worked with someone in every country, except anywhere in Africa. Although the company’s reach is wide, the operation remains extremely small.

“As far as pressing plants go, they don’t get smaller than we do,” Perry said.

I found this out when I visited. Other than the front door, which was recently damaged in a car accident, there is little to identify the building at all, and nothing to suggest what goes on inside. They carry on in Tom Dillander’s spirit, keeping it small, DIY and unassuming. You’d never know it’s there, but if you’re a musician, you’re better off for it.

“If you pass a giant giraffe you’ve gone a bit too far,” Perry told me when I was on my way. •