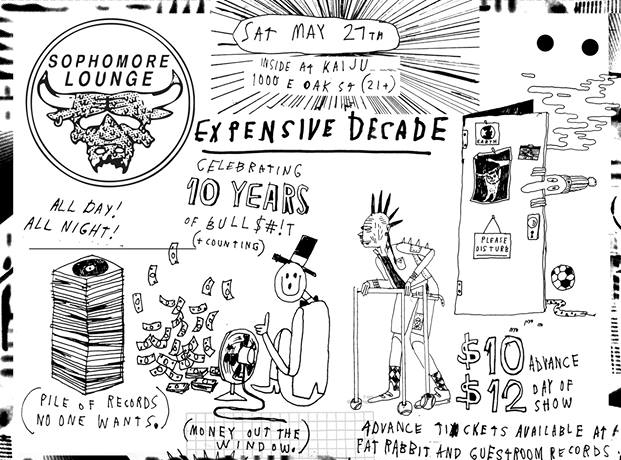 Making it as a record label is no small feat, but Sophomore Lounge has beaten the odds by putting out incredibly compelling music. The brainchild of Ryan Davis, the label not only has released albums by Bonnie “Prince” Billy, Anwar Sadat, State Champion and Tropical Trash, but it has hosted the annual Cropped Out festival. The festival returns in September with The Fall and Circle X headlining. But first, the label is celebrating its 10-year anniversary with a blowout bash Saturday, May 27 at Kaiju, featuring virtually every band ever associated with the label.

LEO: Why run a record label, and why keep at it all these years?
Ryan Davis: It initially got started because me and several of my friends at the time were starting to write songs. We’d always been in bands, but we’d started to get our voice. There was something in common in what we were doing. None of us knew how to get on a label, so we just did our own thing. We didn’t have any distribution or anything. It was just going on tour. Once it became something that kind of solidified, we looked into doing vinyl, and we just kept doing it.

In your experience, do people still want a physical copy of a record?
I haven’t seen a decline in that so much. The limited micro-perception that I have: Any new record that I have in any new band, it always sells out. Maybe it doesn’t sell out for a few years. I work some days a week at Fat Rabbit, and people are always buying new stuff. Vinyl is, as a visual person, is that process of getting the layout, and holding that, and having to flip it.

What are the stresses inherent to running a label? How do you tackle those obstacles?
I’ve never put myself in too deep a hole. I know my limits. I know when something won’t sell much, so I get a smaller run. I never put more into that [than] is going to threaten my livelihood.

Do you think that you’ve cultivated an aesthetic with the label?
Yes and no. It is a label that doesn’t subscribe to any one sound. Sometimes people submit things that aren’t a good feel, but it’s hard to articulate. I consider it an art label. A lot of the labels that I grew up with, like Drag City and Thrill Jockey, labels, did a little bit of everything. I never really felt like I had to keep it one certain thing, so it’s kind of danced around.

What’s the coolest thing you’ve done as a label dude, and why?
The coolest experience is probably this thing next week, where it’s kind of everybody in the same place hanging out. People have called it a 10-year reunion, which it’s not — I’ve never stopped doing this label. Also, when [I] put out a record by my own band, it’s especially fun. I don’t treat it any different. For my bands, I have a little bit more control over it and I like to see it from start to finish.