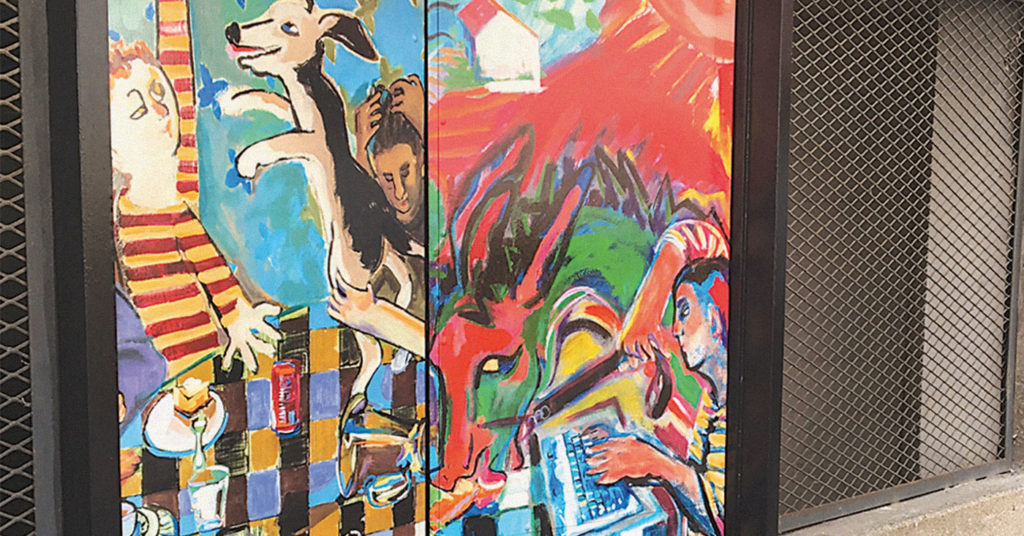 What do you think of when you hear the phrase “art doors”? I admit I first thought of mixed-media art installations made with doors. OK, that’s one way. But I like the Louisville Downtown Partnership’s concept much better: an outdoor gallery comprised of art on metal doors in alleys.

The Partnership recently announced the completion of 11 doors in the alley behind the Post Office on Fourth Street Live!, between Third and Fourth streets and near the Starks Building. There are five more doors at Market and First streets, Broadway and Seventh Street and Seventh and Jefferson streets.

I’m a big fan of public art, and these 16 art doors give a taste of what’s to come. There are more than 300 available doors in the downtown district bordered by River Road to Broadway and 12th Street to Baxter Avenue. There is an interactive online map on the website.

Among the artists who have art doors on display are Joyce Garner and Angie Reed Garner of garner narrative contemporary fine art, Jinn Bug, Andy Perez and Chris Chappell. Their work was sponsored by either Riverside Parking or Fourth Street Live!, the two current patrons of Alley Gallery.

More artists are needed (a few attended the press conference and expressed interest in the project).

“We are asking for art from local artists and targeting our placement for now in downtown and adjacent areas [such as] NuLu, etc.,” said Ken Herndon, the Partnership’s special projects coordinator. Its website has made the call for art easy. And, I must say, good for the artists who get paid ($300). They do not have to give up the original artwork (the money is payment for image use only), and it can be in two-dimensional or three-dimensional media.

“I look forward to 300 doors of art,” said U.S. Rep. John Yarmuth, a Louisville Democrat and LEO’s founder, during the a news conference in one of the alleys. “We might have to have traffic lights in the alleys.”

Mayor Greg Fischer was equally enthusiastic. “We’ve got to give [the doors] a little soul, a little Louisville originality,” he said. “That’s what this project represents, a fun and whimsical way to showcase our fantastic artists and for people to have fun in our city.”

There’s also a call for sponsors located within the Central Business District (Marriott has expressed an interest). The Partnership has made this easy, too. To see the project’s wide range of art, prospective sponsors view images in the online catalog. Sponsorship is $645 per single door or $1,200 per double door.

My favorite new word is from Metro Council District 4 Councilwoman Barbara Sexton Smith: “artism.” Based on Fischer’s “bourbonism,” artism is what Louisville has in abundance. That and doors.