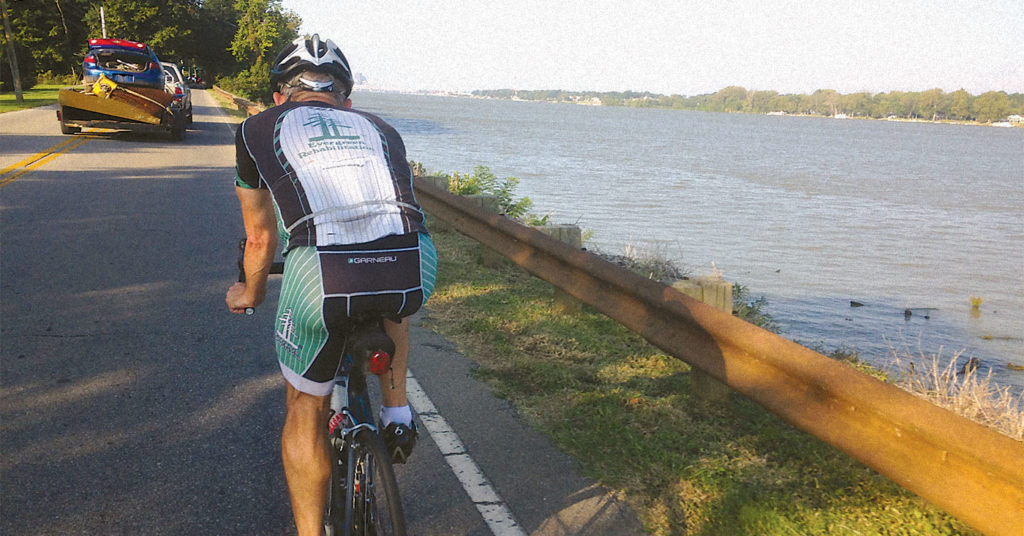 A cyclist navigating River Road, as a truck passesPhoto by Tom Moran

I’ve heard it before from more than a few people. “I can’t stand it when you cyclists ride on River Road!” Then, a sentence or two later: “It sure is a pretty road. I love to drive it.”

The River Road Corridor, designated a Kentucky State Scenic Byway in 1994, is a seven-mile stretch offering the best views of the Ohio River within Jefferson County. Cyclists have enjoyed it since cycling first became popular in the 1890s. To this day it can be enjoyable and exciting, but, at times, daunting or terrifying, depending on time of day, week, or if you are alone or in a group.

Finally, it is getting a little attention, which could make it safer for everyone. More on that later, but first, a little history.

In my previous LEO story “Biking Bridges,” I discussed how the new Lewis and Clark Bridge connecting Prospect with Utica, Indiana, had created new opportunities for cyclists, including a bridge-to-bridge loop of about 30 miles. It is evident that opening this bridge is attracting more cyclists and motorists to River Road.

It is also a major thoroughfare. Travelers include East End commuters, heavy trucks hauling sand or metal between Zorn and Frankfort avenues, people hauling boats, lawn care trucks, farm trucks and cyclists (commuter and recreational). Many people come to this road for its beauty, or to access the river, and some use it for a shortcut. Here lies the conflict. In the past five years, 229 collisions have been reported along this stretch. Most of the road has no shoulder — no room for error.

A group, Citizens For A Safer River Road, wants to change that by improving existing shoulders according to guidelines accepted by the American Association of state Highway and Transportation Officials, Federal Highway Administration, Kentucky Transportation Cabinet and Metro Louisville.

The road now is an average of 24 feet, 8 inches, for two lanes of about 12 feet each. The proposal would add 2 feet to serve as a shoulder. With this addition and reducing the lane widths to the national standard, 10 feet, that would leave 4 feet, 4 inches that CSRR says “will increase efficiency and provide a recovery zone for motorists while allowing enough pavement to be safely navigated by other users.”

Now, this should not be confused with a bike lane, which has a minimum width of 5 feet and often includes a buffer (and shoulder in many cases). This is not a bike lane, but it is an improvement. The CSRRs proposal is a step in the right direction.

Estimated cost for the project is $1.9 million, and the group has indicated the money would be raised completely from private donations. Two public meetings already have been held on the proposal.

Kentucky law states that cyclists shall:

“Be granted all the rights and be subject to all the duties” applicable to drivers of any vehicle. A bicycle is a vehicle, not a toy, and as such, must obey the traffic rules and regulations pertaining to all highway users. Motorists should regard bicyclists as they would any other vehicle.

Over the last 25 years, I have been harassed by motorists numerous times. It is shameful to think there are people on our roads bullying people with their 3,500-pound vehicles, but they have. I am not alone: Ask any cyclist about riding on River Road.

Yet, despite this, I’m optimistic.

Roads are made for people, no matter whether they are on two wheels or four, and River Road is no different. We need to end the stigma of bicycles on this scenic stretch.

Put yourself in the cyclist’s shoes. It’s not easy, but most cyclists are willing to help you pass safely if it’s safe for them. Realize there are dangers you cannot see. Road debris, glass, potholes or drivers passing too close may keep a cyclist from hugging the edge of the road. Give us 3 feet at a reasonable speed, and please — don’t honk, because that scares the bejesus out of us.

It’s a beautiful road that holds great promise for the future. We can all share it if we are not distracted, in a hurry and angry and if we are more conscious of one another.

• Avoid riding alone unless necessary. Riding partners experienced with routes in and around this stretch can help show you the way.

• Use front and rear lights, even in daylight.

• Ride with a GoPro camera as a deterrent and witness in case of a close call.

• Busy time of day? Take an alternate route after crossing the bridge into Prospect by turning on Lime Kiln (which is .75 miles away), Glenview (just a little farther), Blankenbaker, Indian Hills or Mockingbird lane to get you up and away from a busy River Road and to your destination sooner and safer.