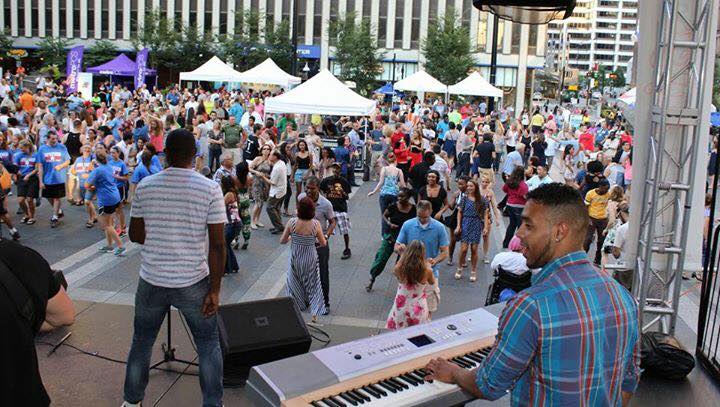 Most years, the Sunday after Derby is citywide hangover day. Not this year. You can shake off your post-Derby malaise with Cinco de Mayo Fiesta.

In conjunction with Derby Festival, the Fourth Street Live! event is Louisville’s official Cinco de Mayo celebration. It is a delayed fiesta, taking place May 7, because May 5 falls on Oaks Day this year.

In a time when the intolerant powers are unfairly targeting the Latino community, this is a chance to come together and enjoy Mexican culture. “When people can come together to celebrate and have a good time with one another, it knocks down walls,” said comedian Alex Reymundo, who will be onstage hosting Sunday’s festivities. “And when you break down those walls, it opens up the door for inclusion. Anytime you go somewhere and have a good time, you’re more apt to open up and let it be a part of you. That is the American fabric, and we are all a part of that fabric.”

Sunday’s celebration shows that Mexicans and Mexican-Americans are not only welcome in our city, but celebrated members of the community, he said. “I have been a part of this Louisville community for 20 years,” Reymundo said. “And, although I’m secure in who I am, it’s nice to see the community having an opportunity to embrace the Latino culture.”

Cinco de Mayo is a Mexican holiday commemorating Mexico’s unlikely defeat of France in the Battle of Puebla on May 5, 1862. And yet, the holiday is widely acknowledged to be far more popular in the United States than it is in Mexico.

“I think it’s Americans looking for a reason to drink, which I am totally OK with,” he joked. Reymundo also owns a local tequila company called Number Juan. “I think it’s important to anyone of Mexican heritage, or really even any Latino heritage, because it’s a day you can celebrate being Latino. And if you’re not Latino, you can come to understand this culture and celebrate it like we do the Irish on St. Patrick’s Day.”

Ben Ruiz, founder of the mayor’s Louisville Latino Council, has a slightly different take on why Americans get so into the holiday. “Americans fought side by side with their friends in Mexico during the Battle of Puebla,” he said. ”They won, even though they were outnumbered seven to one by the French Legion who had never been defeated in a battle like that.”

A highlight of the festivities will be when 12 college students of Hispanic descent are awarded $1,000 scholarships each, provided by the Louisville Latino Council. They will be presented onstage by Mayor Fisher, Ruiz and Reymundo. These accomplished students come from seven local universities based on grade point average and financial need.

The event is also a celebration of the elegant beauty that is Mexican art and culture — including salsa and flamenco dancing and mariachi performances.

“Art is what comes from a culture when there is nothing left to be said. Like in times of trouble, times of war, that’s when the best art is made,” Reymundo said. “In the way that a person is tested by strife, so are a people. And if you look at Mexico, it has a dark, troublesome, corrupt history. And yet all of our art is filled with bright colors and the music is filled with joy. Because that’s the only way they could get a glimpse happiness, was to make it. And to me that’s why the art is such a part of this celebration — you learn so much about what makes our culture through our art.”

The event starts at 2 p.m. with Mariachi Band Zelaya. Throughout the day various performers will take the stage including: Mexico Lindo Folklorico!, Kentucky Salsa AllStars and more. All that culminates when local Latin fusion band Appalatin takes the stage at 7:30 p.m.