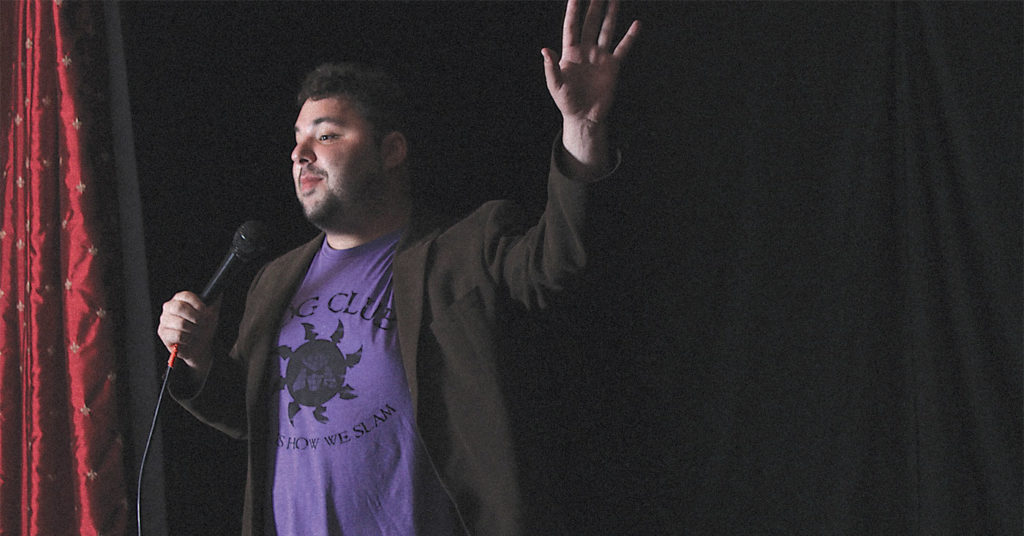 When comedians go to New York, they either flourish in the competitive hustle, or they wither from the stress of the tough crowds and struggle for stage time. When local comedian Raanan Hershberg moved there last year, everyone knew he was ready — except for him. “I found out that I am funny, but it doesn’t matter,” he said. Hershberg routinely opens for Kathleen Madigan around the country. His first album, Self-Helpless, climbed to No. 2 on the iTunes Comedy Charts last year. And he has been featured on “Laughs” on FOX and Sirius XM. This week, he returns home for a special headlining performance at The Bards Town.

LEO: Has being in New York altered your material in any way?
Raanan Hershberg: … Yes and no. You get really short sets in New York. If you’re on a booked show, you’ll get 10 minutes, which any comic should be good with. But if you’re on an open-mic show you’ll only get two minutes. A two-minute open-mic definitely changes the way you write … [It] trains you to go micro, instead of macro. After being in New York you learn how to get to the point a lot faster, and you find out you really can do a lot with two minutes.

What else have you’ve learned there?
I thought I was going to move to New York and find out I wasn’t funny. I found out that I am funny, but it doesn’t matter. A lot of people in New York are funny — it’s no big deal. That’s the pill you have to swallow. Realizing that being funny really doesn’t matter.

It must be nice to not have to have another job and still pay the bills in New York City, so that, when you’re in town, you can focus solely on the work.
Yeah, I’m on the road a lot. And, usually a couple of weekends a month, I’m with Kathleen [Madigan]. That’s really what’s keeping me afloat right now. It’s OK to work another job. I’m sure I’ll have to again at some point. But there is something to be said for not doing anything all day and then performing at night. Comedy is kind of like — laziness is part of the hard work. I know that sounds like an excuse, and it probably is, but there is some truth to that … But who knows how long that lasts? Because I mean no one in New York makes a living doing comedy. I saw Louis C.K. working a coffee cart last week.

Comedian Pete Holmes’ new show, ‘Crashing,’ is about being an up-and-coming comic in New York. Is it accurate?
Yeah, it’s pretty accurate. I like it a lot. I’m interested to see if he’s going to make it by the end of the series. I feel like everyone on that show is either way too nice to him, or way too mean … I get texts saying: ‘Artie Lange is playing you on that show.’ Because for some reason I come to people’s minds when they see Artie Lange [Laughs]. But what that really means is, I’m playing Artie Lange. Because a lot more people know who Artie Lange is, than know who I am.

What has been your most New York moment?
One time I was in the subway with this other comedian, and we were talking about how hard it is to get booked in New York. Across the subway, as we were talking, there was this guy singing the most beautiful opera I’ve ever heard. It was so beautiful, it should have been at Carnegie Hall, ya know? I remember looking over and thinking: ‘Man, none of us are going to make it. How are my dick jokes going to take me to the top, when Pavarotti is singing in the subway for change?’ •