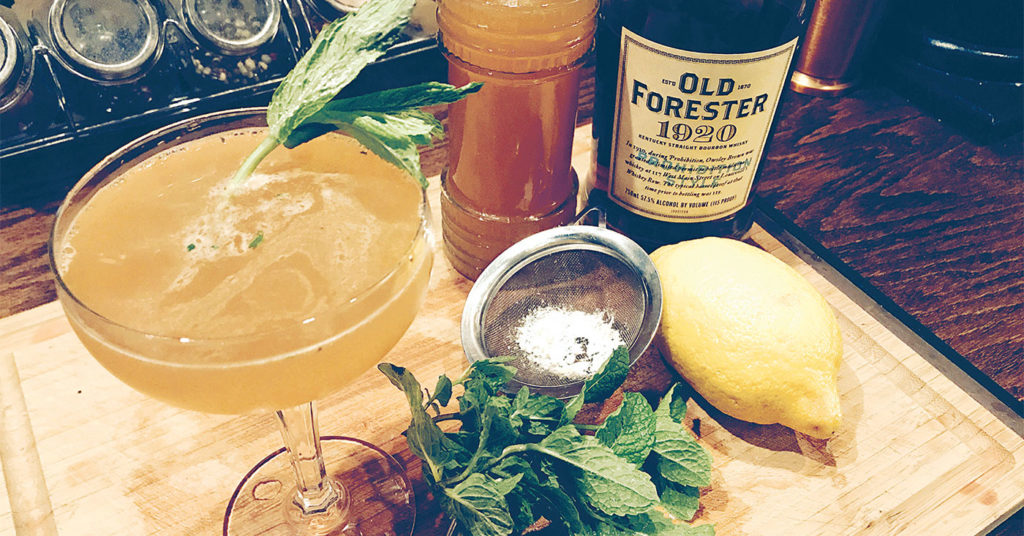 A beautifully-crafted Derby julep, made by Emily Hornback, bar manager extraordinaire at 211 Clover Lane Restaurant.....And a pairing of wasabi peas

On the first Saturday in May, two distinctive fixtures of Louisville’s skyline converge for America’s oldest continuously held sporting event. The Twin Spires of historic Churchill Downs and the 64-foot tall Old Forester bourbon bottle (once a water tank) hovering over the headquarters of Brown-Forman Corporation, both preside over the Kentucky Derby.

Old Forester is used in the mint juleps served at the track. Its sister bourbon, Woodford Reserve, is both the Official Bourbon of the Kentucky Derby and the whiskey used in $1,000 mint juleps used as fundraisers this year for the Kentucky Derby Museum. The former is served in the familiar, colorfully-decorated julep glasses. A jeweler-designed julep cup featuring gold plating is the vessel for the latter. (Not served at the track, but buyers are given a special recipe. Go to woodfordreservemintjulep.com for details.)

According to the official web site for the race, 120,000 juleps will be served on Oaks and Derby days. They will require 10,000 bottles of premixed Old Forester Mint Julep Ready-to-Serve Cocktail, 100 pounds of just-harvested mint, and 6,000 pounds of shaved ice. Surely there’s a Guinness record in there somewhere. How many sporting events have an official cocktail?

Brown-Forman’s master distiller, Chris Morris summed up the history of the $1,000 juleps in answer to an email query:

“Now in its 12th year the Woodford Reserve $1000 Mint Julep program continues to come up with creative ways to raise money for equine associated charities. I find this year’s concept interesting because it reaches back in time to when Meriwether Lewis Clark created the Kentucky Derby using the Epsom Derby as his inspiration. Therefore this year’s julep includes the classic flavors of England among its ingredients. It is a great tasting combination of the flavors of Kentucky and England in one drink, in one cup.”

The Kentucky and English flavors Morris refers to include bourbon, of course, plus Pimm’s No. 1 Cup and Earl Grey tea. Even if you can’t afford one of the 90 $1,000 julep cups (or one of the 15 gold-plated sterling silver $2,500 cups), you can mix the recipe to sip at home while watching the race.

Rub mint around the julep cup to release the essential oils. Add remaining ingredients and top with crushed ice. Churn ingredients with a bar spoon distributing the flavor. Top with additional crushed ice. Garnish with a bundle of baby’s breath and mint. Sprinkle with dehydrated edible blue cornflowers.

Not one of the select 170,000 or so who will be at the track May 6? You have options. One is to head to 211 Clover Lane Restaurant in St. Matthews for one of bar manager extraordinaire Emily Hornback’s beautifully crafted Derby Juleps. She uses two ounces of Old Forester 1920 Prohibition Style Bourbon, half an ounce of Reàl Peach Syrup, half an ounce of mint shrub made from champagne vinegar, fresh mint, and a splash of good ole H2O. All is shaken over ice and strained into a chilled coupe glass. Fresh mint and a slice of peach are the garnishes.

Sip it after dinner with one of the restaurant’s signature desserts, a silky smooth chocolate pot a crème. (Caution: Old Forester 1920 weighs in at 115 proof. Sip carefully.)

Of course there is also the option of making your own julep at home. You can buy a bottle of the Old Forester julep pre-mix, or use the classic recipe from Kentucky Bourbon Hall of Famer Joy Perrine’s “The Kentucky Bourbon Cocktail Book.” (Full disclosure, I am the co-author.) Feel free to transfer to a silver julep cup.

Into a large mixing glass pour simple syrup, add mint, and muddle well. Add bourbon and water. Fill with crushed ice or small ice cubes and shake. Garnish with a large sprig of mint and add a straw.

Finally, here’s a fascinating tip for a nibble to pair with juleps at your Derby party — wasabi peas. I am not making this up. Former Brown-Forman master taster and founder of the Bourbon Women Association, Peggy Noe Stevens passed that along to me. The sweet, minty bourbon drink and the fiery hot wasabi peas are terrific together. But do get the real snacks. Some so-called wasabi peas are coated with horseradish. Paul’s Fruit Market’s are made will real wasabi mustard. And you can pick up your fresh mint there, too.