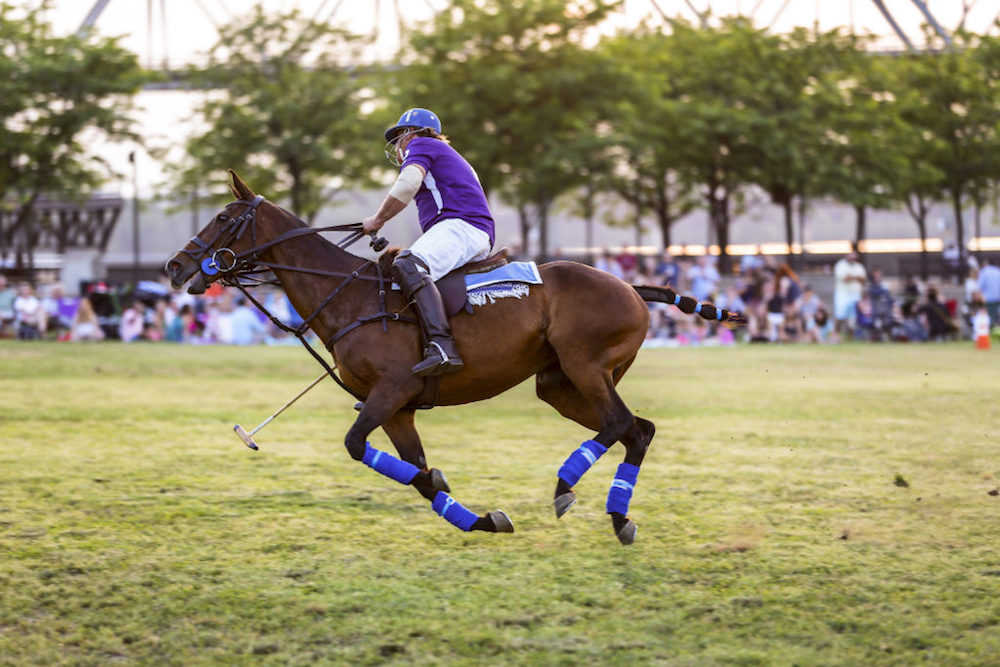 The Louisville Polo Club, the oldest polo club in Kentucky, hosted Twilight Polo this past Thursday at Waterfront Park to kick off their season with a polo match along with tailgating, music, food trucks, and wine and beer tastings.

“What we’re doing is we’re taking a little bit of indoor and outdoor polo, and we’re putting it together into an exhibition style match” said Will Boland of the Louisville Polo Club.

Besides kicking off the polo season, Boland hopes that by bringing polo to the heart of urban Louisville, more people will become aware and interested in the sport. “We’re trying to get it out of the private countryside on people’s farms and more in the city where people can see that there’s polo going on. I like having it at the Waterfront because I’m trying to tie horse-equestrian activity into maybe the bourbon row or the downtown Louisville theme, and I think it shows the strong diversity of Louisville that we have stuff like this going on.”

Polo’s roots in Louisville go back years with the many horse trainers and established thoroughbred racing families in the area. Boland’s father, Jim Boland, grew up around such families, many of them living in Seneca Park where polo was first played in Louisville. “It was kind of a park sport when Louisville was more in its heyday … and people actually rode their horses through the parks.”

Louisville Polo has also drawn new participants. “What’s unique about today’s group is that all of these people are all new people into polo that we’ve gotten in over the years. So we have a whole new group of people and they come from various socio economic backgrounds. Some people are country farmers that have horses, and some people are trust-fund babies, so you get the range. The thing about polo is it’s a common arena where you get that diversity in class. You have you know a Mexican laborer who’s a good horseman versus a billionaire who’s out there on his Sunday afternoon. And, as long as they all have polo in common, it’s a common-ground, because everyone’s there for the love of the horses and the sport.”