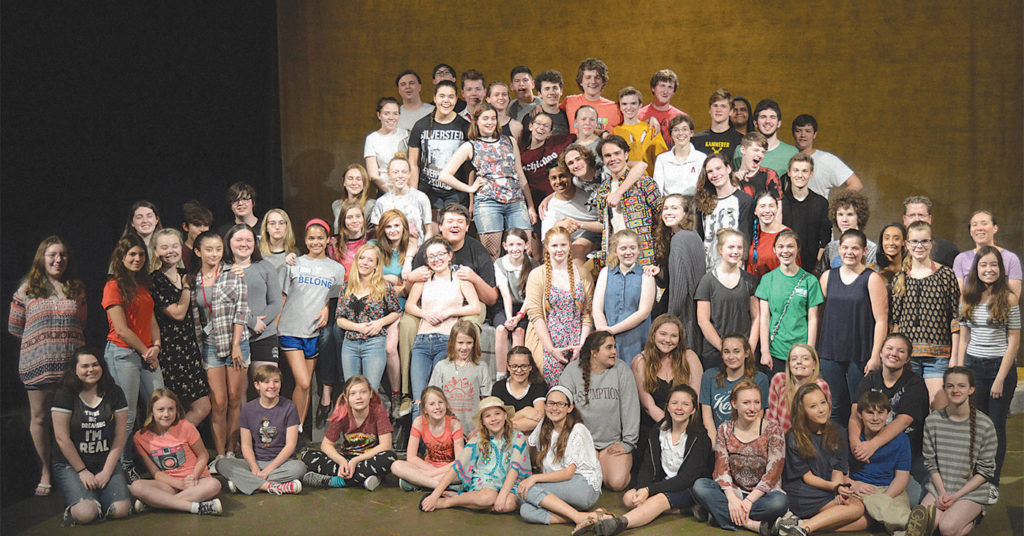 The Commonwealth Theatre Center’s 2017 Young American Shakespeare Festival, which opened last weekend and runs through Sunday, is an amazing accomplishment.

Taken in isolation, the numbers for this year’s Festival are staggering. There are more than 70 young people in the casts of the three productions. They range from grade four to grade 12 and come from schools throughout the metro area. Each of the productions is staffed by a full complement of creative and technical personnel.

And there is the historical significance of the Festival. It’s been more than 40 years since Walden Theatre (which partnered with the Blue Apple Players in 2015 to form what is now Commonwealth) opened its 1976 season with “A Midsummer Night’s Dream.” It’s been some 10 years since Commonwealth’s Artistic Director Charlie Sexton (who played Peter Quince in that first production of “Midsummer”) set a goal of producing the entire cycle of Shakespeare’s 38 plays. And this past weekend, with Saturday’s performance of “Henry VIII,” that goal was achieved, making the Walden Theatre Conservatory at Commonwealth Theatre Center the first youth conservatory — and only the seventh American theater overall — to have produced the entire Shakespeare canon.

That’s an accomplishment worth noting. But what’s more impressive is the extraordinary quality of these productions. I saw all three productions last weekend, and the verve, skill and confidence of those performers was jaw-dropping. These are some of the most complicated texts — and complicated plots — in the English language. But you’d never have guessed it from the way these young performers owned the language and conveyed the stories.

The two history plays on the bill — “The Life and Death of King John,” directed by Jennifer Pennington and “The Life of King Henry the Eighth,” directed by Heather Burns — pose enormous challenges for any cast. They are as chock-full of courtly conspiracies and shifting alliances as insider reports from the Trump White House — but hardly any Americans enter the theater with a prior understanding of medieval politics. Thus, it takes superb discipline just to convey the plot — let alone find the emotional core of the stories.

Both of these productions are noteworthy for having achieved both goals.

Against a backdrop of war (fine fight choreography from Eric Frantz) and papal politics, King John (Kellen Murphy) plots to wrest the kingdom from his young nephew Arthur (Laura Gibson). John’s half-brother, Philip the Bastard (played with droll comic brio by Chase Bishop), offers impudent cynical observations on the state of affairs. But matters grow dark when John conspires with his loyal retainer Hubert (Will DeVary) to eliminate Arthur. Constance, Arthur’s mother (played with fire by Bailey Lomax), delivers an impassioned indictment of those who would treat her son as a pawn. And the story finds its emotional climax in an extraordinary sequence where Arthur’s youthful innocence confronts Hubert’s plans — and then pursues a path that leads to an utterly confounding (and gracefully staged) outcome.

“Henry the Eighth” tells a more familiar story (though the play is rarely staged). Henry (played with a regal insouciance by Parker Henderson) wants to free himself from Queen Katherine (Ruthie Dworin, in a formidable performance) in favor of Anne Bullen — better known to us as Anne Boleyn (delightfully acted by Alexandra Polur Gold). Unlike most of the history plays, this one is bereft of battle scenes — but the courtly intrigues are delicious, and readers of Hilary Mantel’s “Wolf Hall” sequence will enjoy seeing Thomas Cromwell (Nicole Shariat) show up in a meaningful, albeit brief, cameo.

Henry’s battles with the church — represented by the majestically crimson figure of Cardinal Wolsey (Carter Wooten) — are the core of the story. But there are politics aplenty, including the trial and fate of the Duke of Buckingham (Ruairidh Kerr). And though it’s impossible to list all the players, there are great performances by Zoe Peterson (Lord Norfolk), Frances Rippy (Lord Chamberlain) and a couple of gossipy Gentlemen (Janie Akers and Genny Friesen), whose comic observations punctuate the more serious action.

“A Midsummer Night’s Dream,” directed by Charlie Sexton, is more familiar fare, but quite fresh in this spirited, youthful performance. It’s worth noting that the Nancy Niles Sexton Stage at the Commonwealth is a simple, intimate, comfortable facility — and the logistics of all of these productions were a marvel. Performers enter and exit from the wings and from a center aisle that runs through the audience — and streamlined, pinpoint precision kept the action moving so efficiently that running times were kept to around two hours — and not a moment was wasted.

Certainly no moments were wasted in this fairy-laden romantic comedy. The quartet of lovers (Noah Bunch, Jude Stivers Helen Lister and Rachel Friedland) were a blast. Oberon and Puck (Aditya Dixit and Lilly Rich) were fine co-conspirators. And the acting troupe of “rude mechanicals” headed up by Peter Quince (Spencer Neichter) and the strutting Bottom (Field Oldham) were an unending delight – as were the corps of Fairies led by Titania (Andrea Lowry).

Last weekend’s performance of playwright Eli Keel’s “Orpheus: A Silent Circus,” directed by Gil Reyes in collaboration with Head Choreographer Amberly Simpson and Co-Choreographer Anne Bock Miller (both of the aerial arts and cirque studio Suspend, where the performance took place) was a richly satisfying piece of storytelling through the means of dance and circus arts. Very fine acting by Megan Massie as Orpheus supplied emotional heft — but effective lighting, costumes, makeup and extraordinary sound came together to create a finely textured piece of theater. The complicated aesthetics of juxtaposing aerial work with storytelling may have created a few vexing moments — but those were far outweighed by the overarching beauty of the production. Here’s hoping we see more of this. •