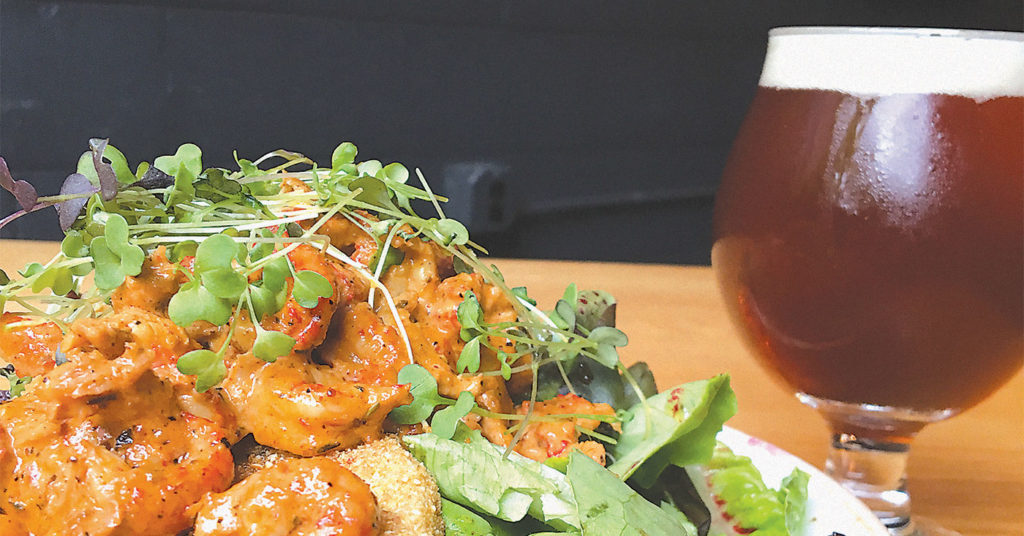 A hoppy IPA goes with the fried green tomatoes in the Crawfish Remoulade at the Crescent Hill Craft House. Photo by Jay Klein

If you did not grow up in the South, you may think that fried green tomatoes are fictitious food, a dish akin to Dr. Seuss’s whimsical green eggs and ham. After all, they appear in the title of Fannie Flagg’s 1987 novel, “Fried Green Tomatoes and the Whistle Stop Café,” later adapted into a movie. But fried green tomatoes enjoy a long nonfictional tradition and very happily have found a place at modern restaurant tables, ironically often as part of “new spring menus.”

Ironically, because the dish originated as a way to use unripened tomatoes left on the vine after the first frost of late fall. Eating the hard, acidic, green fruit (Yes, botanically, the tomato is a fruit, not a vegetable) holds no appeal whatsoever. But slice them up, soak them in buttermilk, dreg in cornmeal and fry in a stovetop skillet until golden brown, and the result is one of the wonders of classic Southern cooking. The sweet, crunchy cornmeal is the perfect foil to the tart, juicy tomatoes.

Wash and dry tomatoes and cut out the hard stem area at the top.

Slice about ¼ inch thick. In a shallow bowl, mix cornmeal, salt, and pepper. Pour buttermilk in a second bowl. Put skillet on a burner, and when hot, add oil or bacon grease to coat the bottom of the pan.

Dip each tomato slice in buttermilk until coated, then in cornmeal to coat again. Handle the slices gingerly so your fingers don’t take off too much of the coating. Lay each slice in the hot skillet and turn heat down immediately to medium. Fry until golden brown on both’ sides, turning over once. Drain on paper towels and make Cream Gravy with the dripping.

Cream gravy is actually made with milk, so often it’s referred to as “milk gravy.” (This is not unlike the “crayfish,” “crawfish” “crawdad” debate.) Bottom line is that it derives flavor from making a roux with the drippings.

Essentially, you drain off all but two tablespoons of the fat in the pan, leaving any crusty bits from the cornmeal. Then add a tablespoon of flour and whisk to blend and to keep it from getting lumpy. When the flour has browned, stir in a cup of milk and heat through. Serve immediately.

The Uptown Café on Bardstown Road recently added fried green tomatoes to its appetizers list. Five slices are served on a bed of lettuce with house-made roasted red pepper aioli. They are perfect to share, or to order as a side dish. They would be the perfect accompaniment to a bowl of one of the Uptown’s creative soups of the day or the rotating seasonal small plates menu. (They are dynamite with one of the current offerings — pomegranate-glazed lamb meatloaf.)

If you are simply enjoying the fried green tomatoes as a starter, there is no better beverage pairing than an Old Fashioned. Naturally, bourbon makes a great match with a variety of Southern dishes. Distilled mostly from corn, bourbon obviously works well with the cornmeal crusted tomatoes. The real pleasure comes in the pairing of opposites: The Old Fashioned, made with sugar and muddled fruit, offers a sweet contrast to the tart tomatoes.

Fried green tomatoes are the foundation for a current entrée at the Crescent Hill Craft House on Frankfort Avenue. The Crawfish Remoulade (Note: Not crayfish or crawdad.) features two large fried green tomatoes on a bed of sweet aqua lettuce topped with a generous portion of blackened crawfish dressed in a spicy Créole remoulade.

I am seriously addicted to this dish, which has enough heat to make my eyelids moisten after the first bite. While Craft House serves an admirable Old Fashioned with this dish, I always drink one of the hoppy IPAs on the draft beer list, which consists of ales and lagers made exclusively by Kentucky and Southern Indiana craft breweries. The beer tames blackened spices on the seafood and the Créole heat of the sauce. It’s a perfect pairing.