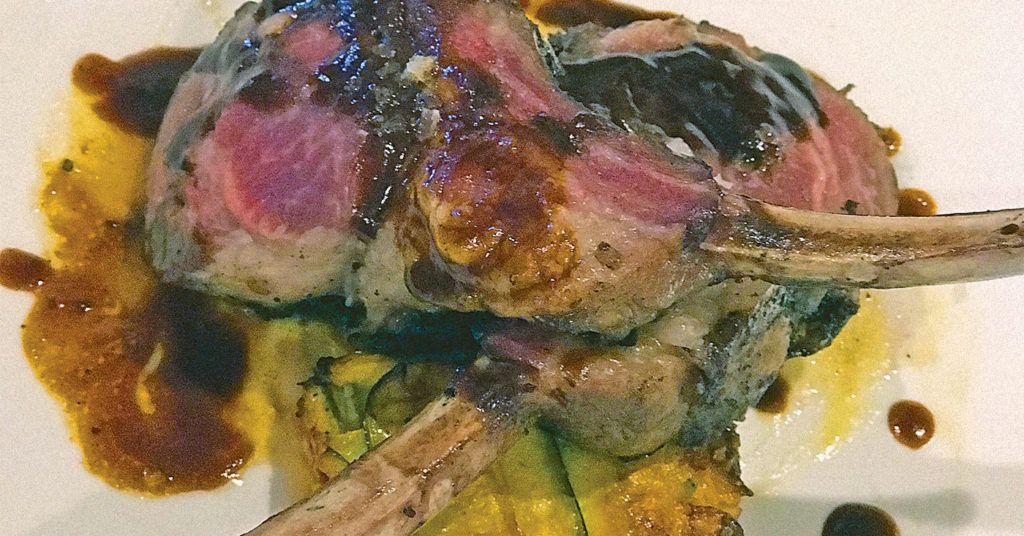 When a restaurant launches in the springtime in Louisville, the owner faces a difficult decision: Rush to open the doors before Derby? Or open gently in post-Derby calm?

The issues involved are not trivial. Opening in time for Derby may pay off, but it poses challenges, too. If things go poorly, the train wreck happens in front of a critical audience.

So, props to Fork & Barrel’s owners, Chef Geoffrey Heyde and his wife, Emily, who risked opening on busy Frankfort Avenue just a few weeks before the race, following a quick, but stylish remake of the former Basa Modern Vietnamese.

Heyde brings a strong team, though, in the kitchen and front of the house, and the early buzz is good. So, Mary and our friends Anne and Don decided to drop by early enough to offer this review in time for Derby visitors and local folks, too.

The decor is simple, off-white walls with a few large photos of Louisville scenes. A long banquette lines one wall, and an attractive L-shape bar fills the back of the room. A huge table for 14, crafted from a single oak beam, affords community seating in a side room. Undraped wooden tables, heavy side chairs and hard floors makes for a noisy environment, which seems to be the norm for hip establishments these days.

In early interviews, spokespersons have described the price point as casual, with an average tab around $30. Let’s just say either the target moved, or we ordered too much, as our party of four left happy, but lighter in the wallet by $280 or so.

Still, I’ll certainly come back, perhaps with plans to choose an app and a drink next time. The menu features eight entrées that range in price from $18 (for fried chicken roulade) to $39 (for lamb chops and shank). About a dozen apps, soups and salads fall from $10 to $20.

Cape Cod mussels ($9) hit the spot. Citric flavors of lime, lemongrass, grilled lemon, Thai basil and cilantro made a memorable broth, with only two small slices of grilled baguette to soak it up.

Fried chicken roulade ($18) was plated on buttermilk-honey biscuits with braised mushrooms in a thick smoked-pepper gravy, with a large, tempura-fried okra pod alongside. The chicken was tender and juicy, but the gravy was mild but for the pepper, and it pooled on the plate, turning the tempura-style chicken and okra breading soggy.

We were surprised that a new upscale restaurant offers no vegetarian entrée, but the kitchen was happy to fashion an appealing and fairly priced meatless plate ($18). A rich, tender potato gratin, deeply scented with black truffles, was topped with seared brussels sprouts, shallots and asparagus, finished with a sauce fashioned from the evening’s parsnip soup with more truffle scent.

Dinner for four came to a whopping $234.26, which we split down the middle and added 20 percent-plus tips.