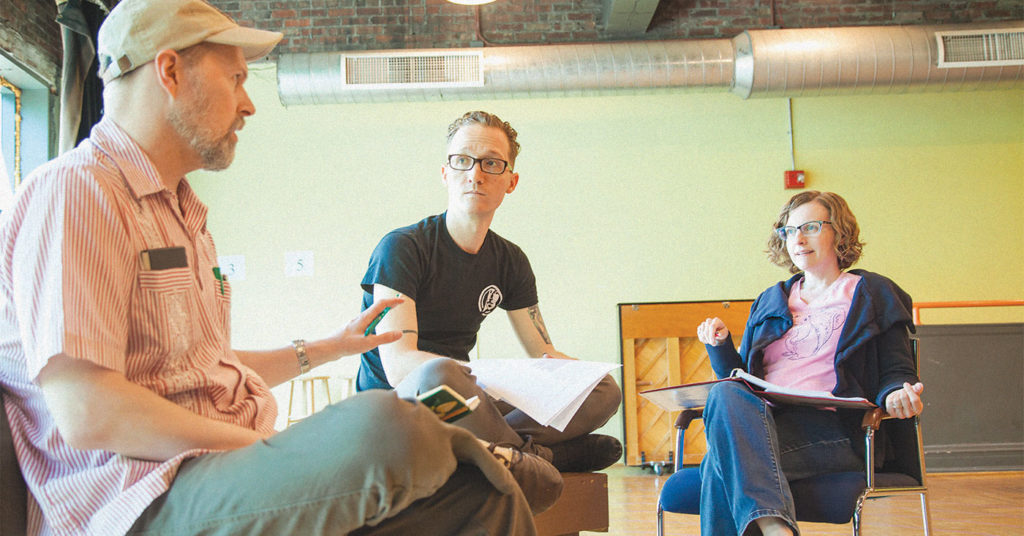 [Editor’s Note: Due to a production error, this story did not run fully in the paper. Here is the entire version.]

A Shakespeare dramaturg can’t consult the playwright for advice.

Still, Greg Maupin, dramaturg for the Kentucky Shakespeare Festival in Central Park, has plenty of tools at his disposal, such as helping actors understand language and motivation, suggesting stage direction… even cutting scenes.

During one of the first rehearsals for “The Tragedy of King Richard the Second,” the second production on this summer’s schedule, he sat next to a table laden with Shakespeare tomes. Maupin was sporting a baseball cap with the motto “Take Pains. Be Perfect.” — a dramaturgical maxim that comes straight from the Bard’s own “A Midsummer Night’s Dream.”

That cap is Maupin’s dramaturg cap. When he wears it, members of the company are welcome to pepper him with questions about pretty much anything having to do with Shakespeare, up to and including the intricate dynastic politics during Richard II’s reign. When he doffs his cap, it means he’s stepped away from dramaturgy and into one of the on-stage roles he plays this summer.

By the time rehearsal started, Maupin had already prepared rehearsal scripts that included notes about the text — definitions of obscure words, possible interpretations of figures of speech, pronunciations, rhythmic accents and the like. And he and Director Amy Attaway, Kentucky Shakespeare’s associate artistic director, had already delved deeply into both the text of the play, the historical sources Shakespeare used, the play’s production history, and contemporary thought about both the historical Richard and Shakespeare’s vision of Richard.

But mostly, they had looked at the text.

Three years ago, during the 2014 season, when Kentucky Shakespeare was rebuilding its program under the new leadership of Producing Artistic Director Matt Wallace, Kentucky Shakespeare decided to start building their productions by using the 1623 First Folio editions rather than contemporary, edited versions.

There were two reasons for that, said Attaway. “First, we really have a reverence for Shakespeare’s words, and those editions are as close as you can get to the original. Second, we had Greg, and although Matt has a deep knowledge of Shakespeare, and I’m a Shakespeare nerd, Greg is a person who really loves to dive into the language.”

Maupin’s innovative approach to classical texts was a defining feature of the company he cofounded, the late lamented Le Petomane Theatre Ensemble. He said a dramaturg brings another perspective to the script, but also, given the demands of Kentucky Shakespeare’s summer schedule, offers a very pragmatic benefit: “With three plays to prepare over just a few weeks, having a designated dramaturg helps balance the work load.”

The historical Richard II, said Maupin, lived about two centuries before Shakespeare — roughly the same amount of time that separates the historical Alexander Hamilton from the Broadway “Hamilton.” And just as the political battles of Hamilton’s time still resonate today (e.g., in our battles over the balance of power between the states and federal government), Richard’s legacy echoed through the dynastic politics of Shakespeare’s England.

For a dramaturg, he said, the politics are important not for their own sake — Shakespeare’s history plays are not history lessons — but to facilitate the storytelling.

Richard — both the historical Richard and the theatrical Richard — is a strangely fascinating and polarizing figure, capricious, unpredictable, arbitrary, devoutly convinced of his divine right to rule. So one of the key dramaturgical challenges is that Shakespeare’s depiction of the title character is hardly kind; his relationship with the queen reveals the more sympathetic aspects of his character.

The rehearsal I observed focused on that relationship and developed into a free-flowing example of how dramaturgy works when a team of artists delves into a play. The word “dramaturgy” itself surfaced frequently — not around historical questions, but as part of an investigation into the relationship between Richard (played by Neill Robertson) and his Queen (played by Alisha Espinosa).

It’s a vexing relationship because the Queen is Richard’s sole consistently stalwart supporter — but the two figures have only a couple of direct interactions across the span of the play.

For Espinosa, Richard’s flaws pose complications for her character. “If she loves him, what kind of a person does that make her,” she asked. “I’m struggling dramaturgically with where she fits, what her story is and how she fits into the action.”

For Attaway, finding a way to convey that the Queen loves Richard is essential. “If we don’t get the love part,” she said, “we won’t get the tragedy part. And this is the tragedy of Richard.”

Richard’s attitude toward the Queen, said Robertson, was absolutely clear. “I feel like the nature of Richard is that I just love her. She’s so pretty, and she’s the Queen, so she’s strikingly and beautifully dressed, and she’s like a doll. This is what being a King means — I have this sincerely loving partner who is just beautiful and I just love looking at her.”

But the scant contact between the two characters raised a practical question, said Espinosa. “How can we earn that love when there are so few moments when we interact?” The actors and director went deeply into the text, dissecting language and imagery and trying to discern what the words on the page reveal about “character.” In a Shakespeare script, after all, there are few stage directions and the only clues to a character’s psychological and emotional state must be found in the lines of dialog.

As the conversation paused, Attaway glanced at Maupin, who had been silently observing, and asked whether he had anything to add.

“I don’t have anything that’s heavily text-based,” he said. “But thinking about all these scenes — where the Queen appears with and without the King, I wonder if there is something there to work with. Richard’s personality is that he’s a mess. He’s all over the place.”

Then, he reflected on what the implications of all those scenes. “Perhaps when the Queen is with him, her job in the relationship is to buck him up, support him.” Looking at Espinosa, he suggested, “Maybe when you’re with him you can support him non-verbally. Even when you don’t have spoken lines you can use body language to send the message, ‘You’ve got this.’ You can be Lady Macbeth in a good way. But when you’re on your own, when you’re not with him, you can let your guard down and show your own exhaustion and vulnerability.”

And then this early rehearsal moved on to other things.