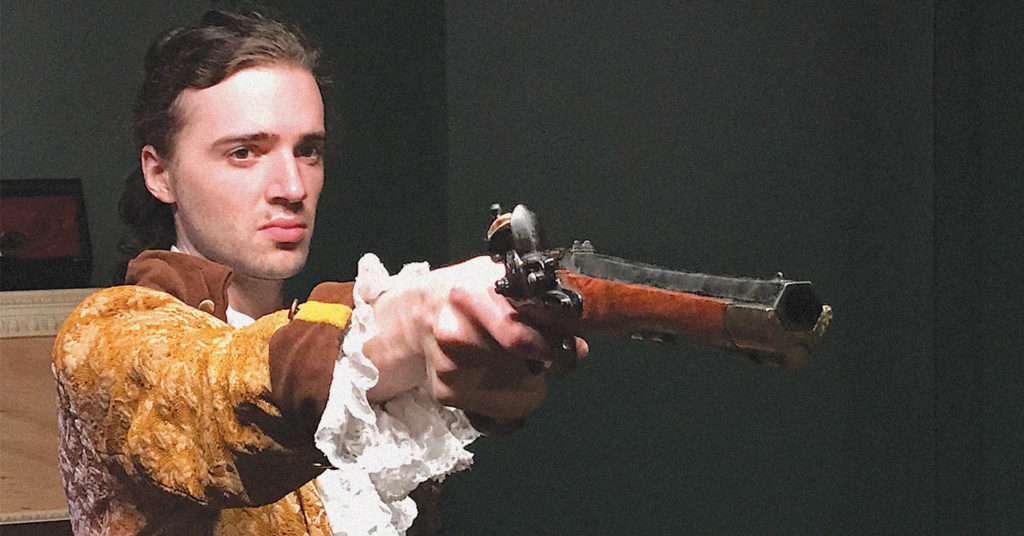 You don’t have to dive too deep into the social-justice blogosphere before you hear the phrase “toxic masculinity.”

The concept is that our modern-day ideas of what make a man are rooted in attitudes and practices that are deadly to men, and even more dangerous for women.

Despite being set in the 18th century, “The Coward,” the 2011 play by Nick Jones on stage through next weekend at The Bard’s Town, is an examination of the toxic masculinity of another time.

The action follows Lucidus Culling (Ben Park), a young man of the landed English gentry. His father, Nathaniel Culling (Sean Childress) is a war hero and a member of Parliament. At the start of the action, the two establish the central conflict of the play. Nathaniel Culling demands that Lucidus Culling engage in a pastime we are told is necessary to defend the honor of a noble family: dueling.

Lucidus Culling, a young man focused on entomology, wants nothing of it. Nevertheless, he tries to make his father proud. Violence and shenanigans ensue.

Given a brief outline of the plot, one might expect the tone of the play to mirror Molière, or perhaps the lyrical snobbery of Oscar Wilde.

Instead, Director Amos Dreisbach, with strong nudging from the script, has pushed ensemble and the action much closer to Looney Tunes, or perhaps Monty Python.

No accent or voice is too thick or silly, and no set of responses too broad. It’s an interesting take on a time period most often shown as deeply reserved. The script also has a lovely mix of elevated language, and smart aleck adolescent speak.

Park’s Culling is the height of mincing pomposity. He gestures flinging his wrists, does a dainty jump back from anything that frightens him, and his posture is closed off and foppish at all times. Parks sets himself apart here with his ability to keep the physicality of the character on full blast for the entire show, never letting it slip or sag.

He also wisely keeps his characters foppery far from familiar homosexual stereotypes, instead building an effete quality that feels whole and true to Park’s vision of the character.

In a sea of silliness, Chidlress’ elder Culling plays the straight man in most of his scenes. He brings a gravitas and that serves to underline the absurdity rather than counteract it.

Filling out the trio of lead characters is Henry Blaine (Eliot Zellers). The younger Culling hires Blaine to serve as a secret surrogate in a duel. Of course, the arrangement gets complicated quick, and leads to escalating violence.

Zellers is appropriately swarthy, with an accent somewhere between cockney and pirate, which complements his physical swagger nicely.

Park and Zellers work together frequently with the Walden Alumni Company, so it’s interesting to see them step outside that institution and work with another company. I’m always excited to see performers trying new things, and that includes new companies and stages.

The younger Culling, of course, has a love interest, played with appropriate zeal by Megan Adair, a regular on The Bard’s Town stage. Her performance as Isabelle Dupree has a bright vicious edge, and Dupree is written with more verve than one would expect from a love interest who’d no doubt fail the Bechdel test, even if there were another woman around with whom she could converse.

The remaining cast members include Lee Stein, Tony Smith, Jacob Cooper and J.P. Lebangood. Each plays a variety of roles, and they’re all comfortable with the slapstick tone set by Amos and the script.

It’s nice to see such a large cast at The Bard’s Town, although it does get cramped at times. So much of modern drama limits itself to four or fewer actors, generally speaking, because of shrinking theater budgets nationwide. But it’s hard for a play to reach the peak of mayhem for which “The Coward” is clearly shooting without a good number of bodies on the stage.

It’s also nice to see The Bard’s Town stepping so far away from its typical modern-day family dramas. This is the first period piece I’ve seen on its stage, and it’s a nice change.

There’s a lot to like here, and theater fans should have a good time, but there are some drawbacks.

At first, the cartoonish style of the piece was refreshing, but with each action playing every bit out to the fullest extent of zany, the plays runtime stretched to just over two hours. It felt overlong for the subject matter. The addition of an intermission, placed in a way that didn’t serve the play’s momentum, didn’t help the play feel shorter either.

Jones also didn’t know when to end his play. This sort of buffoonery isn’t served by a denouement, or a summation of ideas, which he provided in an extra scene and an overlong end of his climax. It added another 15 minutes to the play that it didn’t need.

Perhaps he could have taken a lesson from The Roadrunner and Wiley Coyote. Don’t explain again why dueling is futile, or why the Coyote should just use that phone to order takeout.

End the action while the last bloody bit of violence is still wet and fresh on the stage. •