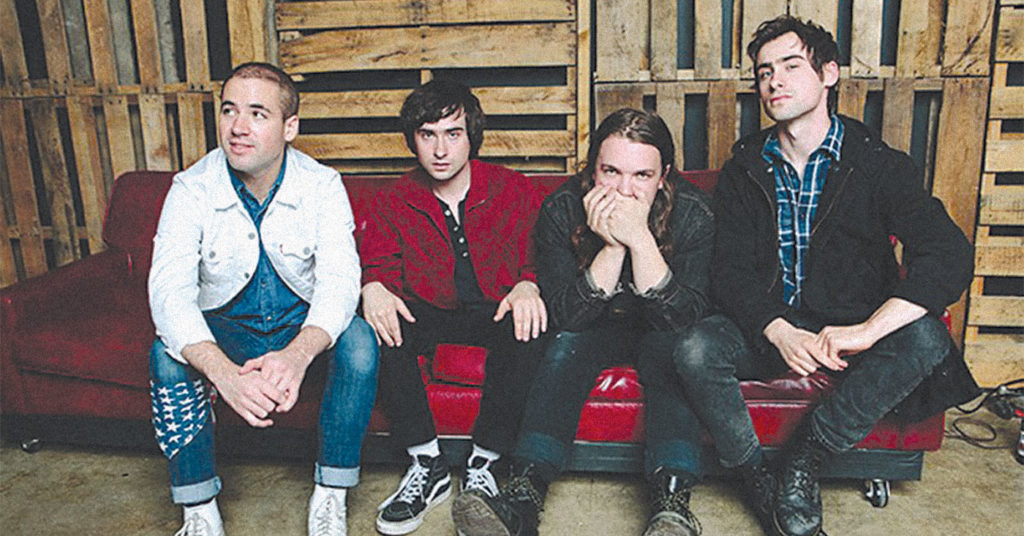 White Reaper, for a few years now, has been moving slowly toward the sound that they have achieved on their new record, The World’s Best American Band. As they’ve grown with the band, they’ve naturally become more thoughtful in terms of what they want to get out of their sound. But they haven’t lost the raw power that made them immediately captivating in the process, charting a path that is never the same, but also doesn’t burn down what they’ve already built. Everything is slower, with a bit more space and time attached to the songs, but the core of what they do well is still there — the hyper and melodic vocals, and the instruments that hit like shots of adrenaline. Before they release The World’s Best American Band this Friday, and perform at Zanzabar on Saturday, we caught up with them to talk about the new record, other great American bands, hot dogs and people who have tried to kill them on tour.

LEO: You downshifted the tempo on the new record, making a bigger, classic-leaning rock album with more space than usual. Can you each, individually, talk about how you and your instrument contributed to that?

Tony Esposito (vocals, guitar): I feel like all our other songs are just power chords, and I wanted to not do that on this record. I would just stand there for hours every day [in the studio], trying to come up with riffs. I wanted to do something a little more creative. And the vocals — I didn’t really think about those until everything was done. I feel like the vocals are pretty similar to how they have been in the past. Everyone says that this record sounds so different, but, to me, the vocals bring it full circle.

Ryan Hater (keys): We wanted to consciously shift how keys were used in the band. On the previous records, they just kind of come in as a cutting melody that stands on its own, but on this, we wanted to use piano and organ to layer, and build a foundation underneath everything else that’s going on. We wanted to take it in a more classic-rock piano vibe than the synth tone we used on the previous records. There are really not any synth leads at all. I feel like it made it a little more swinging, and old-school, ‘50s kind of rock, with jangly piano and organ chords in the background. It creates more texture, a more dynamic sound as a whole. Like a lot of normal bands do. [Laughs].

Nick Wilkerson (drums): I recorded with a huge drum set, but I didn’t generally sound like it, but I wanted a lot of options. I just wanted to explore the drum kit a little more. There are a lot of songs where I dumb it down completely and strip a lot away, which I think is good. For some of the songs, I kind of laid back, and for some of the songs, I kind of went for it more than I ever had before. I just found a good balance, I think.

You guys went over your initial studio time, took a break to play some shows, and then came back to finish the record. Did having that extra time to let some of the ideas breathe have an impact on the record?

NW: We needed the break. We were just getting tired. And we needed a breather.

TE: We were in the studio to make this record longer than the last two combined.

RH: It made it become the record that it is. We came back with two songs that weren’t intended to be on the record in the beginning. It was cool to get to tweak it a little bit.

Being labeled as garage or punk seems to bother you. Why?

RH: It don’t mean anything to me. Those words are redacted from my brain. When I see the word garage or punk, it’s blacked out like an FBI briefing. If I told my dad we were a garage rock band, he wouldn’t know what the hell I was talking about. It means nothing to most people.

If White Reaper is the best American rock band, let’s round out the top five. You each pick one. No repeats.

TE: I can’t decide between Kiss and Lynyrd Skynyrd.

The promo video of plugging in instruments to a hot dog disguised as an effect pedal made me laugh. I know you all are big advocates for hot dogs. Who has the best in town?

Everyone, after debate: Louisville Slugger Field

You’re ready to go back on tour. What’s the best story from you last tour?

RH: We were cleaning out our van in Tacoma, Washington, at a Motel 6, and there was this man that was sitting on this curb next to the van, holding a dog’s leash, but there was no dog. And he’s just shouting things at random people. So, we’re all ready to go, and we’re getting ready to head out. Tony turns the key, and this guys runs and gets into his car, which is a total twist. And he procedes to pull directly grill-to-grill with our van.

NW: Face-to-face with our van, with this manic look on his face.

RH: So we decide to give him the benefit of the doubt, that we pulled into his spot or something, so Tony has to throw it into reverse and back away from this guy to pull out. The guy whips his car around and aggressively follows our van. So, we’re like, ‘What the hell is going on.’ And Tony whips it into this other parking lot.

SW: We were almost to the highway, so I was like, ‘Let’s just go into this parking lot to see if he follows us.’

RH: Grill-to-grill again, in the middle of this other parking lot.

NW: Then we got on the highway and he followed us, trying to ram us off the highway.

RH: He kept swerving toward us. There is really no resolve to this story except Tony got over, through all of the lanes and we lost him.

SW: Probably the scariest part was when he got behind us and revved up his car, then, got in front of us and slowed down. And every time we would switch lanes, he would block us.