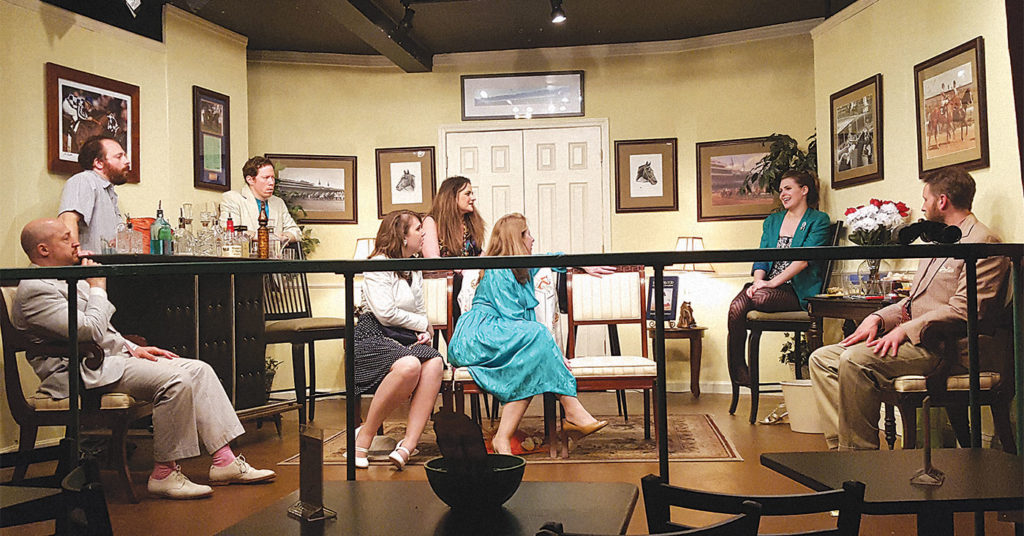 When Brian Walker’s “dirty sexy derby play” opened at the MeX Theater in 2008, it’s doubtful anyone would have predicted it would wind up becoming a near-staple on Louisville stages. The play has had at least four productions (that I know of) over less than a decade — from more than one theater company.

That script, set in 1974, the year of a Woody Stephens horse named Cannonade (and a year of tornadoes) featured four couples at a swingers’ key party. It’s a party that goes awry in all the ways a party can go wrong, and the romping pleasures of a sex farce eventually delve into darker territory.

Walker’s new play, “The Last Party (being a sequel to the dirty sexy derby play),” is being staged now by Finnigan Productions at The Bard’s Town. It’s set at a Derby party, this time on Millionaire’s Row at Churchill Downs. The calendar has advanced to 1984, the era of Ronald Reagan, the newly-identified AIDS virus and the year of another Woody Stephens horse.

The same four couples have come together for what amounts to a very uncomfortable reunion. And it so happens that this production is also something of a reunion for the cast and crew: All but one of onstage performers have appeared in at least one production of “dirty sexy derby play.” So has Shaun Kenney, who, this time around, is stage managing and handling sound.

Although this is a sequel, familiarity with the first play isn’t required. A brief program note summarizes the tumultuous results of the infamous key party — and all of the relationships it disrupted.

Keeping track of all those relationships is roughly as complicated as keeping up with the entire genealogy of “Game of Thrones,” but Walker systematically re-introduces all of the personnel, and well before the end of the first act everything is pretty clear.

That’s partly because this script is sort of an actor’s dream — and Walker (who also directs) and his cast have created some vivid characters.

First, we meet Victor (Andy Epstein), who summoned his old friends to this party. His invitation didn’t say why, but we quickly learn that Victor (who was a closeted gay man whose coming out was precipitated by the key party) has recently lost his partner of many years, and he himself has recently be been diagnosed with “gay cancer.” He hopes that before dying, he can guide his friends into some sort of reconciliation.

As each of the other characters arrives, the stage action freezes while the character delivers a brief monologue detailing his or her perspective on the past and the present. First, we meet Victor’s feisty, bold ex-wife Francine (Briana Clemerson) — who is now in a romantic relationship with a woman.

Then comes redneck ex-con Dennis, played with unabashedly priapic glee by Corey Long. Dennis figures to hit some races, because he visited a psychic earlier in the day. In fact, he visited two, so he could determine whether one of them was a phony.

Dennis has no affection for his affluent cousin Carl (Bryce Woodard), because Carl, who could have afforded it, never lifted a finger to help Dennis during his trial or during his stint in prison.

Lana (Kelly Kapp) and Tim (Ben Unwin) are the only couple that remained intact after the 1974 party. But their relationship is sinking fast, thanks to irreconcilable differences about sex and children (and Tim’s predilection for pornography).

Dennis’ ex-wife Theresa (Meghan Logue) is bitter about the abuse she suffered at his hands. And Vanessa (Abby Braune), who left Carl and Louisville for dreams of Hollywood stardom, has her own secrets to hide.

Each of these eight solo vignettes is nicely written, fun to watch and helpful in resetting the story. But it’s also a device that slows the pace during the first third of the play.

Still, once everyone has been introduced and the action gets going, it does so with a comic bang that triggers a richly satisfying second half. All of these characters have been hiding secrets and harboring grudges for years. And it’s when the confessions start erupting (beginning with a powerful piece of acting from Braune) that the compassion starts flowing.

The last half of the play offers a turbulent mix of comedy and drama. A good measure of comedy is served up by Michael Roberts, who makes comic appearances as a betting clerk, a pompous chef bearing platters of deviled eggs, and a be-wigged Tammy Faye Bakker (plus more).

By the end, there’s reconciliation all around. Long’s Dennis never ceases to swagger and boast — but even he finds that dreams can come true, and he and Theresa achieve a guarded reconciliation. Kapp and Unwin gain a new radiance, as their characters find a mutual path to liberation.

There are tender moments all around. And for Victor, whose party this is, the finishing line is a happy place to be (and who knows — maybe he’ll still be around to see Go For Gin win in ’94).