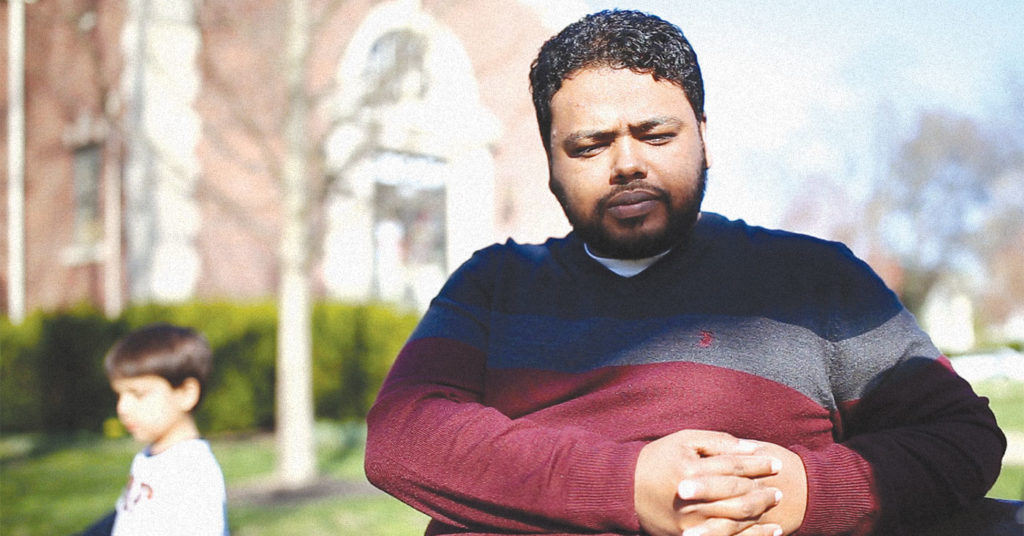 Sadiq Mohamed and his son ZakariaPhoto by Amira Karaoud

This is the second of seven stories LEO will publish about immigrants in Louisville who came from countries — Iran, Iraq, Libya, Somalia, Sudan, Syria and Yemen — that President Trump initially hit with bans. Documentary photographer Amira Karaoud said about her series of photographs and interviews: “The ban order and cut of government funding to resettlement agencies are hurting the peace and economy in the U.S. Its impact goes beyond refugees and immigrants. Yet solidarity is growing within the immigrant community, as well as from outside of it, and people are coming together. True government does have the power to control economy, political systems and social freedoms, but it is the First Amendment that governs. People’s awareness and solidarity and their persistence to exercise their First Amendment rights is what will save the U.S. today, by pushing against Trump’s abuses.”

Name: Sadiq Mohamed, a father of two and a husband.
Country of Origin: Somalia
In Louisville since: 2007
Job: Self-sufficiency caseworker at Catholic Charities of Louisville Migration and Refugee Services.
Education: Bachelors of arts in International Study, IU Southeast; pursuing a graduate degree in migration studies from the University of London.

Why did you choose the U.S.?

I came here to make a better life for myself — looking for better opportunity — and a place where I can achieve my fullest potential. In the U.S., I can achieve more. I can do more for myself, my family and my community.

What do you think about the ban order?

When I first heard it, my reaction was like, ‘This cannot be happening, not in the U.S.’

Back in Somalia or even in Kenya as a refugee, I lived in fear. Fear of the authorities, fear of the government. The government can do anything anytime, as they wish. In Kenya, there was a harassment from the police on Somali refugees. There was lots of abuse. That fear I used to live with in Kenya is same fear I am feeling today living here in the U.S.

Before the ban order took place, I thought I live in a democratic country, where people live life based on the principle of rule, of law. Now I feel like I live in fear again, like when I lived in Kenya, where the government do whatever they want and they can get away by it. It’s wrong!

What message do you have for Americans?

During the Refugee Day, in March, the local refugee community, with people from the resettlement agencies — we went to Frankfort to talk to lawmakers and deliver a message, which is simple: We want to keep Louisville a welcoming place.

Today, I have same message: I want to keep Louisville, Kentucky and America a welcoming place.

These last few weeks many things shuffled in my life, personal and professional.

My mother moved here a year ago, and, like any mother, she would like to see her kids. My brothers, who live in Kenya, were planning to come visit. They started their visa process before the ban order. After the ban, everything was put on hold, as well as their request for a visa.

That made my mother sad. She doesn’t know what to do, even though she has her green card, she is afraid to leave the U.S. and won’t be allowed to come back. That’s in my personal life.

In my professional life, as government cut its funding for resettlement agencies, most of us are jeopardized [and could] lose our jobs. Where will we go from here? Yet to find out. •

Amira Karaoud has shown her work internationally, and at the Crane House, Spalding University, Louisville Free Public Library and other locations.