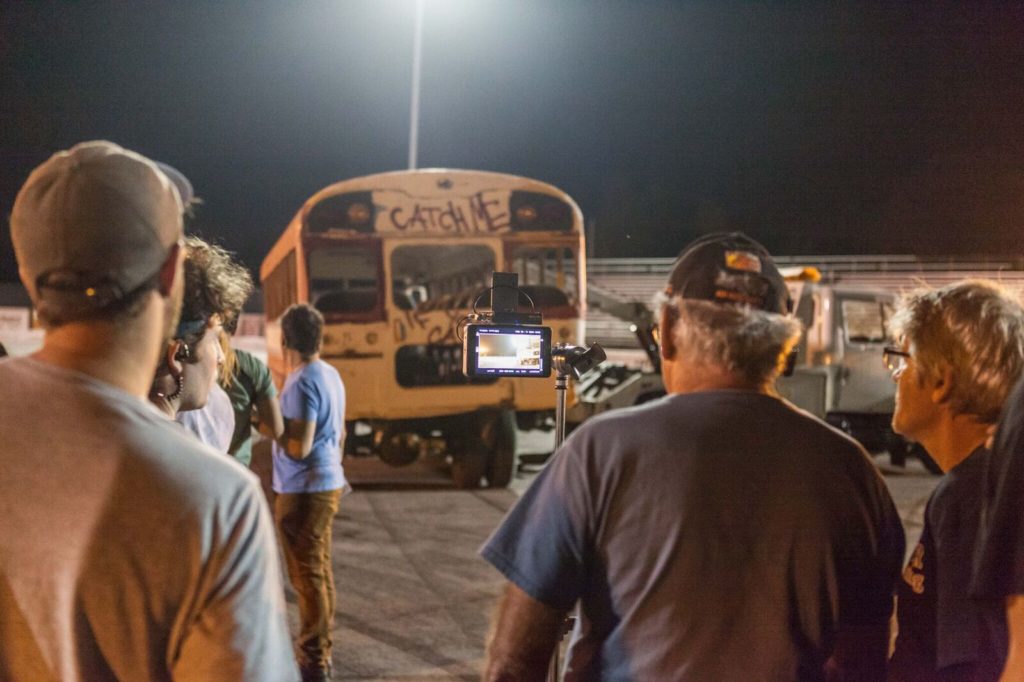 This week, a short film has been shooting in Southern Indiana. It has a likable lead character named Yosef. It’s a story of bravery, with an unforgettable backdrop — the world of competitive school bus racing.

Just a quick, 10-minute drive from Louisville is the Sportsdrome Speedway. It’s clean and fairly well-cared for, and probably looks the way it did when it opened in 1947. That anachronistic feel makes it seem like another world.

As I walked up with photographer Bill Brymer, I looked through the admission gate, over a low concrete wall, and through a fence. I saw a menacing flash of yellow pass by, like a shark fin. I knew I was seeing only a hint of what was to come.

After over a year of prep, filmmaker Naveen Chaubal is finally overseeing the shooting of his short film “Pinball.” He’s a youngish-looking, middle-aged guy, and he was calm and in control on Wednesday night. He and the crew had been at it for several days, but that night they were filming the big bus racing scene.

Years back, while in Gautemala, Chaubal became obsessed with the unregulated bus culture there and the Wild West feel of it. He moved on, focusing on other movies and shoots, but he still spent time diving further into other bus-centric subcultures, mostly through YouTube.

“I had heard about the speedway through pursuing the internet, looking for buses, trying to find some type of story, and came across this race track,” said Chaubal. “I saw there was a race in a couple of days, and came down here… drove down on a Thursday, the race was Saturday.”

He tried to make contact with the owners or promoters of the Speedway, but didn’t have any luck. So the day before the races last year, he showed up and looked around.

He skulked around the property, which looked foreboding to Chaubal, and then a man suddenly drove up on an old John Deere tractor. Chaubal figured he was in trouble, but instead the man — Mike Gibson, the main promoter of all the races — gave him a friendly greeting, apologized for not emailing him back, and invited Chaubal in.

“He said, ‘Pinball’s over there, and he’s painting one of the buses — you can go talk to him,’” Chaubal recalled.

The filmmaker spent that evening talking to Pinball— the nickname of one of the bus racers—as well as Pinball Jr., and Pinball’s wife (Mrs. Pinball, presumably).

The next day, the day of the first of only two bus races in the season, Chaubal returned. He interviewed racers and fans and got as many details as he could.

It was a world away from the bus culture that first intrigued Chaubal, but the spirit felt the same.

Chaubal had found another Wild West, and a bunch of freewheeling characters already lived there. Now he just had to craft a story.

Once he knew he was going to make this short film, Chaubal recruited Bryn Silverman, a longtime friend and fellow University of California, Los Angeles, film school graduate.

He returned to the Speedway in August for the second night of bus races. He made a teaser trailer, hoping to use it for a Kickstarter to fund the film.

He got his trailer, and raised $31,000. With cash and script in hand, he and Silverman came to Louisville to assemble the crew, and to cast the movie.

They spent three months ironing out the details. One of their allies in the endeavor was Gibson, who would be providing the location, the stunt drivers and the buses themselves.

Gibson is a savvy business man who describes himself as “an entertainer.” The speedway runs all kinds of races throughout the year, and Gibson oversees them all. He’s been doing it his whole life, in one capacity or another.

“I started here because my father started here,” he said. “My father’s been here since 1968, this is his 50th season, and the my grandfather was here before that.”

He was a gregarious host on the night of the shoot I attended, and between him, the hulking and scarred buses looming everywhere, and the loud and jovial bus racers razzing each other at full volume, it was easy to see why Chaubal wanted to set a movie here.

As I interviewed Gibson, and extras milled about, there were already buses on on the track, stationary, waiting. Chaubal and Silverman were all over the place, working on getting the first shot set up, corralling extras, and finding a parking spot for the food truck, The Kentucky Taco Company.

Adam Sumner, like many of the extras, was there because he is a regular at the speedway.

It’s a good thing there was good food, because like every film shoot since the caveman days, it was a lot of hurry up and wait. Bus racing is the biggest stunt I’ve ever been around on a film set, so I was getting excited, and there was some real anticipation from the crowd.

While we waited, I spoke with 16-year-old Yosef Alwindawi. He plays the film’s lead, a young orphan named Yosef. The two Yosefs are pronounced differently but spelled the same.

After discovering the wonderful world of the Sportdrome, Chaubal crafted this story about a young immigrant, who lives in an abandoned bus, and dreams of finding glory and friendship at the bus races.

Alwindawi is also an immigrant, originally from Iraq, though he doesn’t dwell on his past in conversation — he’d rather talk about acting, fame or sports.

“I’m not a big fan of fame, but, if I get famous in acting, I wouldn’t mind it, to be honest, but my main focus is playing soccer,” said Alwindawi.

Like most of the actors, Alwindawi wasn’t recruited by a casting agent. Chaubal and Silverman went around to area schools looking for kids, going to places such as Fern Creek High School, and they found Alwindawi at Seneca High School.

Alwindawi just happened to sign up for theater class this year: “I just seen it on the paper to sign up for classes, it just looked eye grabbing, you know?”

Despite his take-it-or-leave-it attitude towards fame, he admited to enjoying the attention he’s getting on set.

“I feel like a celebrity, man, they are treating me so well,” he said. “I’ve never been treated this way, like I’ve never felt this important.”

All in all, he’s a pretty typical teenager. His hair is just a little too long, he’s got that look like he’s still growing into his arms and legs, and, in his spare moments, he barely sits still, chatting with other people on set or juggling a soccer ball with his knees. But, just like other teenagers, he’s already got plenty on his mind, and he applies it to his character.

“Well, I’m an outsider, and so is he,” said Alwindawi. “I came to the United States feeling like an outsider, I didn’t know how to speak the language, and I wanted to fit in, just like this kid.”

Night came, and the bright lights of the speedway gave everything a warm, yellow glow.

It was getting closer to action time, so my photographer and I went out onto the actual track to get a little closer to the action. The assistant director and director of photography were setting up the camera. We wanted to be out in the middle of the crew when they start the first show, but it once again starts looking like it’s gonna be awhile.

We sat on a monster truck-sized white tire, right next to the race track. Then we heard an engine gun across the speedway as two buses started up.

They were belching white smoke, and covered in crude paint and decorations. The engines growled as the got up to speed and start moving, looping around the track, and I had a moment of panic as I realized how close to us their path would take them. Maybe it was 15 or 20 feet away, but they felt like were inches away.

If you’ve never stared down a speeding hellbent bus, I highly recommend it. Gets the blood going.

Of course, the buses passed us at a safe distance, but it’s easy to see what the fans come here for, and easy to see again what grabbed Chaubal’s attention, leading him to write this movie.

Despite the colorful backdrop, the film is about these big themes, immigrants and outsiders. The character Yosef is the stand in for every kid who’s recently got to this country — or trying to get here — wanting to belong. And in “Pinball,” America’s stand in is Victory Lane Speedrome, an exhilarating world full of high-speed buses and trash-talking drivers.

It’s a world that I can’t wait to go back to, whether it’s the film “Pinball,” or the next time those buses rev up, belch white smoke, and roar to life.

The next bus races at Victory Lane is May 27th.