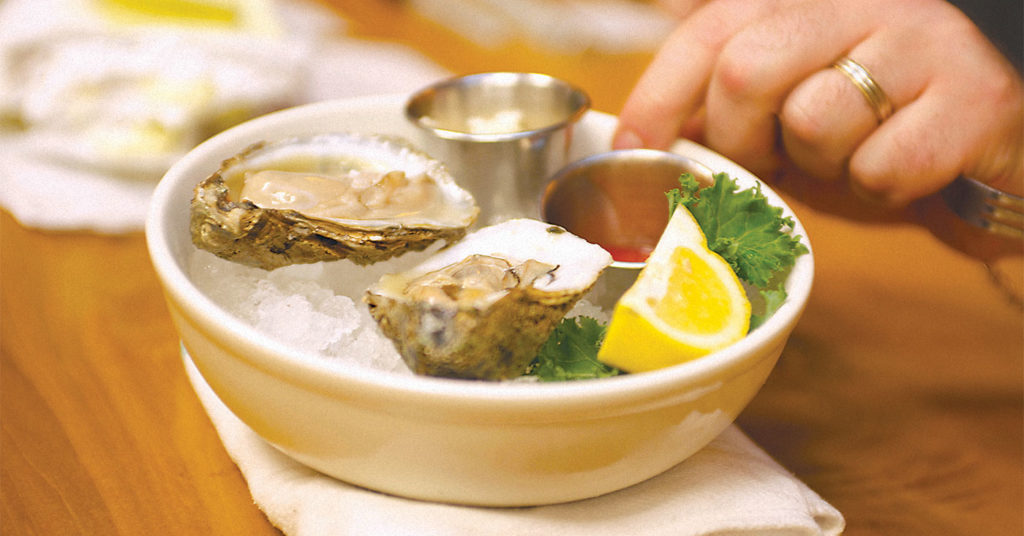 On the title page of her classic compendium of recipes and lore, “Consider the Oyster,” M.F.K. Fisher quoted Jonathan Swift: “He was a bold man that first eat an oyster.”

Bold indeed. I will confess that it took me decades to summon the nerve to bite into the glistening, quivering mass of a raw oyster. More than one friend tried to convince me of the mollusks’ sweet and briny goodness. But the thought of downing my food live evoked “Star Trek” scenes of ferocious Klingons tucking into squirming plates of their favorite delicacy, gagh or serpent worms.

Happily, there is nothing in the least bit wormy about oysters and so, sometime in my 40s, I finally overcame my squeamishness and slurped my first uncooked bivalve. Why had I waited!? I don’t remember which oyster variety it was, but, since that time, I have been compiling a list that alphabetically begins with Amai and ends with Yaquina Bay. In between are 78 others (and counting).

All this variety is a result of geography. There are only five biological species of oysters found on the coasts of North America, but exactly in which waters they grow, which little inlet or cove they inhabit, will affect their flavor. Therefore many names, such as Colville Bay or Snow Creek, tell you where the oysters lived.

Whenever I go to New York, I have lunch at the famous Oyster Bar in Grand Central Station, obviously a great place at which to add to my list. In Chicago, Shaw’s Crab House is the go-to place for oyster varieties. And when in Seattle a couple of years ago, I ate at the most charmingly named oyster bar in America — The Walrus and the Carpenter. (If you don’t remember Lewis Carroll’s darkly humorous, oyster-centric poem from “Through the Looking Glass,” I recommend a quick Google.)

Thanks to Louisville’s fortuitous status as a shipping hub for UPS, I don’t have to leave town to indulge in my oyster collecting. Fresh varieties are flown in practically daily from both coasts. You’ll find oysters on the menu at the casual Garage Bar, at the upscale Z’s Oyster Bar and Steakhouse, and at several eateries in between.

At Garage Bar, which has a rotating selection of fine craft beers, I recommend accompanying your oyster selection with a very traditional beverage pairing — stout. Something about the combination of the delicate saltiness of the shellfish and the dark roast maltiness of the beer is just perfect. A Guinness ad from the 1940s summed it up, “Guinness makes the oysters come out of their shells.”

Oysters and stout complement one another so well that there is even a style of beer, oyster stout, brewed using the mollusks. The first may have come from Young & Son Portsmouth Brewery of New Zealand. It released Victor Oyster Stout in 1929. A careful browse of liquor store shelves reveals a handful of oyster stouts are still available today. For example, Flying Dog, a craft brewery in Frederick, Maryland makes Pearl Necklace Chesapeake Stout and boasts that Rappahannock River oysters are used in the brewing process.

But stout isn’t always on tap, and that’s where my other oyster beverage of choice is practically a fail-safe — the gin martini.

The fascination of oysters is that they don’t all taste the same. Oyster authority Rowan Jacobsen has concisely summarized the broad categories of flavor based on those five species I mentioned as follows:

—European Flat (Ostrea edulis) – medium, metallic, with a trace of caviar and hazelnut

To my taste, an icy, bone dry gin martini is the perfect solvent for amplifying virtually any oyster’s special character. The juniper berry and herbal notes make the seafood flavors pop. Z’s Oyster Bar and Steakhouse’s oyster selection is almost always from West Coast species. I have seldom been there when Kumamotos are not on the list. Recently, they were joined by three varieties of the cucumber-ish Pacific species: Patriot Point, Stellar Bay, and Willapa Bay. So while I usually order Tanqueray or Bombay Sapphire (up, with a twist) to accompany East Coast oysters, the perfect choice with the Pacifics is Hendricks. Made in Scotland, the gin is infused with, most appropriately, cucumbers. Cheers!