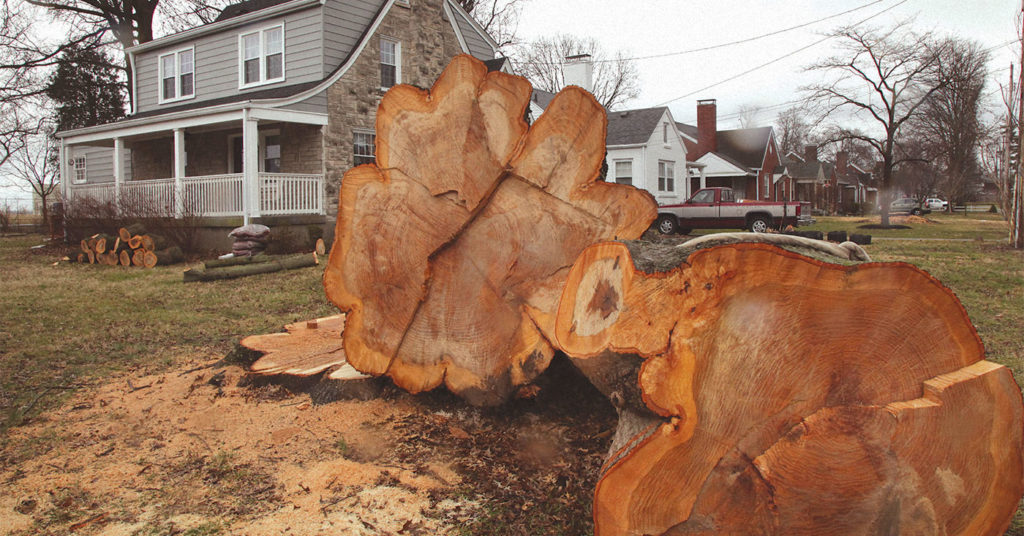 A pin oak on Drayton DrivePhoto by Michael Hayman

As Michael Hayman stood beyond the fence line at Bowman Field, making his case for preserving trees around the airport, a single-engine airplane took off, drowning out his arguments.

Minutes later, another puddle jumper took off, then another, and another.

Finally, a jet roared its way into the air, louder than the previous aircraft.

As the Louisville Regional Airport Authority pushes to remove the trees in the interest of pilot safety, Hayman said, residents fear the result will be aircraft coming closer to rooftops, all but destroying their quality of life.

Some residents are fighting the tree removal in the U.S. Court of Appeals. They are asking that a Federal Aviation Administration order issued last year, paving the way for the cutting, be set aside, claiming it violates three germane federal acts and other regulations.

Whatever the outcome of that petition, or even your opinion of it, many mature trees have already been removed around the airport, depriving residents of shade, stressing their property values and further diminishing an already depleted urban forest.

The Authority’s Bowman Field Safety Program is well underway. It calls for the removal of trees from Seneca Park, and other public rights of way and private property that it says are tall enough to pose a safety threat to pilots taking off and landing at Bowman.

Authority Executive Director Skip Miller said aircraft won’t come any closer to homes once the trees are cleared, because pilots are limited to strictly-defined flight paths.

“Those descent angles are fixed in space electronically, so no, you don’t get an artificial lowering of the aircraft for landing just because you’ve eliminated obstructions,” Miller said. “What you’ve done is you’ve eliminated a huge safety [threat].

“If people are afraid of what I call airplane-in-the-kitchen syndrome,” he continued, “the best way to deal with that is to eliminate the obstruction and give them a free and unobstructed path into the airport.”

But some Bowman neighbors aren’t buying it. Carol Kaufmann is one.

A 25-year resident of Carson Way, you could say Bowman is in her blood. Her father learned to fly there in 1938-39 before he joined the Royal Air Force in World War II, flying Spitfires.

And her brother, a U.S. Air Force veteran of Vietnam, was an observer in a B-52 crew and a navigator on other bombers.

Kaufmann is the lead plaintiff in a petition before the U.S. Court of Appeals for the Sixth Circuit to stop the tree removal around the airport. The petition contends that the FAA order of Dec. 13, 2016, which found “no outstanding environmental issues to be resolved,” violates the National Environmental Policy Act, the National Historic Preservation Act and the Department of Transportation Act, and should be set aside.

While the case is pending, tree removal has been halted from March 31 until Oct. 15 by order of the U.S. Fish and Wildlife Service to accommodate roosting bats.

Another resident, Carroll Grossman, said she, too, has seen planes come closer to homes. She watched one just last week come right over a neighbor’s rooftop.

“They weren’t on the flight path at all,” she said. “It is not rare; it happens with some regularity.”

Miller has dismissed these claims as matters of “perception.”

Kaufmann rejects the notion that trees taller than 30 feet automatically pose a risk to pilots. She said there are several examples of plane crashes involving trees in which pilots survived or even walked away.

In a quick online search, I found several news stories of such plane crashes, including one near Bowman in 2008, where the plane caught the top of a tree before flipping.

“All I can say is, thank God for trees,” WDRB reported one neighbor as saying at the time, “because it broke his fall and prevented him from going into someone’s home.”

To Miller, the airport authority has gone above and beyond to make up for the trees it has removed.

He said the Airport Authority would plant five trees for every one cut down on Seneca Park property, and three for one on rights of way around the airport. It is even planting trees where none previously existed, such as a portion of the bike trail that skirts the airport along Taylorsville Road.

And it is prepared to replace trees on private property at a 2-to-1 ratio — low-to-moderate canopy trees, he said, varieties that he said are more conducive to the lot sizes and proximity to the runway.

It’s a replacement effort that has attracted attention.

“That program is becoming somewhat of a model program around the country, talking to my counterparts at other airports,” Miller said. “Why? Because the FAA doesn’t recognize any of that. The FAA just wants trees gone. They don’t recognize, nor will they reimburse you, for any mitigation action that takes place after the tree removal.”

But Hayman thinks the Authority plan is far from a fair swap. To cut down a fully mature tree then plant a young tree in its place, he said, means years must pass before the lost tree canopy is replenished.

He estimates that 20 to 40 trees would have to be planted for every one mature tree taken down to replace or “mitigate” the lost canopy in 10 years.

“The mitigation is really important,” Hayman said. “Can we get the canopy back? How many trees do we need? And how long will it take?”

That’s an issue that attorney Tom FitzGerald has made in his petition to the Appeals Court, noting that the tree canopy removed around the airport were an “integral” part of the landscape.

“Replacing it with saplings, you have the loss of all the functions and values of this mature canopy, and the compensation they’re proposing does not adequately make up for the adverse impact of the removal,” FitzGerald said.

Kaufmann put it more succinctly, saying it’s not just the number of trees, but the species.